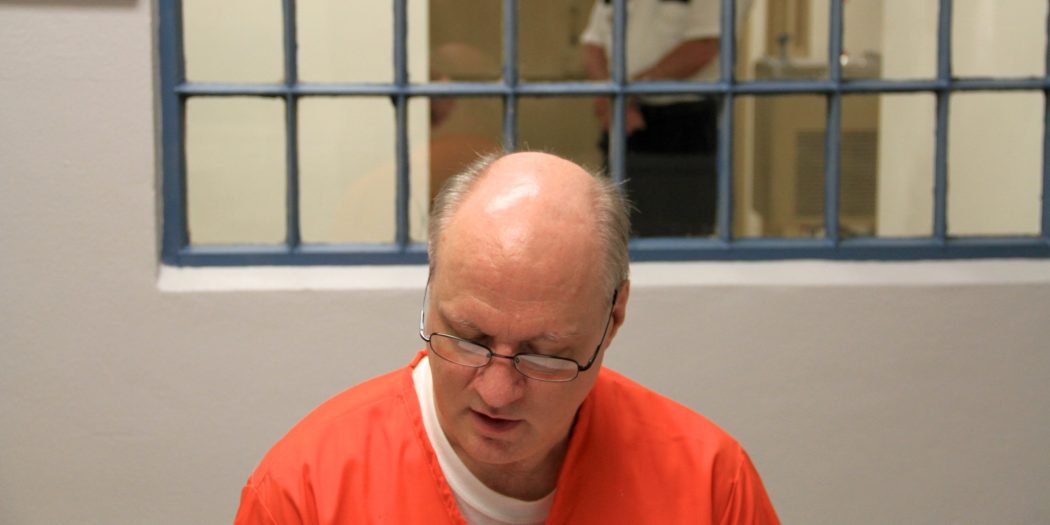 Michael Lambrix reads from a script at the Union Correctional Institution in Raiford. (Rebekkah Mar/WUFT News)

Michael Lambrix, a 57-year-old death row inmate, walked into the small room with a smile as he greeted the lieutenant standing by the door.

He’s in an orange jumpsuit, bulky handcuffs and prison guard by his side. The location: the Florida State Prison in Raiford.

Lambrix joked with the lieutenant saying this wasn’t his first interview. Later, he says, “This is your show, I’m just along for the ride.”

Lambrix has been on death row for 33 years. He was convicted in 1984 for two first-degree murders. He was sentenced to death for killing Clarence Moore with a tire iron and strangling Aleisha Bryant in Glades County in 1983.

This week, the U.S. Supreme Court decided against re-examining Florida’s death penalty as Attorney General Pam Bondi had requested, so Lambrix could again face execution in the coming years. Or he could appeal. Again.

Lambrix and his girlfriend, Francis Smith, met Moore and Bryant and invited the two to their trailer home. After Lambrix and Moore tried to prank Bryant, Bryant and Moore started to argue. The argument, according to Lambrix, escalated. Lambrix walked out and found Moore on top of Bryant, shaking her. In that moment, Lambrix hit Moore with a tire iron.

“Yes, you relive that night over and over again,” he says. “Regardless of the circumstances, if anyone possesses even a minimal measure of moral conscience, when you take a life, even if you believe you’re justified, you don’t get over it. It stays with you. It becomes a part of who you are. At the most unexpected moments, you relive that.”

Smith testified against Lambrix, confirming he killed Moore and Bryant. Lambrix later went on to claim that Smith was having an affair with an investigator. The trial court disregarded the claim after conducting an evidentiary hearing.  Another witness recanted her testimony, but the trial court deemed the recantation as unreliable.

Lambrix says he used to be very angry with Smith, but after 33 years, he’s over it. What he would do if he ever saw her?

“I probably would give her a big hug and tell her I forgive her,” Lambrix says. “She’s a victim too.”

Lambrix tried reaching out to Bryant’s family members, but he said they remained hostile, and they ordered the prison to stop any communication from him toward their family.

“I still think about them a lot and I still pray for them,” he says.

Despite his persistent claim of innocence for Bryant’s murder and for killing Moore in self-defense, Lambrix was sentenced to death.

During three-plus decades on death row, Lambrix filed several petitions, motions, writs and appeals to the state and federal courts. He filed appeals for his case based on ineffective trial counsel and the courts not looking at DNA evidence. Lambrix said the court denied the appeal that he’s entitled to DNA testing to prove innocence: “They have the evidence, but they refuse to test it. All they have to do is test the clothing that Aleisha Bryant wore that night for touch DNA.”

The Florida Supreme Court blocked his most recent scheduled execution in January 2016. Last year, the U.S. Supreme Court declared Florida’s death penalty sentencing as unconstitutional. The nation’s highest court found the state law gave judges too much power; Florida now requires a unanimous jury recommendation for the death penalty. The jury was not unanimous in its death sentences for either killing.

“We have a comprehensive innocence appeal that we will file the day after they deny rehearing, which will present solid scientific evidence substantiating my innocence,” Lambrix said.

Lambrix is now on a temporary stay of execution.

“Any day now, I can go back under an act of the death warrant and have a 30 day countdown to my next execution.”

The countdown will not start until the Florida Supreme Court addresses the pending issue of his rehearing. Right now, Lambrix is in what he calls “limbo.”

After recounting his story, Lambrix said even though he seems detached, once he goes back to his cell, he’s going to relive it all over again.

Editor’s notes: An excerpt featured in the radio feature is from the podcast script “Regrets Of The Dying: Mike,” created by Georgina Scull. Follow the podcast on Twitter @properpodcasts. After Rebekkah interviewed Michael Lambrix in prison, he sent a follow-up letter, which can be read below.

Rebekkah is a reporter for WUFT News and can be contacted by calling 352-392-6397 or emailing news@wuft.org.
Previous Westminster Presbyterian Could Become Gainesville’s First Sanctuary Church
Next Health Officials Move Ahead With Pot Process