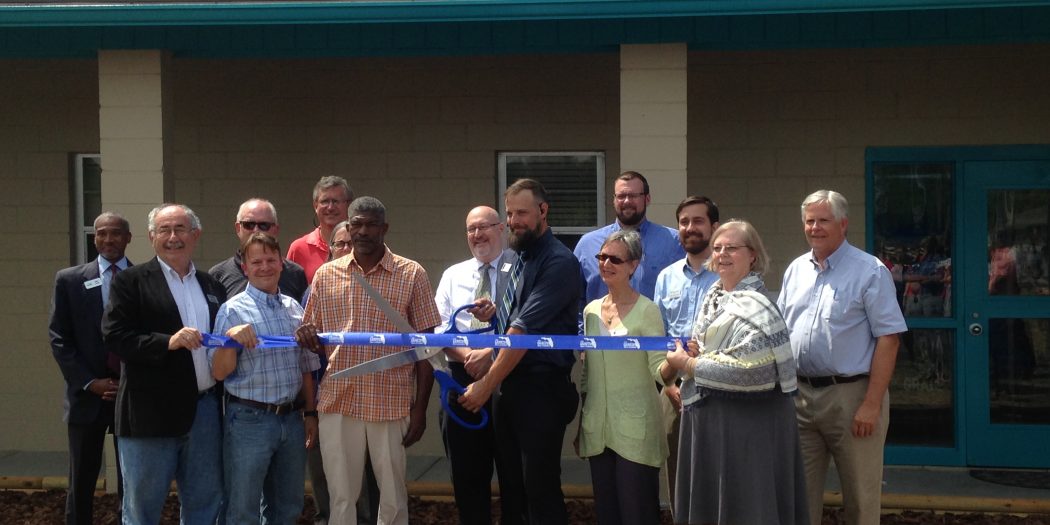 GRACE Marketplace Operations Director Jon DeCarmine gets ready to cut the ribbon to welcome the new community services center. He is joined with Gainesville City commissioners and GRACE staff.

If there’s one thing this building will do, it will save needed time for people from taking buses around town.

The GRACE Marketplace homeless shelter in Gainesville opened a community service center on Thursday for the benefit of its residents.

After 6 months of renovations, the center will offer veteran services, behavioral health care and assistance when applying for jobs, such as making resumes and finding outfits for interviews.

Donations from the community and the University of Florida helped fund the building.

Prior to its construction, residents had to leave GRACE campus near the Gainesville Regional Airport to attend services in the city. From GRACE, the trip can be about an hour walk or sometimes taking two or three buses to get there.

Another service offered is a women’s safe space. A room with various beauty products, showers and calming music looks to aid and rejuvenate women in abusive settings and relationships.

The operations director for GRACE Marketplace, Jon DeCarmine, said the addition of this building will help get people off the streets.

“I think the biggest impact that we see from moving all the services into one location is the reduction of homelessness,” he said. “It’s showing us that people can get the help they need that they weren’t able to access before.”

“A lot of GRACE residents have skills,” he said.

GRACE opened its doors for the needy in 2014. Since July 2016, it has seen an increase of GRACE and Dignity Village residents moving into permanent housing by 45 percent.

This building is a stepping stone to make the homeless escape homelessness.

“What it means to the community is that we’re taking more and better care of the people who need the most help,” he said. “We’re taking all the resources that we have to serve the most vulnerable citizens and get them off the streets and back into housing.”

Chase is a reporter for WUFT who can be reached by calling 352-392-6397 or emailing news@wuft.org.
Previous Find Out Florida: When Did Correctional Officers Last Receive A Raise?
Next Elizabeth A. Baker Makes Big Impression With Small Piano