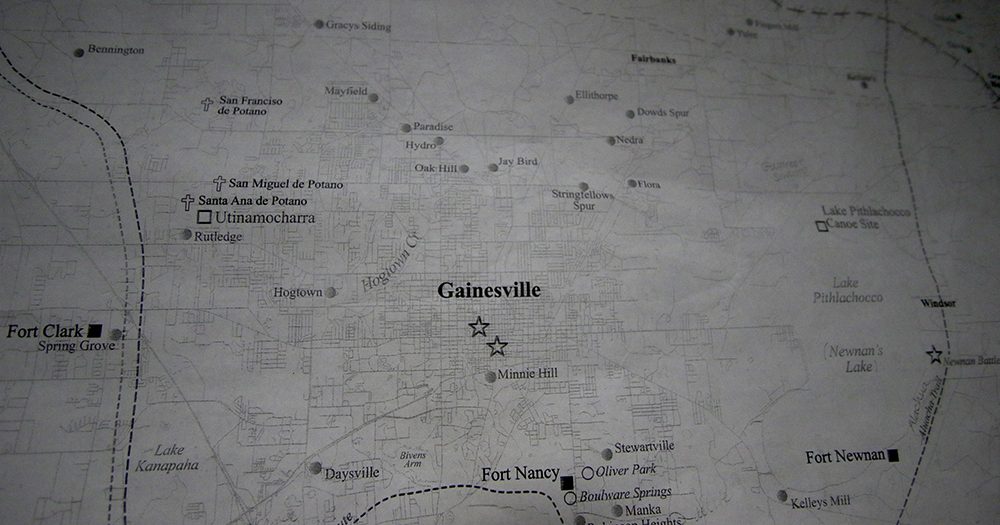 Where Was Paradise In Alachua County?

By Brooke Azzaro and Ethan Magoc

This story is part of Untold Florida, a WUFT News series built from your questions. Cynthia White asked us, “Among the lost towns of Alachua County is one called ‘Paradise.’ Where is (was) Paradise? Maps & texts place it vaguely in NW Gainesville.”

One hundred years ago, Paradise had lost its post office to nearby Gainesville, but it was still a stop on the Atlantic Coast Line Railroad.

The railroad passed on the northeast edge of the community, and the plat of Paradise featured dozens of parcels and several streets cutting north and south and east and west near the modern intersection of NW 13th Street and NW 6th Street.

We know all of this not from Google but from the work of Jim Powell at the Alachua County Clerk of Court, plus many volunteers. Powell has, for more than 15 years, overseen the digitization of thousands of pages of “ancient records.”

Powell volunteered in the late 1990s for then-Clerk of Court Buddy Irby. He transcribed what Irby thought to be difficult handwriting from the county’s ancient record index (years 1826 to 1848).

Irby asked if he wanted a full-time job. At the time, Powell built houses.

He initially declined because he didn’t think it would be fun “if I had to do it.”

His interest in genealogy meant he “knew the old hand,” and he eventually applied for a job and was hired in 1999. The work he and a handful of volunteers have done since allows us to know there was once a lumber company in Paradise, as well as a variety of Paradise-related issues heard before the Alachua County Commission. Those included construction of:

A Road leading from a point at or near Burnett’s Lake where the main public road from Hague to Alachua, crosses the western boundary line of said Special Road and Bridge District, thence in a southerly direction along said public highway or road through Hague to a point near Paradise, where said public road enters the road from Gainesville to LaCrosse hereinbefore specified, and the same to be built of sand, clay, limestone, oil, or their Equivalent;

And you think roads today are bumpy?

Today, Paradise is a mix of intersections, buildings, and paved parking lots, as well as one of the dozens of dots on this map of lost Alachua County towns that hangs in Powell’s office.

Brooke Azzaro is a reporter for WUFT News. She can be reached at brookeazzaro@gmail.com.
@brookeazzaro
Previous Culture In Crisis
Next The Invisible Disease: Post-Traumatic Stress Disorder