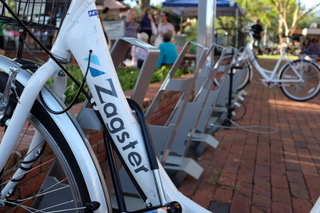 The City of Gainesville unanimously voted for a two-year, $62,000 contract extension for its bike sharing program in its commission meeting Thursday.

The contract extension will bring about system upgrades including updated station signs, bike baskets and a new solid-state lock that features the ability to lock from within the app and a design that prevents tampering. The commissioners discussed potential new station locations as well.

Five to six of those new stations discussed included spots on Santa Fe College and University of Florida’s campuses.

Helen K. Warren, city commissioner and mayor pro tem, said conversations with the University of Florida have been ongoing but the fact that the university doesn’t want advertising on the bikes has been a roadblock. In the meeting she stressed the importance of stations being available on campus.

“Really for this to succeed, we’ve got to get more involvement from the university,” she said.

Warren mentioned the importance of improving the marketing of the bike sharing program, which was another major point of discussion during the meeting.

District 3 Commissioner Craig Carter agreed that it is necessary to increase awareness for the program to move forward.

District 4 Commissioner Adrian Hayes-Santos suggested moving one of the stations to where it would have more foot traffic to increase awareness.

“We have thousands of people who actually go through Depot Park, but not Rosa Parks Transit Transfer Station,” he said.

When the floor was opened for public comments, Joseph Floyd, executive director of the Active Streets Alliance, brought up how the original contract didn’t require for Zagster, the provider of the bikes, to assist in marketing.

“At some point, if you want more butts on bikes, you need to hold them to providing some marketing,” he said.

The new contract consists of two annual installments of $28,000 will be paid by the city for the bike program.

Gainesville spokesmen Chip Skinner previously told WUFT that the extension of the program will not cause an increase in prices.

The initial two-year contract allocated $34,000 for the program’s rollout last May for 16 bicycles and two stations, one located at the Bo Diddley downtown plaza and the other at the intersection of the Sixth Street Trail and Southwest 2nd Avenue. Five bikes and two extra stations were added in August with Transportation Mobility Program Area funds.

Between the May launch of the program through the latest reported data in March, its users in Gainesville have completed 1,096 trips with an average of 4 trips a day, according to the city commission. The commission found that 92 percent of active users prefer the hourly membership rates over the monthly and annual plans.

The program generated about $3,600 in user fees between the launch in May and December.

Ryan Serpico is a reporter for WUFT. He's a University of Florida journalism student looking to see how technology is affecting our lives and society as a whole through reporting.
@zuckerco
Previous Questions Abound In Aftermath Of Former Gator, NFL Star Aaron Hernandez’s Death
Next Fireflies Podcast: A Personal Mental Health Story