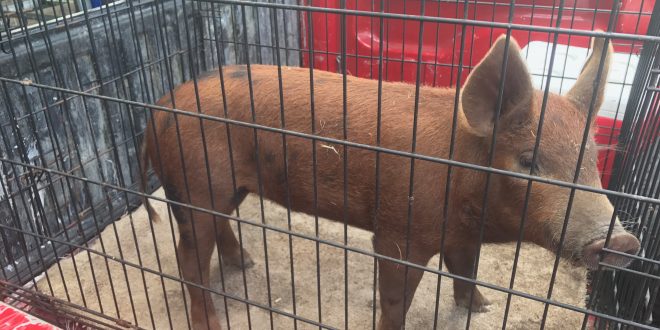 Miss Miller was on the run. Freedom tasted sweet. But by the end of the day, she ended up in custody once more, with two jailbreaks, resisting arrest and evading law enforcement on her record.

The brown, 35-pound pig was living on the Gainesville property of Vernon Boston, who had recently bought her as a pet when she escaped on April 12.

Boston’s son had set up her pen with the gate latch on the inside. As Alachua County Deputy Perry Koon would later point out, pigs are intelligent problem-solvers. Miss Miller saw her chance and took it.

She was a pig on the lam.

Later that day, Mary Edwards spotted Miss Miller in the yard of her twin sister, Martha Miller (no relation to Miss Miller), 2.5 miles away from Boston’s place.

“You gotta get out here,” Edwards told her sister. “There’s a pig in your yard.”

Then, it was time for the chase scene.

Martha Miller, her daughter Monica, her son Chuck, and Chuck’s friend Dee began running around the yard, trying to hem it along the fence that runs the length of the yard.

They ran around the left side of the house, but the pig ran faster.

They ran to the right side, but the pig still outpaced them.

They tried to flank it on either side. Still, she slipped past them.

Miss Miller was tired. Her stalkers sweaty. In one last effort, Chuck and Shutterly dove in from two different directions, cornering the pig and successfully coaxing her into a dog cage.

Things were not looking good for the convict. But she would bide her time. She had a plan.

Shutterly put the caged pig next to her police car as the group waited for the Alachua County Sheriff’s Rural Services Unit to come pick her up. Martha Miller gave the beast some food and water while her son used the hose to keep her cool.

“People were coming down the street and taking pictures of her,” Martha Miller said. “No one could believe a pig had gotten loose in our yard.”

As Deputy Koon rounded the corner in his truck to pick her up, Miss Miller saw her chance.

She broke down the cage door and bolted across the street into a neighbor’s yard. Koon is a professional, though, and he was not going to be bested by a pig. He and Shutterly took after her. Koon grabbed her by the hind legs.

Miss Miller was captured. Her day of running wild was over.

“I think she was happy because we fed her,” Martha Miller said. “We was happy. She was happy. But we all was tired, real real tired.”

As Koon was driving off, pig in custody, he leaned out his window and asked Martha Miller, “What do you think we should name it?”

But Martha Miller mistakenly thought the deputy had asked her what her name is, so she told him, “Miller. Miss Miller.”

“They named the pig after me!” said an indignant Martha Miller, who would’ve went with a more matter-of-fact name, like Little Brown Pig.

Miss Miller stayed in a holding cell at the Alachua County Sheriff’s Office — complete with food, water and a car tire — until a friend saw the office’s advertisement on local television about the pig and the effort to find her owner.

When Boston picked up the pig on Monday, Koon told him that Martha had nicknamed her Miss Miller.

“I haven’t named her yet, seeing as I just got her, so I guess it’s Miss Miller,” Boston said.

He paid the pig’s $80 impound and holding fees, brought her home and put her in a pen — with the latch on the outside.

“Way things are going these days, you don’t know whether to laugh or cry, and it’s good to have something to laugh at,” Martha said.