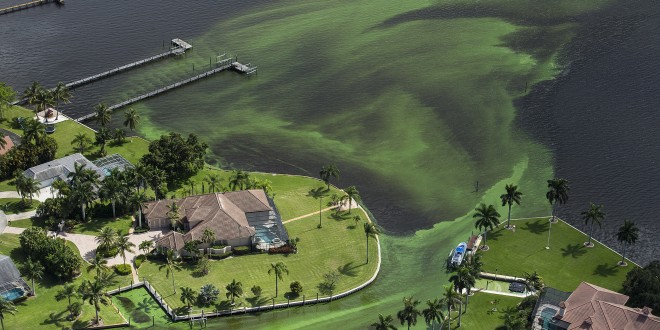 Algae enveloping an area along the St. Lucie River in Stuart, Florida, in 2016. Gov. Rick Scott said for the first time Monday that he supports having the state acquire thousands of acres to build a reservoir system south of Lake Okeechobee to help battle algae problems in the lake. (Greg Lovett/The Palm Beach Post via AP)

TALLAHASSEE — After sidestepping the issue for months, Gov. Rick Scott said for the first time Monday that he supports having the state acquire thousands of acres to build a reservoir system south of Lake Okeechobee to help battle toxic algal blooms.

The governor also announced he wants state legislators to set aside $200 million this year to help repair the aging federally operated dike that surrounds one of the nation’s largest freshwater lakes.

Scott’s decision to immerse him into the ongoing debate over Lake Okeechobee comes while the state Legislature is caught in a tug-of-war over how to deal with the so-called “guacamole” algae that fouled coastal waterways a year ago, causing national headlines.

The U.S. Army Corps of Engineers releases polluted water from the lake to lower the pressure on the dike to avoid a repeat of a 1928 hurricane breach that killed 2,500 people. Senate President Joe Negron’s solution to water woes is to pass an ambitious $1.2 billion plan to use agricultural and state-owned land to store water south of the lake instead of releasing it into coastal estuaries.

Scott has remained silent on the proposal as it has moved through the Senate, but now says he’s willing to support it with some conditions.

“Our environment and the local economy in south Florida were hit hard,” Scott said. “Businesses were hurt, our tourism industry was impacted and we have to continue to do all we can to make sure we keep enhancing the quality of our water.”

Federal authorities have been promising to fix the dike, but under current proposals the repairs would not be finished until 2025. In the past Scott has blasted the administration of President Barack Obama for failing to move more quickly on repairs. But now with the administration of President Donald Trump in power, Scott is willing to have the state put up $200 million now to expedite the repairs. He said this would help meet a goal of having the repairs done three years earlier.

Negron welcomed Scott’s support for his plan, but was somewhat skeptical about whether or not the federal government would repay the state for the dike repair. Negron said that “I want to make sure we do not spend hundreds of millions of dollars … on what is unquestionably a federal responsibility.”

John Campbell, a spokesman with the U.S. Army Corps of Engineers, said repairing the dike is a “significant public safety issue” in case it breaches, but he said ecological consequences have not been studied yet.

“We could be trading one ecological problem for another,” Campbell said.

While Scott said he now supports building the reservoir system, he does not support having the state take private property.

The Senate has already passed a bill (SB 10) that creates a reservoir system that could potentially take between 3,000 and 6,000 acres of agricultural land out of production. This has received pushback from the powerful sugar and agricultural industry, which often gives hundreds of thousands of dollars in campaign donations to leading politicians in Florida. U.S. Sugar Corporation late last month wrote a $100,000 check to Scott’s political committee. Since January, Scott has gotten a total of $300,000 from the two major sugar companies in the state.

A representative of the industry praised Scott’s approach Monday.

“In advocating for up to $200 million in dike repairs and using existing state-owned lands for future water projects, Governor Scott has shown he understands the importance of protecting lives and saving jobs by taking such a responsible position,” said Ryan Duffy, a spokesman for the Florida Sugarcane Farmers.