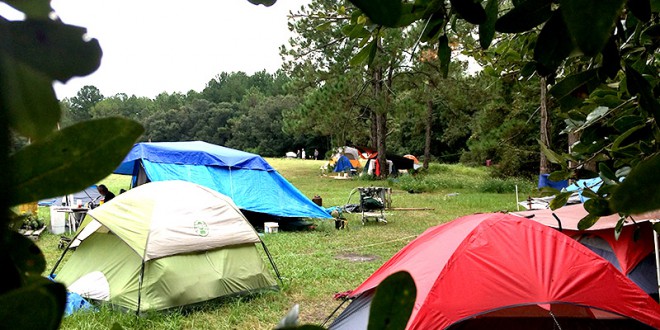 Tents at the Dignity Village homeless camp in 2014. Anthony D. Davis, who is accused of attacking a fellow resident at the camp in 2016, entered a plea of no contest in court today and will serve 12 years in prison, with credit for the year-plus he has already served. (File/WUFT News)

By Anna Collins and Kathryn Farr

An Alachua County man accused of attacking another resident at the Dignity Village homeless camp in Gainesville with the blunt end of an ax entered a plea of no contest in court today.

Anthony D. Davis, 43, appeared before Eighth Judicial Circuit Court Judge Phillip Pena on three felony charges of aggravated assault with a deadly weapon without intent, battery with two prior convictions and burglary of an unoccupied structure.

Davis was sentenced to a total of 12 years in prison: five for the aggravated assault charge, five for battery, and two for burglary. He received credit for time served since his initial arrest following the March 2016 attack.

In addition to the ax attack, which left a cut on the victim’s ear and forehead, Davis has been found guilty on 15 other charges since 2006, including shooting into an occupied dwelling, felony battery, burglary and resisting arrest, according to court records.

Effects from the coronavirus could intensify domestic abuse, according to domestic violence victim advocate groups.