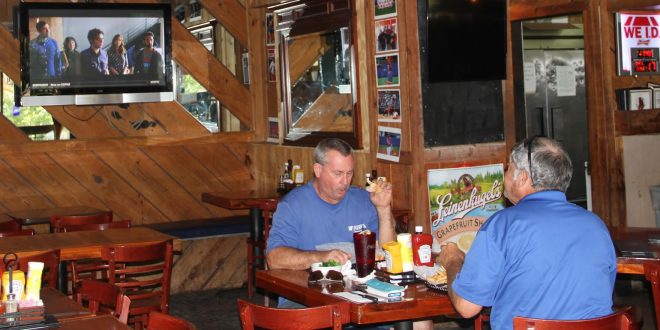 Long-time Copper Monkey patrons John Black (left), 58, and Gerald Brown, 62, eat at the restaurant and bar on Monday. The business has been purchased for $80,100 by the Rowdy Reptile bar, which isn't expected to retain the Copper Monkey brand. (Katelyn Newberg/WUFT News)

Legend has it that the restaurant’s name comes from when a man used to sit on University Avenue with a pet monkey, a banjo and a copper tin to collect change.

At least that’s what Averie Johnson, co-owner of the Copper Monkey since 2000, was told about the bar and restaurant’s origins.

Now, 37 years after its opening, the business on West University Avenue across from the University of Florida is set to close.

The owners decided to list the restaurant for sale on eBay on April 9. Johnson said it was bought on Thursday for $80,100 by the Rowdy Reptile bar, which is next door to the Copper Monkey.

Rowdy Reptile is set to take over on April 30. Changes are expected, Johnson said, but he didn’t know exact details.

“They’re not going to keep the Copper Monkey,” the 35-year-old said.

Business was doing fine, but construction along University Avenue in recent years has taken a toll on his and other local businesses, Johnson said.

“In this area for a hometown place, people don’t value you,” he said. “It’s sad. Gainesville’s becoming a totally different place right before your eyes.”

The restaurant was placed on eBay to give more people the chance to own a part of local history, Johnson said. Thirty-six bids were placed before the Rowdy Reptile eventually won the auction.

For John Black, 58, and Gerald Brown, 62, the restaurant’s closing marks the disappearance of another local business that they’ve come to love. The two work at UF’s Physical Plant Division and use their 30-minute lunch break to eat together about four times a week, often at the Copper Monkey.

They said they’ve frequented the restaurant for more than 30 years. Black will often skip around the menu while Brown always orders the same thing: a cheeseburger with provolone cheese.

“It’s like a place you go to all the time,” Brown said while the two had lunch at the restaurant on Monday. “The cooks are real good.”

Black said he intends to find a new place to frequent, maybe the newly opened Social at Midtown, which is just a few steps away.

But he said he’ll always remember the Copper Monkey, which he described as a quiet haven to grab lunch.

The owners are “getting to retirement years, and it’s about that time,” he said. “It’ll be missed for sure.”

Black was born and raised in Gainesville while Brown moved here about 35 years ago. They said they’ve seen changes in the city, mainly local businesses moving out and chain restaurants — like the McDonald’s further down University Avenue — moving in.

In its almost four decades in business, the Copper Monkey’s menu has changed, college-aged employees have come and gone, and the man with a monkey and a copper tin no longer wanders outside. But for Johnson, it’s the guests he’ll miss the most.

Katelyn Newberg is a reporter for WUFT news. She can be reached at knewberg@ufl.edu, on her cell phone at 407-766-2820 or on Twitter @k_newberg.
@@k_newberg
Previous Erich Farber, Solar-Energy Pioneer And UF Professor, Dies At 95
Next ‘He’s Seen A Lot Of History’: Hawthorne Vet Celebrates 100th Birthday