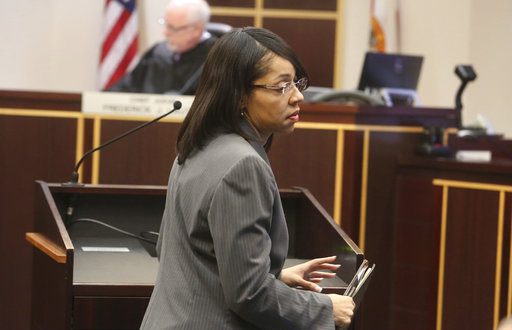 State Attorney Aramis Ayala in court in Orlando in March. The Florida House is backing Gov. Rick Scott in his legal battle with Ayala over whether the governor can redirect cases based on Ayala refusing to seek the death penalty. (Red Huber/Orlando Sentinel via AP)

TALLAHASSEE — The Florida House is backing Gov. Rick Scott in his legal battle against an Orlando prosecutor who refuses to seek the death penalty in cases handled by her office.

The state Supreme Court said today it would allow attorneys working for House Speaker Richard Corcoran to file legal briefs in the case between the governor and State Attorney Aramis Ayala.

Ayala is challenging Scott’s authority to transfer murder cases from her office to another prosecutor.

The Republican-controlled House in a legal filing to the high court said it wants to address “the ill effects that flow from” Ayala’s opposition to seeking the death penalty. The House may also argue whether Scott has the authority to suspend Ayala.

Ayala is a Democrat and Florida’s first African-American state attorney.

The Associated Press is a wire service to which WUFT News subscribes.
Previous Ocala Hospital Introduces Device To Help Heart During High-Risk Surgeries
Next Erich Farber, Solar-Energy Pioneer And UF Professor, Dies At 95