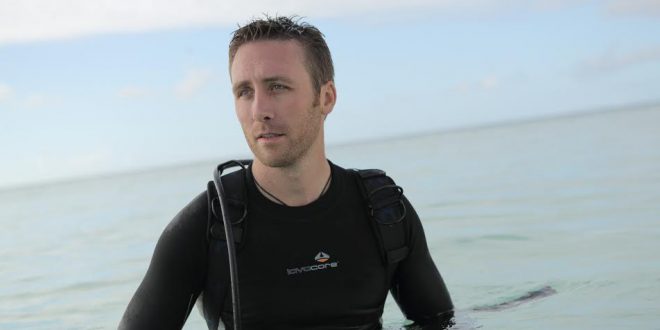 The Cousteau name is one steeped in environmental activism and innovation.

Philippe Cousteau Jr. is the grandson of Jacques Cousteau, co-developer of the aqua lung and a pioneer of marine conservation. His father, Philippe Cousteau, was a photographer and cinematographer specializing in environmental issues, and excelled at filming in various environments — in the air, underwater or on land.

Cousteau visited the WUFT newsroom this week prior to his Campus Earth Day Keynote Speech at the University of Florida.

He discussed the current state of the environment, his media productions and nonprofit organizations, and being at the scene of shocking events, such as the BP oil spill and the death of Steve Irwin, the Crocodile Hunter. Some responses have been edited for brevity.

WUFT: What is the legacy your grandfather left behind?

Cousteau: I believe that the legacy my grandfather left behind is one of problem-solving and innovation. A lot of people think of my grandfather as this pioneering explorer and filmmaker, and he certainly was all of those things.

But really, his story started out swimming in the Mediterranean after a car accident washed him out of the Naval Aviation program, which is actually what he wanted to do.

And then he wanted to share those images that he saw with people. So then he said, well, how do I do that? There were no such things at the time as underwater cameras, so he started to pioneer underwater cameras and then underwater film-making.

At every step of the way, my grandfather, if nothing else, was a problem-solver. As he advanced in his career, he saw the challenges and the problems that we’re facing in the environment and the decline in the health of the Mediterranean, the Red Sea and all of his old stomping grounds.

He was appalled and said well this is another problem we have to solve.

How does his legacy influence your mission to protect the ocean and promote a sustainable future?

Growing up with my grandfather and also my father, who unfortunately died a few months before I was born but left behind of canon of films and books, etc. — being able to watch those growing up, I was influenced by him, as well.

For me, it’s always been something that not only has it been a calling, but it’s been a joy.

When I was young growing up with the stories of the adventures that they went on all around the world, I thought to myself, “What could be better than this?” Being able to explore the world and see new places and culture, and then work to ensure their survival and sustainability.

Recently, it’s been in the news that about two-thirds of the Great Barrier Reef has been bleached. What steps can we take now to restore the coral reefs?

Four days ago, I was actually on the Great Barrier Reef off of Cairns, Australia, filming for one of the shows that I host, “Awesome Planet.” It is as bad as we’re hearing in the news. It was devastating.

The dives that I conducted, and the conversations that I had with scientists, confirmed that it’s just a sea of bleached white coral, much of it now overgrown with algae.

While some coral has survived, there are some small patches. It’s pretty devastating. In fact, a friend of mine this morning sent me the cover of a local newspaper in Cairns, Australia, and it said that the headline is “$1 billion blow to tourism.”

Again, this is a great example that the health of these systems is very important to our health. To tourism, to protecting coastal regions against storms, to providing food — coral reefs in particular, we destroy them at our own peril.

But this year has been unprecedented, and unfortunately, I think we have probably irreparably lost a considerable amount of that coral.

You are the founder of nonprofit organizations like EarthEcho International. How are these organizations helping to solve problems like this, and what are some obstacles you face as you operate your nonprofit, often acting against large private interests?

I think of myself as the product of good teaching. I’m not a Cousteau, I like to say, because of name on a birth certificate but because of the values that were instilled in me by my grandfather, by my mother and by some great teachers that I had growing up.

EarthEcho is an organization we founded in 2004 in honor of my father, Philippe Sr., with a focus on environmental education on youth.

I don’t ever meet a kid who denies climate change. I don’t ever meet students who deny the importance of protecting the environment. So that’s the good news: We don’t have to bridge that gap with that generation.

They want to know what we can do and engage in solutions, and so I think there’s a lot of hope and a lot of potential.

The challenges that we face are myriad, not only with a certain degree of special interest that would like to see the status quo maintained. Fossil fuels is a trillion-dollar annual business. That’s a lot of money. Money talks.

But on the other hand, there are a lot of organizations and corporations that we partner with that support our work and as a company. United Technologies is a good example that internally I know are doing a tremendous amount of work to try and build efficiency around their aircraft engines, for example, and are really concerned about education and sustainability, genuinely.

How did your time spent in media organizations such as CNN and Animal Planet help you to push your message? What shows have you worked on specifically that encourage people to have a more positive view about our future?

I host a series called “Awesome Planet” on Saturday mornings. It’s a syndicated show, [and] we’re in our fourth season. We have a new series called “Caribbean Pirate Treasure” that will premiere in August on Travel Channel that my wife and I are hosting.

I have a children’s book for younger, elementary-school-age students.

But you know what? Fear is a short-term motivator, and it doesn’t engage people. We want people to be inspired and excited about the adventure of exploring the world, and that’s really what our media programs, books and television shows, etc., really strive to do.

I also know that you’ve been in more unfortunate events covered by the media, such as the BP oil spill and the death of Steve Irwin, with whom, as I understand, you were recreationally diving while working on a documentary.

He was diving. I was on the boat while we were filming “Ocean’s Deadliest,” the show we co-hosted together for Animal Planet 11 years ago now.

How do you keep pushing even when things like this happen?

The experience with Steve obviously is something that lives with you. I was there when he passed away, and it was a terrible tragedy. We worked hard for several hours to try and resuscitate him, but the wound was too grievous into his heart from the stingray barb.

Steve was a great guy, and he died doing what he loved. My father also died in an airplane accident on expedition six months before I was born. He died under [a] similar type of circumstances: on expedition, a young man, he was 39 years old, had a little daughter and a baby boy on the way. And Steve had a little daughter and a little son. Both of them passed away in tragic circumstances, leaving behind a legacy and a family.

Growing up with my father’s death and witnessing Steve’s reminded me of how precious the time we have on this world is and that we cannot waste it. So rather than causing me to be worried about this kind of work that can be hazardous at times, I really chose it as a reminder to embrace it and to embrace the world and continue to take risks.

You never know when your time is up, and it could be walking across the street or it could be on an adventure helping the world learn something. And I would much rather it be the latter.

I think that those experiences have driven me forward and made me more determined — and so have crises like the Gulf of Mexico, the BP oil spill. We were the first ones to dive into the oil live on television with ABC’s “Good Morning America” and Sam Champion and then again with CNN. It was an idea I had because all the news agencies I was watching a few weeks after the oil spill were saying, “Hey the EPA and the government is applying dispersant to the water to make the oil go away.”

I remember [the phrase] “Go away” sticking in my brain. And I was like, how can they say this?

A: There’s no such thing as “away.” Nothing just disappears. It all goes somewhere from plastics, to trash and oil and pollutants, and I wanted to show that.

So I contacted ABC and Sam was a friend of mine, and he was a correspondent for and host for “Good Morning America” at the time, and we went in with full HAZMAT equipment on and showed that the dispersant, all it does is make the oil break from the surface and break up into these little balls and disappear.

It goes away, out of sight. And people know that — out of sight out of mind — but it doesn’t make it go away. Seeing that also made me more determined to tell these types of stories because you can’t just rely on what you see on television and believe that everything is true.

We have to go out and inquire and ask questions ourselves and really get to the bottom of these issues.

Samuel is a reporter for WUFT News who may be contacted by calling 352-392-6397 or emailing news @wuft.org
Previous Officers Promote Literacy In The Community
Next Activists Push For Ex-Felon Voter Rights Restoration