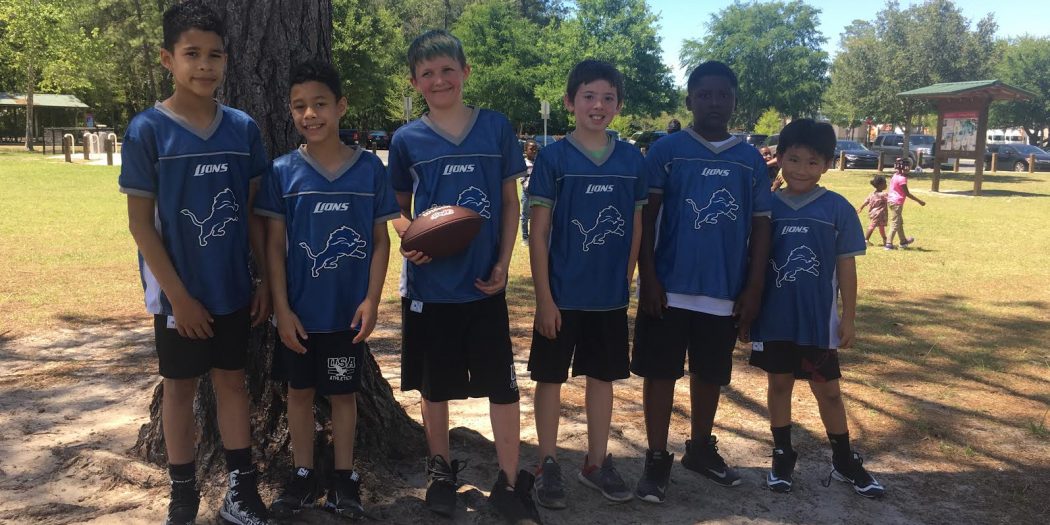 Nine-year-old Johniel Delgado knows what it takes to play football. “Teamwork equals the dreamwork,” he said after his first flag football practice.

Johniel practices alongside his brother Alejandro, a self-proclaimed “ball hog.” Alejandro said he was happy to learn how to better his team, the Lions, with the help of his teammates.

The boys are on two of the 14 teams registered for a new flag football league in Gainesville.

National Flag Football is the largest youth flag football organization in the country. Vito Tiberi, the league’s Florida regional manager, said the NFL-affiliated organization provides every player an opportunity to compete in each game.

“Our league is an instructional league for parents who don’t want their kids to play tackle, or they want them to get a little more of the fundamentals down before they let them play tackle,” Tiberi said.

Tiberi said since flag football is a non-contact sport, the kids are less likely to get hurt.

“There is no guarantee that the kid is not going to get hurt, but in the same token it is flag football, it is no-contact, it is instructional and it’s a recreational league,” Tiberi said.

According to a Boston University School of Medicine study in 2015, former National Football League players who played tackle football before the age of 12 were more likely to suffer memory and thinking problems as adults than those who did not.

With this in mind, parents at a meet and greet for the league Sunday happily watched their children compete in the non-contact sport.

Alisha Hargon said she was relieved to have her son and nephew play a sport that had little to no risk of injury.

“I don’t really believe that two bodies should hit in the force that they do at this age, and not knowing the real effects of what happens to them now in the long run,” Hargon said.

Rod Clark, the Gainesville site director for National Flag Football said he played tackle football in both high school and college, but would like to promote flag football to a wider age group.

“I’m a big promoter of flag football…it does allow the kids to actually fulfill that desire to actually play but minimize the risk for injury,” Clark said.

He said the program has strict rules to maintain the kids’ safety. Any kind of purposeful physical contact, like pass interference, will result in a penalty, he said.

“We definitely want them to actually learn how to pull flags, how to be safe, and play the game without contacting,” Clark said. “The coaches are emphasizing those things.”

The program allows teams of boys and girls to play with students from the same school and grade. Clark said this teamwork should transfer into the classroom.

“Whether it is football or basketball or anything like that, sports are supposed to teach life lessons like teamwork and accountability,” Clark said. “I can’t see how it wouldn’t transfer from the classroom to the field and from the field to the classroom.”

If qualified, there is financial assistance for the program and with the registration fee. Each participant receives an NFL reversible logo jersey and flag belt.

Practices and games are held every Sunday at Possum Creek Park.

Jessica Schein is a reporter for WUFT News and can be reached at (352)-392-5551 or jschein@ufl.edu.
Previous Gov. Scott Announces State Of Emergency As Wildfire Numbers Continue To Rise
Next Afternoon News In 90