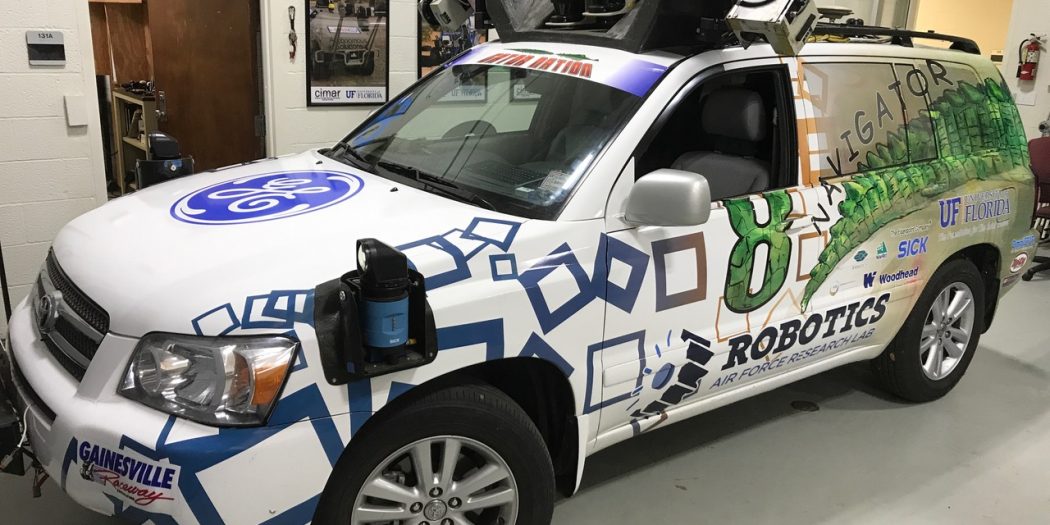 The University of Florida Department of mechanical and aerospace engineering’s modified Toyota Highlander. Under special conditions, the autonomous car had been on the streets of Gainesville, even passing by Ben Hill Griffin Stadium. (Ryan Serpico/WUFT News)

This summer, you may see automated trucks hitting Florida roads as a result of a bill passed by the Florida legislature.

Tuesday marked the one-year anniversary of Gov. Rick Scott approving HB 7027, a bill that loosened restrictions on automated vehicles in the state of Florida in an effort to increase testing of autonomous and connected vehicles.

One of the conditions the bill called for was for Florida’s Department of Transportation to begin testing of a driver-assistive truck platooning technology.

Truck platooning is where trucks closely follow behind one another in order to save fuel. The front truck lessens air resistance for the truck behind it.

“Basically, it’s like a super cruise control,” said Dr. Carl D. Crane, III, a professor in the University of Florida’s mechanical and aerospace engineering department. The university was chosen last year to study truck platooning technology and to build the summer pilot program.

The trucks that Crane and his team are working on are not autonomous in the sense that they drive themselves but in the way that they communicate to one another.

Crane said that each truck sends a heartbeat signal to the other so that if one stops signaling, the other will know that something is going on.

“The idea is that if the front vehicle is to suddenly to hit the brakes, you need the other one to respond,” he said.

Crane said that the study is wrapping up now and that the location for the summer pilot program hasn’t been set yet. He said that it will most likely be on a roadway that isn’t too dense with other cars.

Another effect of the bill that has been seen by the department of transportation has been the level of interest of manufacturers in the auto industry that are looking for places to test their automated vehicles.

“They call all the time,” said Ed Hutchinson, manager of the Transportation Statistics Office at the Florida Department of Transportation.

He said that the Florida Department of Transportation is looking at UF as the test bed for the state’s autonomous vehicle programs. He cites the fact that the industry is looking for a place to test different types of technology in an active environment.

He said that Gainesville is a perfect place because of the number of pedestrians and bicyclists that are around.

Going into the future, Crane believes that better coordination between states is needed to further the autonomous vehicle industry, not only in Florida, but across the country as well.

“If state A does something, and state B has an entirely different set of rules, that’s going to cause problems,” he said.

State Sen. Jeff Brandes, who is the chair of the Florida Senate appropriations subcommittee on transportation, tourism and economic development, pushed for the autonomous vehicle legislation last year. In an email, Brandes’ chief legislative assistant, Chris Spencer, said that while the federal government is currently working on new autonomous guidelines, he and Brandes hope that the government will appreciate the work that the states have put in.

“As states like Florida continue to lead on the policy front,” he said, “we hope that federal regulations will embrace the work done by the states,”

Ryan Serpico is a reporter for WUFT. He's a University of Florida journalism student looking to see how technology is affecting our lives and society as a whole through reporting.
@zuckerco
Previous Bronson Resident Finds Trash Dumping Ground Close To Her Home
Next Apr. 7, 2017: Afternoon News In 90