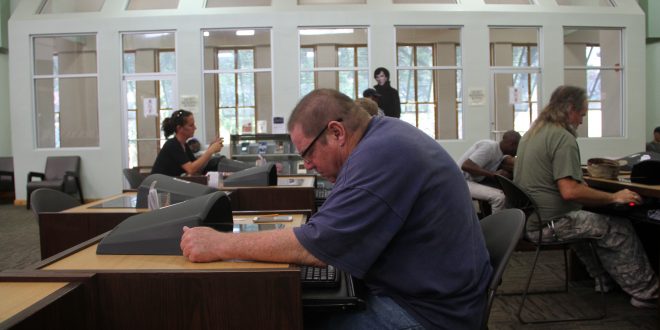 Mark Roy, of Gainesville, uses a computer with free internet access at Alachua County Library District Headquarters in downtown Gainesville to look for employment. Internet options across the county are numerous, but spotty service, high prices and limited reach of some have created frustrations among many residents. (Nealy Kehres/WUFT News)

Internet In Alachua County: The Options, Prices And Opinions

“We get emails all the time from people who are upset about their internet connectivity and the high prices,” city Commissioner Adrian Hayes-Santos said after a February commission meeting that explored the issue. “They want something better, and we should do better.”

Hayes-Santos used the issue as a platform on the campaign trail in 2016, pledging to do what he can to improve access for his constituents. Other city commissioners have acknowledged the problem and are also searching for solutions.

Some frustrated residents have even joined forces to create an organization, Connected Gainesville, dedicated to providing better options on the belief that “affordable broadband internet access is a necessity, not a luxury.”

To present those in the county with the options available now, WUFT News has compiled a list of the most commonly used providers — along with their prices and speeds — and has talked with customers to learn the pros and cons.

Price: $40 to $80 per month for new customers (not combined with other services). Increases by $10 after the first 12 months.

Dhyana O’Driscoll said the quality of her service has been inconsistent between her former and current houses.

Before moving into a single-family house in northwest Gainesville, she lived in a townhome community just a few blocks away that had access to AT&T fiber optic.

“It was a great feature,” O’Driscoll said. “I never had a problem with it.”

But in her new neighborhood, fiber optic isn’t available, so she had to downgrade to the slower DSL service.

Within the first two weeks, O’Driscoll knew DSL wouldn’t work for her and her daughter’s needs, so she cancelled it and switched to COX’s cable internet.

Meanwhile, O’Driscoll has been battling with AT&T customer service. She said the company has continued billing her for the service for months and won’t allow her to return her AT&T router.

“Sometimes, I would be on the phone for an hour being passed around,” she said, “and then, some people would hang up on me when they didn’t have anything they could tell me.”

O’Driscoll said she still hasn’t resolved the issue with AT&T and has considered reporting them to the Federal Communications Commission.

But Micanopy resident Camille Scochier said she has had a much better experience with AT&T in her decade with the service.

“We’re pretty happy with it,” Scochier said, “and anything is better than the dial-up we had before.”

O’Driscoll said that if she was to offer a pro about AT&T, it’d be that the service is good for light internet users who “look up the occasional thing or send the occasional email.”

COX Communications offers internet, cable television and home-phone services throughout Alachua County. For many residents, like Francis Wanzenberg, COX is the only provider that offers the right combination of services.

The northwest Gainesville resident said she has been displeased with COX internet for years. She said she and her family considered switching to AT&T, but because AT&T doesn’t offer cable television in her area, they would have to pay for the two services separately, which would significantly increase their monthly bills.

COX offers customers bundle packages, which provide discounts for using multiple services. AT&T also offers bundle packages, but its television service in Gainesville requires a satellite, which Wanzenberg said wouldn’t work at her house because too many trees surround it.

Wanzenberg said COX has increased its prices multiple times since she’s been a customer. One time, she became so frustrated that she threatened to cancel her service with the company.

COX was able to negotiate with her and convince her to remain a customer, but Wanzenberg said she doesn’t believe that will be the last time she will face a problem over price with the company.

“I’ll be happy with them for another year,” she said. “But then they’ll increase my price, and we’ll get into another fight again.”

Wanzenberg said the worst part is that COX’s internet quality is poor, but she doesn’t have another option.

“That’s the thing: [The service] is not that great,” she said. “It goes out all the time. We have to refresh it all the time. I’ve got two kids in high school and college that need it, and I would not say I’m a really happy customer. But what’re you gonna do?”

But O’Driscoll said she has been pleased with COX since switching from AT&T because the former offers better service, allowing her daughter to stream videos without any problems. She was drawn to COX by a friend who could send photos more easily with the service.

COX “is great,” O’Driscoll said. “I don’t have any complaints at all. I’ve never had an issue.”

Speed: Up to 25 megabits per second.

Data cap: Up to 50 megabytes monthly of high-speed internet, and unlimited dial-up speed once those megabytes are used.

Satellite internet is a good — or perhaps the only — option for people in rural areas in which other services aren’t offered. Trees surrounding a house, though, could prevent the service from being offered.

The speed is noticeably slower when compared to the options available in and around cities, but it is still fast enough to stream movies unimpeded during the first 50 monthly megabytes. Streaming after that (the dial-up period) requires pausing and letting the video load.

Price: Included in rent of apartment complexes for almost all Gator Net properties (seven “optional communities” don’t include the Gator Net’s price in rent, so residents wanting the service at those must pay $34.99 a month initially).

Speed: 50 to 1000 megabits per second, depending on community.

Gator Net provides internet service to more than 50 apartment and condo complexes in Gainesville, with many near the University of Florida. It boasts an entirely fiber-optic network and being the only internet service provider in the city to offer “symmetrical service,” or equal upload and download speeds.

UF sophomore Brooke Schwartz, who lives in an apartment complex just east of UF with Gator Net, said she appreciates that her internet is an amenity included in the price of her rent.

She said she has been satisfied with the service because it has never gone out. However, the speed isn’t always fast enough to keep up.

“Sometimes, streaming Netflix is blurry,” Schwartz said. “But other than that, it’s been pretty reliable.”

Price: Varies depending on provider. (Gainesville customer Cassandra Ward said she pays MetroPCS about $60 a month for 10 gigabytes, including regular cell-phone service.)

People on the go sometimes pay to use their cell phones as Wi-Fi hotspots to provide their computers with the same internet service as their phones.

Hotspots, which also come in the form of a standalone device, usually have low data caps, severely limiting the customer’s internet use.

Ward, a University of Florida graduate student who lives just outside campus, said she decided using her MetroPCS cell phone as a Wi-Fi hotspot is the best internet option for her and her daughter.

“From the research that I did, for what you have to pay for the other companies and their reputation, it just wasn’t worth it to me,” she said.

Ward said her $60-a-month bill includes cell-phone service and unlimited data on her cell phone, but her hotspot usage is limited to 10 gigabytes of data monthly. And then, every additional gigabyte costs an extra $5.

Ward said the limit isn’t a problem for her because she restricts herself to use Wi-Fi only for homework. When she used it to stream Netflix in the past, she ran out of data too quickly.

If Ward is still in Gainesville when her daughter is old enough for school, she said she will have to reevaluate their internet situation.

“Her needs always come first,” she said, “especially if it’s for her education.”

Type: Fiber and cable from GRU or COX Business.

Alachua County’s libraries are an internet option for those who don’t have access at home or can’t afford it.

All county libraries offer free high-speed internet to the public.

“In some of our rural communities, they may not have internet service available, or if they do have it, it’s limited or it’s not affordable. … So they go to the library to use the service,” said Nickie Kortus, an Alachua County Library District spokeswoman.

Gainesville resident Mark Roy, who was using the internet at a computer at the downtown Gainesville branch Wednesday, said he comes to library because he doesn’t have internet at his house.

“I mostly use it for job applications and employment,” Roy said.

Kortus said Wi-Fi is available outside after the libraries close, so people can use mobile internet devices after hours if they’re within range.

Customer Teresa Peattie, who lives near LaCrosse, said she is satisfied with the service.

The internet goes out occasionally, like during a storm, and over one period of time, her family lost the connection frequently. But Windstream sent a technician to their house two or three times to determine the problem and was eventually able to fix it.

Peattie said she was pleased with the way Windstream handled that situation and with its customer service overall.

Occasionally, Peattie’s bill is bumped up by a few dollars, but it has never been enough to push her to investigate other providers.

“Overall,” she said, “we’re happy with it because we don’t need a super sophisticated thing for what we use the internet for.”