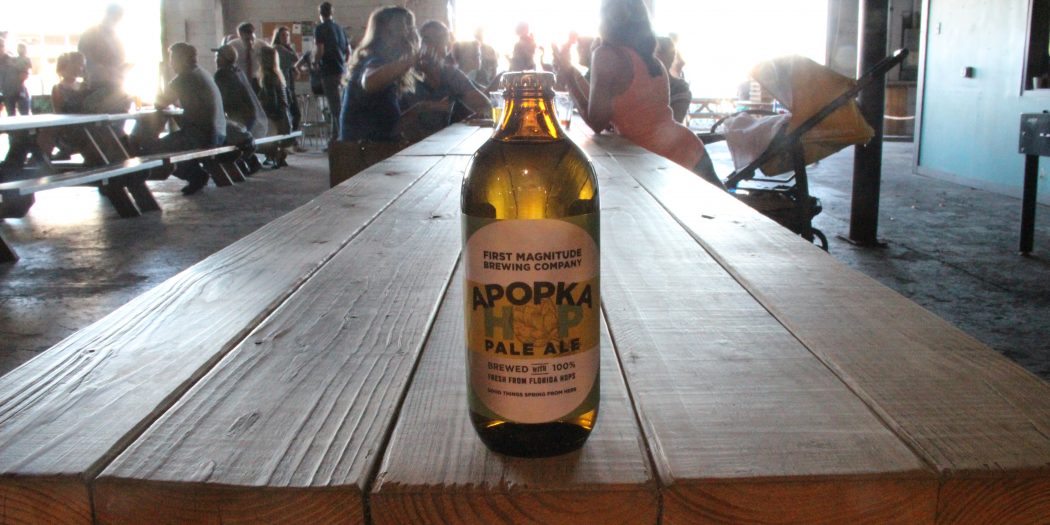 The “Fresh From Florida” logo, often found displayed throughout the eastern United States on agricultural items produced by small Florida farmers, has found its way onto an unexpected product: beer.

The beer’s name is Apopka Hop Pale Ale, and its origin story dates back five years.

Brian Pearson, assistant professor in the Department of Environmental Horticulture at the University of Florida, and hobbyist home brewer, said the idea came to him when he was at his house on a Sunday afternoon.

“One day I was making beer in my back yard, and I was adding hops, when I looked around my yard thinking, ‘ Why can’t I grow hops and use some local hops?’” Pearson said.

Hops, or the flowers of the hop plant Humulus lupulus, are the bitter ingredient brewers use in beer to balance the sweetness of the sugars produced by barley.

Pearson said at the time, it was believed hops couldn’t grow in Florida, and that they would not be successful.

Because there was such little scientific research on the subject, Pearson said he took out his wallet and bought a few plants of his own to see if he could grow them. He was successful.

So successful, in fact, that he and his team at the Mid-Florida Research and Education Center, an off-campus research facility in Apopka, Florida, were awarded a $158,000 grant from the U.S. Department of Agriculture on Jan. 1, 2016.

The grant, which was administered by the Florida Department of Agriculture and Consumer Services, runs until December 2017, and has allowed Pearson to grow and study different varieties of hops in large numbers and replication.

“We were looking to see how the hops would grow, what the yield would be, and the quality,” Pearson said. “And so we collected our data, and we had leftover hops.”

So Pearson called First Magnitude and asked the brewers if they would be interested in using the leftover hops to create the first beer with the Florida hops label.

“When I contacted the brewery and said ‘you know, I’ve got hops, would you like to partner with this beer?’ they were obviously very excited,” Pearson said.

And they had good reason to be.

Chris Denmark, development representative for the Florida Department of Agriculture and Consumer Services, said the Fresh From Florida logo is recognized worldwide.

“Just being able to identify with an established brand, such as ‘Fresh From Florida’ – that’s a major benefit to the breweries,” Denmark said.

Creating this beer would not only be exciting because it had never been done before, but because it could also be good for business.

John Denny, the head brewer at First Magnitude who came up with the name for the beer, said more people are interested in buying local products.

“It’s a fresher product, and it’s something that people are excited about,” Denny said. “They want to support local farmers and the local economy.”

Because Pearson only had three and one-half pounds of leftover hops, Denny said they were only able to make about a barrel of beer, so the Apopka Hop Pale Ale was a very limited release. Denny is excited for the future though.

“This is the very beginning of what I hope is a great relationship,” Denny said.

Syama Allard is a reporter for WUFT news. He can be reached at 352-256-8749 and at sallard108@ufl.edu
@Syama Allard
Previous OCD Patients Helped By Online Therapy, Review Finds
Next UF Graduate Assistants Rally Against Healthcare Changes