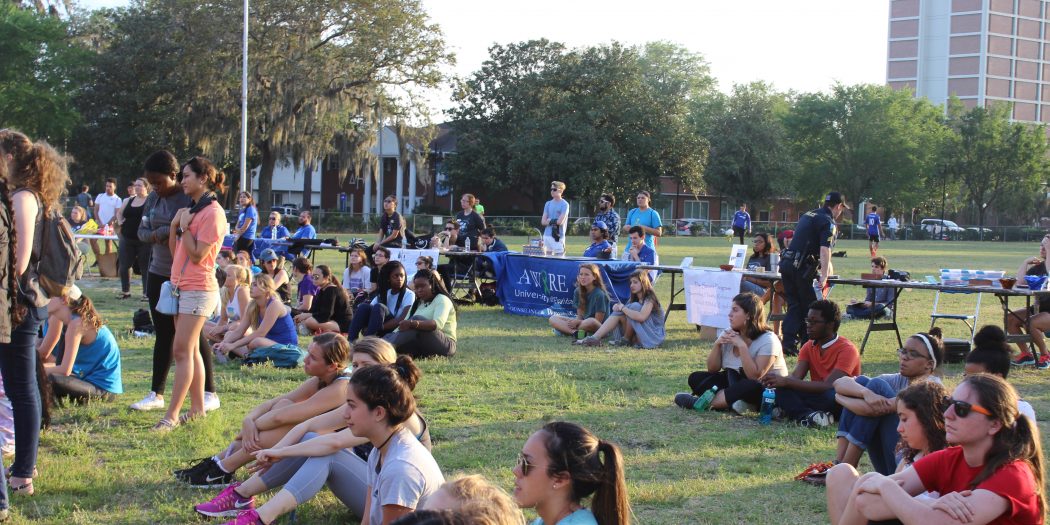 Attendees find seats on the grass during the open mic portion of the rally after rows of seats in front of the stage fill. "It takes a special kind of courage to get up there and tell everyone," Livia Ledbetter, a 19-year-old sociology sophomore said.

As the sun set on Norman Field Wednesday night, the University of Florida club football team counted off during stretches, a group of students scrimmaged in a soccer match and Peter Nguyenho stood before hundreds of students to explain the bandages on his arms and hands.

“From when I was 7 or 8, I briefly remember a very disturbing memory of my childhood,” he said. “I don’t really remember a whole lot of it. Perhaps I blocked it out or forgot about it.”

There was a pause, and he apologized for having to collect his thoughts. He hadn’t prepared anything when he decided to speak, Nguyenho said.

“I was home alone with my uncle from my mom’s side of the family, and I thought he was a pretty cool guy. He wasn’t a cool guy – not at all. There are things that he’s done to other people – including me and my brother – that are pretty messed up,” Nguyenho said. “Essentially he sexually assaulted me, and I’ll leave it at that. He’s done to me things that I didn’t really think you would do to another human.”

Nguyenho said he never told anyone in the years that followed, but he’s since struggled with anxiety and depression. When he got to college, more than ten years after his assault, the first person he told was his girlfriend. The second was his therapist.

“It feels good to let people know this. Shame comes from two things: secrecy and silence,” Nguyenho said. “I’m still trying to process through it, and that’s okay.”

The crowd applauded, and Nguyenho walked off the stage and toward his girlfriend, who was staffing the event. In the silence between speakers, rap music from the football team’s practice and the chatter from students entering the parking garage filled the space. Another student tapped the microphone, and someone else’s story took life on stage.

STRIVE (Sexual Trauma/Interpersonal Violence Education), a peer education program within GatorWell, hosted their annual event Take Back the Night March and Rally to End Sexual Violence on Wednesday at 5:30 p.m.

The group partnered with over a dozen other entities ranging from the UF Counseling and Wellness Center to the university’s Disability Resource Center to provide support, education and resources.

The night began with activities and tabling hosted by each organization before Juliun Kinsey, Green Dot GNV’s coordinator, addressed the crowd as STRIVE’s keynote speaker. Green Dot GNV is the Gainesville chapter of an organization dedicated to reducing personal violence. He spoke about the power of secrets, Green Dot’s mission and the importance of action.

Historically, halfway through the rally, participants join in on a one-mile-long march before returning to Norman Field. However, due to predicted stormy weather, STRIVE and UFPD had to cancel the march portion for safety purposes. Still, chants broke out among the crowd, calling for an end to sexual violence and assault.

After the chants, STRIVE began an open mic portion of the night, where eighteen students came forward to share stories of their own experiences with sexual assault and violence.

“How do you get hard off a body that’s not moving? Not kissing you back?” one student said of her assault by a student athlete.

“My senior year (of high school), 12 days after my friend Nathan shot himself, I drove to my boyfriend’s college because it was Valentine’s Day and I thought that’s what a good girlfriend does,” another student said. “I was drinking to forget the panic attacks and the anxiety and everything that followed with it. I remember laying in his bed, not even able to talk and knowing that he still did things to me. Sexual coercion is not consent.”

In April 2015, UF participated in the Campus Climate Survey on Sexual Assault and Sexual Misconduct, alongside 26 other members of the Association of American Universities. This survey aimed to gauge students’ understanding and experiences surrounding sexual violence.

According to the data, one in five female undergraduate UF students had experienced some form of sexual assault. In 92 percent of all cases the perpetrator was another student. More than 70 percent of students said they knew their attacker.

Lena is a reporter who can be contacted by calling 727-534-6278 or emailing l.schwallenberg@ufl.edu.
@@l_schwallenberg
Previous April 6, 2017: Afternoon News In 90
Next Officials, Middle Schoolers Discuss Legal Process For Justice Day