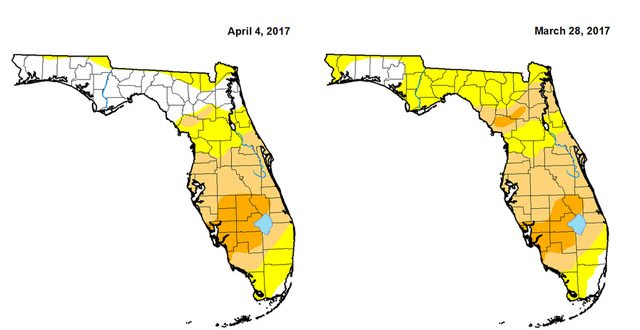 Roy Chandler retired to free up more time to fish.

The 63-year-old left his job as a national accounts manager at Carquest Auto Parts in Virginia and moved to Florida for the sole purpose of casting and reeling.

But he remains a snowbird and spends his summers up north and his winters in White Springs in Hamilton County.

Florida’s recent drought, though, has impacted his snowbird fishing.

“The whole area has been impacted,” he said Thursday while fishing on the banks of Lake Eagle in White Springs, “and I’m just not catching fish.”

Yet after the 2.74 inches rain so far this week, a number tallied at the Gainesville Regional Airport, fishing conditions seem to be looking up.

Chandler and his friend Robert Wolf, 71, headed straight for Eagle Lake Thursday following the rain. During a scorching drought, fish go deeper in the available water to avoid the surface heat, putting them farther from fishing lures, especially those cast from banks.

“We came out today,” Wolf said, “because we knew the water would be up and the fishing would be good.”

Eagle Lake and nearby Lang Lake are scheduled to close April 14 because of falling water levels. But this may change thanks to the rain.

Florida Fish and Wildlife Conservation Commission and the fertilizer company PotashCorp, which owns the two lakes, will discuss Monday whether they’ll close, said Karen Parker, a spokesperson for the commission.

PotashCorp Manager of Public Affairs Mike Williams said that when it comes to the lakes, the company balances public access with environmental protection.

“We love sharing the lakes so that people can use them and so all these things,” he said, “but we have to temper that with making sure we don’t mess up anything environmentally.”

The rain comes as some parts of North Central Florida have been seeing severe-drought conditions, said Amanda Holly, a WUFT News forecaster. But those parts are now in a moderate drought at worst, she said.

The only counties still in severe droughts are in southern Central Florida.

“The rain certainly helped in the past three days,” Holly said.

Wolf said that with the rain, he is hopeful Eagle Lake will remain open.

“Fishing isn’t a matter of luck. It’s a matter of skill,” he said. “But you can’t fish if you don’t have water.”

Monica Humphries is a reporter for WUFT News and can be reached at 407-256-6899 or monicamh@ufl.edu.
@https://twitter.com/MonHumphries
Previous Putnam County To Reduce Transportation Funding To Middle, High Schools
Next UF Students To Skydive With Teddy Bears For Children At Shands