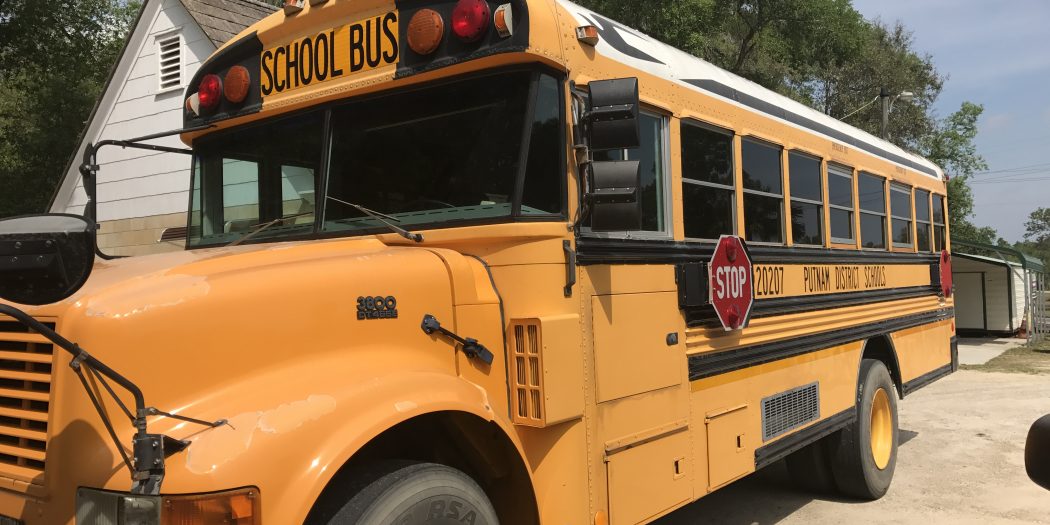 Due to cuts in funding for school buses in Putnam County, students who live within two miles of a school will have to find alternative methods of transportation. The change will go into effect starting in August for the 2017-2018 school year. (Amy Nelson/WUFT News)

The Putnam County School Board voted Tuesday to discontinue funding that provides transportation for students within a 2-mile radius of day cares, middle schools and high schools.

This decision is the result of $1.5 million in budget cuts the school board is aiming to make for the upcoming school year.

The school board wants to make cuts in areas that would not affect teachers or the educational programs within the classroom, said

Kathy Jorgensen, a member of the Putnam County School Board.

“It’s a difficult decision because we understand it will adversely affect some parents,” Jorgensen said. “I apologize to those parents.”

She estimated 900 students within that area will be affected by the cuts.

She said the plan is to eventually extend the cuts to elementary schools as well.

Michael Strauser, a parent and mechanic for the district, had concerns with student safety.

Strauser, who has a daughter in elementary school, falls within the two-mile area of the school. His family is not currently affected by these cuts, but they will be when his daughter begins middle school or if the cuts are extended.

His concerns include bullying by older children, walking in the rain or the dark, kidnapping and sexual predators.

“I just want all the kids to be safe,” Strauser said.

David Buckles, a member of the Putnam county school board, said the board is looking into dangerous areas and will provide transportation for students in those areas.

The board is working to determine other budget cuts, and Buckles said it might put funding back into transportation if it finds other possible areas to cut.

Buckles said the board will continue to research ways to ensure the safety of the students.

Amy Nelson is a reporter for WUFT News. She can be reached at news@wuft.org or 352-392-6397.
@@AmyNelsonUF
Previous Officials, Middle Schoolers Discuss Legal Process For Justice Day
Next Rain Pulls North Central Florida Out Of Severe Drought