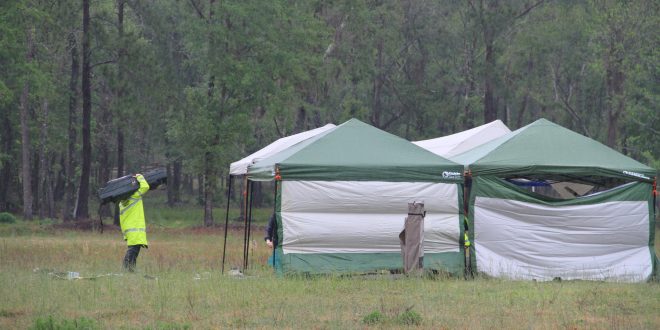 A responder at Tuesday's plane crash off Highway 320 in Micanopy that killed pilot Riley Stevens. Authorities believe weather could be the main factor, but they're still investigating. (Nate Phillips/WUFT News)

The Marion County Sheriff’s Office is investigating the incident alongside the Federal Aviation Administration.

The cause of the crash remains unknown, according to FAA spokesperson Robert Gonzalez. However, a tornado warning was issued at 8:22 a.m. in Marion County, and officials are investigating the role of Tuesday’s weather in the incident.

“We don’t have too many details as far as the cause,” Gonzalez said. “We’re going to look at all the factors that may have caused this crash — weather, mechanical, medical.”

According to Flightaware.com, a flight-tracking database, Stevens’ aircraft dropped 9,000 feet in altitude within several minutes and crashed on the privately owned pasture at 9:12 a.m.

The property owners at 21850 NW 150th Ave. Road reported the crash to authorities, who upon arrival put up tents around the crash, preventing onlookers from seeing the wreckage and protecting the evidence from the weather.

The aircraft, a single-engine Pipistrel VIRUS SW, is a lightweight, homebuilt aircraft that typically seats two passengers.  Stevens’ aircraft was equipped with instrumental navigation, allowing him to fly in weather in which sight alone does not suffice.

According to the aircraft’s online registration, Stevens received certification to fly with instrumental navigation Monday evening.

To receive this certification, both the pilot and his or her aircraft must be registered with the FAA. With an instrumental navigation service, pilots are required to communicate with control towers throughout their flight.

“After a pilot registers their flight plan, it’s purely on the pilot to check the area’s weather conditions,” Willingham said.

As the investigation continues, FAA and the Marion County Sheriff’s Office will collaborate to determine the cause of the incident.

“At this point in time, we can’t contribute the severe weather we had this morning to causing this crash,” said Lauren Lettelier, a sheriff’s office spokesperson. “But obviously, that’s something we are going to be looking in to.”

The Marion County Sheriff’s Office is assisting the Federal Aviation Administration in investigating a small plane crash that left one dead near Williston this morning.

The VIRUS-SW experimental aircraft crashed in a pasture at 21850 SW 150th Avenue Road at 9:12 a.m., according to the FAA. The area was under a tornado warning at the time, although it has not yet been determined if weather was the cause of the crash.

There is one confirmed casualty, but it is unknown how many passengers were on the plane at this time, according to the sheriff’s office.

Plane crash in Micanopy off Highway 320. One confirmed fatality, according to a Marion County Sheriff's Office spokesperson @WUFTNews pic.twitter.com/6padxGeaxj

MCSO and Marion County Fire Rescue are at the scene.

The FAA is investigating the crash.

Contact WUFT News by calling 352-392-6397 or emailing news @wuft.org
Previous Florida Senate Says There Should Be Time To Play In Schools
Next April 5, 2017: Morning News In 90