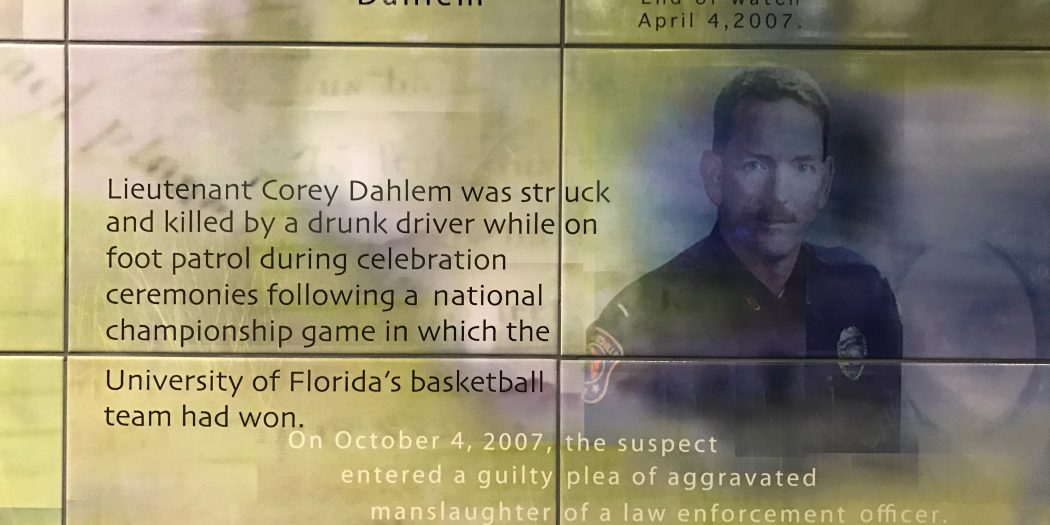 A photo honoring Corey Dahlem on the wall of the GPD's "Hall of Heroes." (Gabriela Rodriguez/ WUFT News)

For Sally Dahlem, Lieutenant Corey Dahlem’s widow, April 4 is usually a day clouded with feelings of intense sadness. But today there is a silver lining.

Gainesville Police Department spokesman Ben Tobias announced the Lieutenant Corey ‘Spoon’ Dahlem Mentorship Award would be given to its first recipient next year to honor the fallen officer’s passion for mentorship.

“Lieutenant Dahlem was a very well-known mentor in this agency,” Tobias said. “We, with the family, wanted to recognize the people in our agency that embody the qualities of Dahlem.”

A drunk driver struck Corey Dahlem on April 4, 2007 while he was on foot patrol. Ten years after his passing, his family is still dealing with the loss. While news of this award brings happiness to Sally Dahlem and her family, a Facebook photo posted by her husband’s killer has been difficult to handle.

After serving approximately eight and a half years in jail for killing Corey Dahlem, Austin Wright was released in May 2016. A week after his release, a photo was posted on his Facebook page showing Wright seated at a table of a restaurant or bar, smiling with a bucket of beers.

Sally Dahlem deemed it extremely  inappropriate, considering the circumstances of her husband’s death.

While Dahlem said she didn’t know whether or not they were his beers or if they belonged to somebody he was with, she said the photo was misleading.

“I didn’t feel they were appropriate to be on someone’s Facebook page who was just out of jail for killing somebody when he was three times his legal limit,” Dahlem said. “I certainly wouldn’t think anybody who had any remorse would allow that to be on their Facebook page.”

In June 2016, Dahlem wrote a letter to Judge Sieg, the judge who served on her husband’s case. The letter included the photo of Wright with the beer along with a short letter.

While the judge on her husband’s case has since retired, Dahlem received a response from Judge Mark Moseley who also felt the photo was offensive. He wrote that the photograph, and what it appeared to say about Wright, dismayed him.

Dahlem knows there is nothing that can be done to further punish Wright because he was not on probation at the time the photo was posted, however, she is still shocked by the photo and hoped the judge on his case would see it as well.

“I thought the judge that sentenced him should know that this is what the person that you gave, what I felt, was not enough time, put on his Facebook page, so maybe he hasn’t learned a lesson,” Dahlem said.

Dahlem said if she could talk to Wright, she would tell him not to hurt anybody else or put anyone through what her and her family went through.

WUFT was unable to reach Austin Wright for comment at time of publication.

GPD’s award in remembrance of Corey Dahlem will be presented to an individual who has provided “valuable advice and support through a significant commitment of time and effort,” according to a GPD statement.

Corey Dahlem’s family, including Sally Dahlem, will choose the winner from among those nominated for the award each year. Winners will be presented annually around April 4.