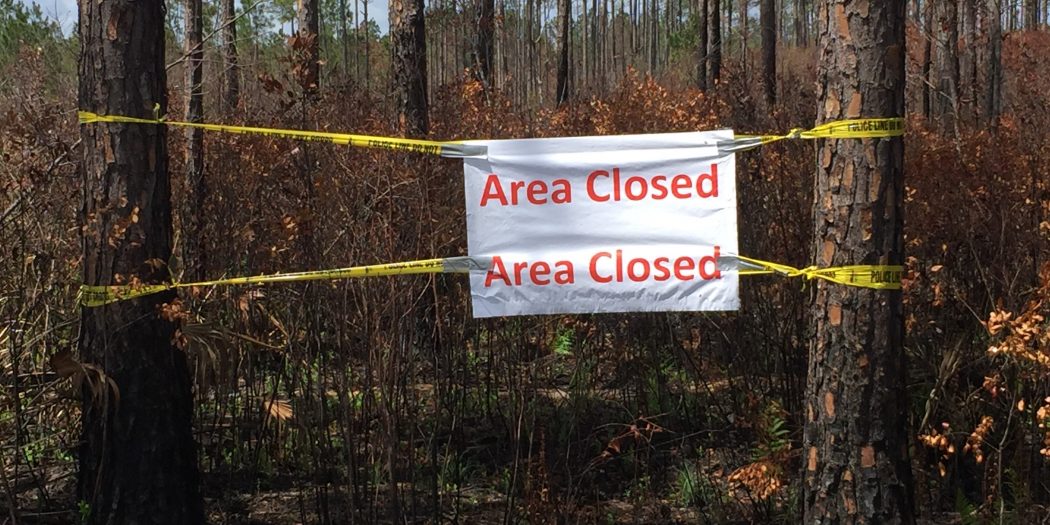 The U.S. Forest Service placed several signs around the park to close off park goers from going near the fire.

When it comes to battling a wildfire, the state tries to handle it on their own.

The fire in Osceola National Forest calls for a different approach.

United States Forest Service workers from across the country are down in Florida helping battle the fire that has been burning the national forest since March 19th. Most of them arrived Thursday afternoon, a little more than a week after the fire was first found.

“Florida is experiencing severe weather conditions,” says Cindy Frenzel, a Virginia-based Fire Prevention Specialist with the U.S. Forest Service. “It puts a national forest in the position where they can order a fire prevention team to come out and help.”

Frenzel was joined by two other out-of-state team members—one from North Carolina and one from Texas.  The out-of-state Fire Prevention team will stay in the area for at least two weeks, and plan to work fourteen days straight for twelve hours a day.

The crew has already been out to the fire site. They have teamed up with U.S. Forest Service members from Florida, working hard to ensure that the fire is heavily watched. So far the crew has 60% of the fire contained.

When the fire was initially reported, the Florida department of the U.S. Forest Service immediately focused on reducing spreading.

“We used aircrafts and bulldozers to put line around the fire,” says David Quisenberry, a U.S. Forest Service Incident Respondent.

The highest flame reached 15 feet on the first day. While the flames have not exceeded that height since the first day, the crew is not taking any chances. More than a half dozen roads leading to the fire have been blocked off.

The fire has only affected a little more than 3,000 acres, but the crew has blocked nearly 4,000 acres to keep park goers safe.

No evacuations had to be made when National Forest of Florida Public Information Officer Janice Gaskins released news of the fire last week. There were other concerns, though.

“Smoke is our biggest hazard when that fire first starts until we get it under control,” she said. “There’s a lot of driving and traffic on the road. We want everyone to be safe and watch out for that.”

Crew members are continuing to monitor the fire and its whereabouts. While a specific date could not be named, officials say the fire should be completely contained in several weeks.

While the crew works to maintain the fire, Cindy Frenzel is hoping that people will be wary of starting a fire with Florida’s current weather conditions.

“We have the remnants of a drought,” she said. “That’s why it’s not a good time to burn.”

Previous Alachua County, Areas Of Florida In Severe Drought
Next A Tale Of Two Gainesvilles