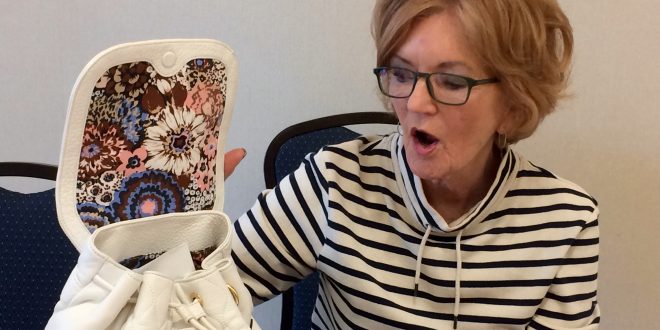 Barbara Bradley Baekgaard, chief creative officer and director of the Vera Bradley luggage and handbag company, displays her "Amy" bag — named after her daughter — prior to speaking Thursday at the University of Florida's Women’s Entrepreneurship Initiative. "I would just say try it," Baekgaard said of those wanting to become successful entrepreneurs. "What have you got to lose?" (Maggie Lorenz/WUFT News)

But she’s got to start somewhere, so she’s studying marketing at the University of Florida and is learning three languages to boot.

And on Thursday, Dickson got another leg up: the second annual Women’s Entrepreneurship Initiative at UF. There, guest speakers from all over the country gave presentations in the school’s Reitz Union on how they broke into their fields and offered advice for young entrepreneurs like Dickson.

“It’s inspirational because one day, I want to have my own business,” she said, “so just hearing them talk helps a lot.”

Dickson was one of almost 400 attendees, who celebrated and shared in the journeys of the speakers. Barbara Bradley Baekgaard, chief creative officer and director of the Vera Bradley luggage and handbag company, gave the keynote.

She co-founded the company 35 years ago after noticing a lack of travel luggage for women.

“In those days … all the luggage was black, colorless,”Baekgaard said prior to her speech.“And we went back to Fort Wayne [Indiana] and started the company the very next day — to the horror of anyone who’s been to business school.”

Baekgaard said she never felt like being a woman held her back in her career.

“There were so many men that want to help you because [they think] you need help,” she said. “And I took advantage of that because I could ask any man any question about business and they would want to help me.

UF public relations student Amparo Bacallao said that Baekgaard is the reason she attended the symposium. Bacallao spotted Baekgaard before the businesswoman took the stage, ran up to her, and the two posed together for a photo.

“I’m really inspired by how she started her company, [which has] become such a big deal,” Bacallao said. “So I really wanted to be part of it and meet her and hear her story more.”

But women weren’t the only ones in attendance.

Nick Cardamone — who works for Gator Hatchery, a business incubator for students in UF’s Warrington College of Business — said he’ll be taking the tips he learned and applying them at his job.

“I’ll be talking to my boss later,” he said. “I’ll give him the rundown on what I’ve heard and some advice, and we’ll try to implement that within the next month.”

Cardamone said he wasn’t deterred by the event’s title.

“I have a girlfriend, and she is really into empowering women,” he said. “And my mom and my sister are both the same way. I feel the same.”

At the close of the symposium, Leah Lytle, founder of the Artsy Abode stores, was presented the Woman Entrepreneur of the Year Award.

A UF grad with a bachelor’s degree in public relations, a master’s in mass communication and an MBA, Lytle started the retail company in 2005. It now includes locations across North Central Florida.

Achieving this type of success, Baekgaard said, is less about circumstance and more about drive, relationships and taking chances.

“Go for it, and bring on your friends and family and a support system and convince them to come along with you,” she said. “I would just say try it. What have you got to lose?”

Maggie is a reporter who can be contacted by calling 352-392-6397 or emailing news@wuft.org.
Previous Florida House OKs Therapy Animals For Children In Court
Next Groups Rally To Support Embattled Prosecutor