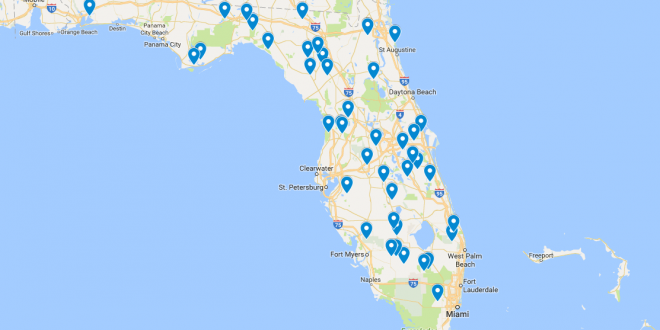 All 49 geocaching locations set by the Florida Fish and Wildlife Conservation Commission. (Photo via Google Maps)

Newberry’s Bell Ridge Longleaf Wildlife and Environmental Area doesn’t usually have a lot of guests, evidenced by the lack of footprints and overgrowth of grass on its trails. But this year may see a significant increase in attendance for a unique reason.

The Florida Fish and Wildlife Conservation Commission (FWC) is celebrating 75 years of wildlife management areas this year — and as a result is hosting a geocaching challenge from March until the end of 2017.

Geocaching’s website describes the activity as a treasure hunting game in which participants use GPS-enabled devices to locate geocaches, containers that vary in size and shape. After participants locate the geocache, they sign and date the logbook and can choose to trade trinkets found inside the container. After starting in 2000, there are now 2 million geocaches worldwide.

The FWC set 49 geocaching locations around Florida for its challenge. The first five people to log all 49 places will receive a book created by the commission as well as other prizes.

Lon Sullivan, a Gainesville resident who has found over 13,000 caches, is one of 2 million geocachers in the world. He said geocaching has helped him discover new places he’d usually never visit.

“I didn’t even know Bell Ridge existed until this,” Sullivan said.

Sullivan — whose screen name on Geocache’s website is Obilon, a twist on the “Star Wars” character Obi-Wan Kenobi — said he enjoys the exploration aspect. Meeting new people, however, is what kept him interested in Geocaching for so long.

“Once I discovered the social side, I just started meeting people, becoming friends with people of all walks, all backgrounds, all interest levels,” he said.

The social benefits inspired Sullivan to encourage friends, like Travis O’Neal, to join him. O’Neal, a 23-year-old University of Florida student, said that although he doesn’t get on the geocache trail often, he enjoys the opportunity.

“I think my brother was the one who first told me about it,” O’Neal said. “We kind of used it more as a way to get everyone together and just kind of go around to different places.”

If you’re not interested in the social or exploration side of geocaching, Sullivan said there is a niche for everyone.

Tom Matthews, a recreation planner with the FWC, said the goal of the event is to get people to visit wildlife management areas.

Between March 13 and 24, about 150 logs have been made among the 49 locations. Matthews said people have logged positive comments overall.

“[People say] things like, ‘Thanks for bringing us to a spot I’ve heard of for years but never took the time to visit,’” he said. “[One person said], ‘As much as Florida that I’ve seen, there’s still so much more I still have to discover. The series of caches is helping me see a lot that I’ve just driven by in the past.'”

The FWC has had an ongoing relationship with geocaching for 12 years, and Matthews said families and participants of all ages are welcome to get involved.

Sullivan said he doesn’t plan to reach all 49 locations, though.

“Some people are devoted enough that they would do that if they have time on their hands to do it,” Sullivan said. “Some of us like a little extra motivation.”

Chase is a reporter for WUFT who can be reached by calling 352-392-6397 or emailing news@wuft.org.
Previous Police: Gainesville Employee Spends $90K With City Credit Card
Next Florida May Spend Millions In Shift To Charter Schools