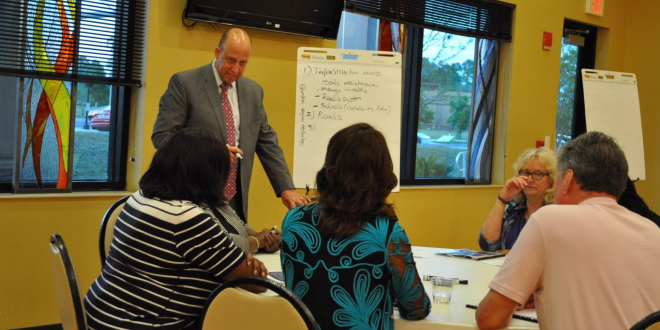 Attendees of the Gainesville Area Chamber of Commerce's Putting Children First Infrastructure Investment Initiative meeting on Wednesday engage in breakout sessions to discuss what they think are the most important infrastructure needs are. The meeting turned its focus on the outdated first-responder radio system in the county, which officials say hinders communication among police, firefighters and other responders. (Ashleigh Braun/WUFT News)

With benefitting children at its core, the effort seeks to find where infrastructure improvements are needed most in four different areas: public schools, roads, public safety, and parks and recreation.

Since the launch, it has researched those areas, and at a public meeting on Wednesday, the Chamber and other county leaders unveiled some recommendations regarding public safety specifically.

The Trunked Radio System is 17 years old and extremely outdated, and replacement parts are no longer available for it, Darnell said, adding that responders have resorted to buying old parts off eBay.

Additionally, many of the current radios don’t work in rural areas where radio towers are sparse, or communicating in new buildings is tough, too, because of their thick concrete walls.

Examples mentioned Wednesday included The Standard, the towering apartment complex being built at the corner of West University Avenue and 13th Street, and the University of Florida’s Newell Hall, which is in the finishing stages of construction.

Once Newell opens, UF plans to station a police officer on the building’s first floor, but if other responders need to communicate with her or him, they’ll have a tough time because of the thick walls.

Because i3 has children at its core, Darnell specifically mentioned the issue of communicating inside rural schools.

At the meeting, audio of a real fight at an Alachua County school was played. In the audio, a school resource officer can be heard calling for backup, but other police didn’t immediately respond because they never received the call.

“This is a vital issue in our community,” Darnell said. “This a reality that our public safety officials face every day.”

Huckstep compared the power of the current radios to a 3-watt lightbulb.

The estimated upgrade cost for the system: between $10 million and $20 million.

About 35 people — mostly law enforcement and Chamber members but also some citizens — came to Wednesday’s meeting, which served as an opportunity for attendees to learn more about i3 and its targeted efforts.

Chamber member and i3 Steering Committee Chair Brian Scarborough, of Scarborough Insurance, said he hopes this is the first of a few conversations in which people will start to process the idea that more funding is necessary.

Specifically, he said it’s important for citizens to understand that voting in favor of referendums that increase or add taxes are important in making needed infrastructure changes.

“This is a true deep dive into defining the infrastructure needs of our community, including in that what the present funding is like and where we might be able to find other funding to address the needs since present funding is not sufficient,” Scarborough said.

Future meetings are expected and will focus on the other three i3 sectors: public schools, roads, and parks and recreation. But times and dates haven’t yet been set for them.

“The next one we may have Sandy Hollinger, who is the interim superintendent of [Alachua County] schools and bring their facilities person to do their 30 minutes on the numbers,” Scarborough said.

Scarborough said he hopes people will educate themselves about the different infrastructure issues in the county and take that knowledge with them as they make informed decisions.

“If we don’t do anything,” he said, “then nothing’s going to change.”

Ashleigh Braun is a reporter for WUFT News and can be reached at 954 551 5626 or abraun215@ufl.edu.
@@ashleighbraun2
Previous Florida Senate Approves Bill On Public-Records Abuses
Next March 30, 2017: Afternoon News In 90