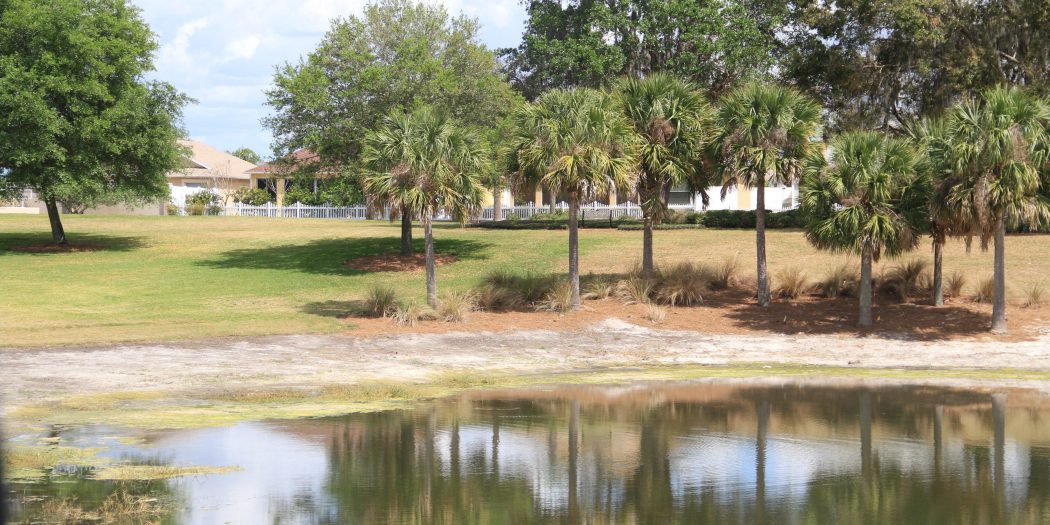 One of the ponds near district one of The Villages sits at an abnormally low water level. Residents say they’ve noticed a decrease in pond water levels following the dry winter. (Meagan Meredith/WUFT News)

The Villages Cut Down Water Use Following Water Shortage Order

Residents in The Villages are being urged to conserve water following a water shortage order implemented earlier this month.

The Southwest Florida Water Management District issued a phase one water shortage on March 10 to parts of Lake, Marion and Sumter counties. The restrictions limit lawn watering to twice a week and prohibit wasteful water use.

Administrative operations manager Diane Tucker said The Villages is taking the water shortage order very seriously since one hasn’t been issued since December 2010.

“Phase one is just a warning, but it could go to phase two,” Tucker said.

Tucker said although residents are allowed to water their lawns twice a week, there is no need to do so if the grass is healthy.

“We encourage — especially this time of year, the dormant time — that they only irrigate when it’s needed,” Tucker said. “Wait until [the grass] shows signs of stress.”

The shortage results from a rainfall deficit. In the past 90 days, the area around The Villages is about 4 inches of rainfall below normal, according to The Southeast Regional Climate Center.

But the community isn’t alone — the nearby city of Leesburg is 9.09 inches of rainfall under what the city typically receives between October and March, according to data from the National Weather Service. Due to a dry winter, much of the state is experiencing drought or near-drought conditions, said Amanda Holly, senior forecaster at the UF Weather Center.

The Villages are not yet in a drought, but are seeing abnormally dry conditions, according to the United States Drought Monitor.

Villages Resident Mariann Dewes said she wasn’t surprised when she learned about the water shortage order.

“You can see that the ponds just don’t have the amount of water they used to have,” Dewes said.

It’s not just an issue of residential water use. In a community with 36 executive golf courses and 12 country club courses, The Villages has a lot of grass to maintain.

Since the shortage was issued, the community cut back between 30 and 45 percent of the amount of water normally used, which is a significant reduction, said Sam Wartinbee, director of The Villages’ District Property Management Department.

“We water when we need to water, not just two days a week because we can,” Wartinbee said.

Additionally, irrigation systems are checked regularly to ensure there aren’t any issues that might result in excessive water loss.

While the ponds in the area are noticeably low and portions of the golf courses are browning, Wartinbee said the results from water reductions haven’t been too bad.

“We’re just hoping to get some rainfall soon,” Wartinbee said.

He just might get his wish. According to the Climate Prediction Center, the April forecast foresees normal amounts of precipitation, but the water shortage order is in effect until July 30.

Meagan Meredith is a reporter for WUFT News. You can reach her by email at meagmeredith@ufl.edu or by phone at 469-734-8727.
@@MeaganMeredith
Previous Gators Softball Coach Tim Walton Involved In Confrontation With Auburn Player After Loss, Releases Statement
Next Afternoon News In 90

For Poor In America, Sanitary Sewage Disposal Can Be A Challenge

Poe Springs Reopen As Other Parks Are Slowly Allowing Visitors

But the utility could see initial savings of about $4 million.