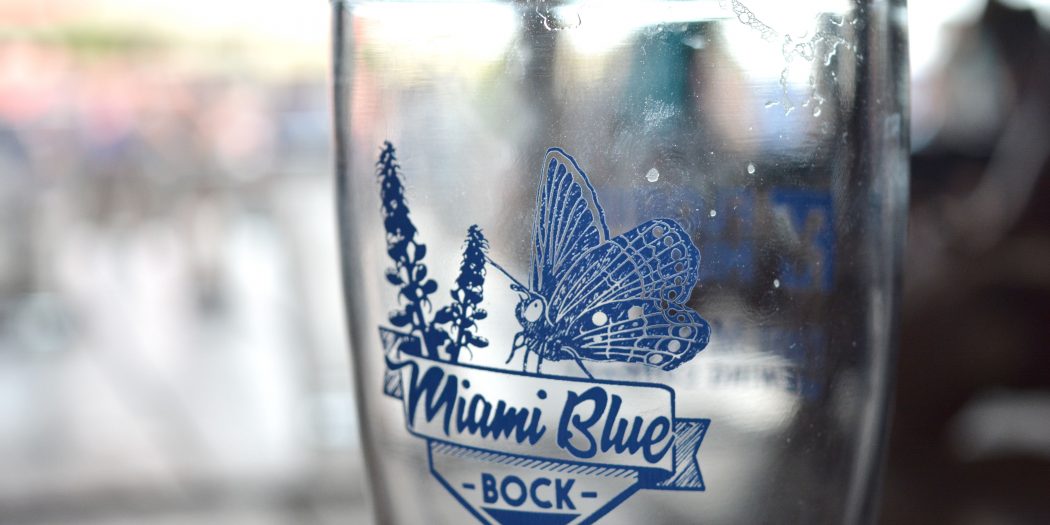 The Florida Museum of Natural History sold pilsner glasses with the Miami Blue Bock logo at a launch party Friday. All the proceeds from the night went to conservation efforts for the Miami blue butterfly. (Savanna Kearney/ WUFT News)

Brewery Partners With Museum to Save Butterflies

At First Magnitude, buying beer can save a butterfly.

First Magnitude Brewing Company is partnering with the Florida Museum of Natural History to sell a limited-edition beer to raise money for the conservation of Miami blue butterflies. The beer is part of what the FMNH is hoping will become a series of butterfly conservation fundraisers.

First Magnitude held a launch party Friday to celebrate the fundraiser, where they sold T-shirts, Pilsner glasses, and the limited-edition beer in pints, on tap and in six-packs. If customers donated $10 or more at the door, they received wristbands that provided discounts on the products.

In addition to the beer and merchandise sales, FMNH has developed an augmented reality technology related to the beer can label. Customers were able to download a free app that provides a 3-D animated projection of the Miami blue butterfly along with in-depth information on its conservation.

“It’s really one of the first sort of unique uses of augmented reality with beer, and arguably, one of the first for educational purposes,” said Jaret Daniels, director of the McGuire Center for Lepidoptera and Biodiversity at the museum.

All the money from the merchandise and beer sold at the Friday launch party and a portion of the proceeds from the limited-edition beer will go to the conservation of the butterflies.

According to Daniels, the Miami blue butterfly was relatively common around the southern coast of Florida 30 years ago, but has catastrophically declined.

“It’s one of the most endangered insects in the nation,” Daniels said.

With the money raised from the beer, called the Miami Blue Bock, the Florida Museum of Natural History will be able to study the Miami blue butterfly and increase their numbers, Daniels said.

“It’s a nice model for a local business helping to support conservation in Florida,” he said. “It’s a good way of engaging people and educating them about conservation and some of the natural resources we have in Florida.”

First Magnitude produced 73 cans of the limited-edition beer and about 7 barrels of draft, close to 217 gallons. It will be sold in six-packs and on draft around multiple Gainesville venues until it runs out.

“The helles bock is a beer to usher in the spring season,” McClung said.  “So, it’s light in color, medium body, rich and malty flavored. It’s strong. It’s 7.1 percent, but it’s really smooth.”

This isn’t the first time First Magnitude has partnered with organizations to raise money for environmental and wildlife causes. The Florida Museum of Natural History initially partnered with First Magnitude in 2016 to produce a limited-edition beer to raise money for the Schaus swallowtail butterfly. They raised more than $2,000. But the Miami Blue Bock is the first conservation partnership beer to be sold in canned six-packs.

The brewery has also partnered with the Conservation Initiative for the Asian Elephant for the past two years to host a celebration for World Elephant Day. According to Ron Chandler, president and co-founder of CIFAE, the event consisted of discounted beers, merchandise, live bands, information panels and the premiere of  the Elephant Bike.

“First Magnitude is such a staple in the community. All kinds of people enjoy going there. They obviously have great partnerships with other organizations,” she said.

The brewery hosts events to benefit environmental efforts in addition to wildlife conservation. According to Christine Denny, co-owner of First Magnitude with her husband John Denny and partners Meg and Wells The Losen, First Magnitude partners with multiple local organizations, including We Are Neutral, the Springs Eternal Project and Current Problems, which benefit clean-ups for springs, creeks and rivers. The brewery also hosts the annual First Magnitude 7.2k Springs Run to raise money for education about Florida springs.

“When we opened the space, we really wanted it to be a community place and a place where people could come and raise awareness about different events and different really important issues to our community and the environment,” Denny said.

In fact, First Magnitude was named as such because of the springs in Florida. Springs that pump out more water than any other springs are called first magnitude springs, of which there are a high concentration in Florida.

“We wanted to name ourselves after the springs to bring awareness to our local water resources, our waterways and to try to get people engaged in kind of a different way than the norm with learning about the environment around them,” Denny said.

Savanna Kearney is a reporter for WUFT News. She can be reached on Twitter @savannakearney.
Previous Mar. 27, 2017: Afternoon News in 90:
Next Hurricane Names Matthew and Otto Retired 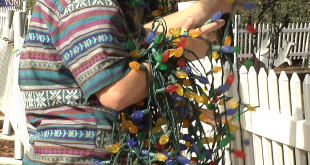