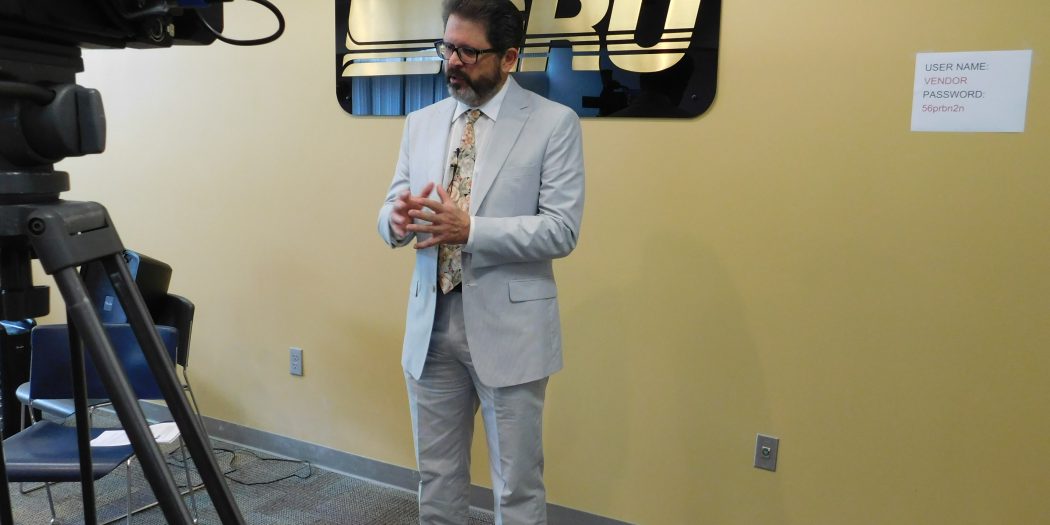 GRU General Manager Edward Bielarski has been in the process of working with GREC Chief Executive Officer James Gordon for about five months on terms that would benefit both sides if GRU were to buy GREC for the agreed amount of $750 million.

GRU is known for having some of the highest utility rates in Florida, and Bielarski said he hopes to lower the electric rates for GRU customers by 8 to 10 percent. This could be possible if GRU no longer has to pay the GREC plant itself, or if it no longer needs to pay for the time GREC is under maintenance and not producing energy, according to a news release from GRU.

The City Commission and the Utility Advisory Board met to hear Bielarski’s five-year plan for GRU and his update on the plan to buy GREC.

Bielarski and Gordon signed a memorandum of understanding on March 22 and it is now up for vote by the city commission. Bielarski said it felt “so good, so good, so good” to finally reach an agreement with GREC.

The agreement means that GRU can save $2.1 billion, which would have been spent during the remainder of GRU and GREC’s 30-year power purchase agreement (PPA). Now GRU can give the money back to their customers through lower prices, Bielarski said.

However, not everyone is on board with the plan for GRU to save money by terminating the PPA.

At a joint meeting on Thursday, some Gainesville residents said they are not only unsure of how the GREC purchase will reduce utility costs, but also think the community should have more of a say in the decision.

“My two primary objections at this point are the speed by which they wish to proceed and the purchase price that’s being discussed of $750 million,” Gainesville resident Paula Stahmer said. “The biomass plant isn’t worth that much money and I think that they managed to price it that high through a series of misrepresentations throughout the years that we’ve been under that contract, the PPA, and I think that it’s inappropriate for the city or GRU to respect that number.”

Stahmer said she has been fighting against GRU’s purchase of GREC prior to 2009, adding that Biomass is far more polluting than coal and GRU customers weren’t getting a state-of-the-art facility. She said she also worries that GREC will take more money to maintain than what it’s worth, especially after purchasing it at such a high price.

Other Gainesville residents were upset by the manner in which the GREC plans were presented and spoke out at the beginning of the meeting.

“Mr. Bielarski was saying that each day we wait on this decision is going to cost us, but it’s already cost us,” said Adelle Francie, a GRU customer.

Bielarski said he recognizes utility providers and the community share a unique relationship, so he welcomes any input on the GREC purchase.

“People have a voice in what goes on, and, in the past, the power purchase agreement was signed and executed, and the plant was built, and people felt disenfranchised,” he said. “I think the people that are against this are the ones that just don’t want to have that happen again.”

Despite the uncertainty by some Gainesville residents and members of the City Commission, Bielarski said he is still optimistic that the city will vote to allow the purchase by the April 21 deadline stated in the memorandum.

“I’m incredibly hopeful,” Bielarski said. “I think this is the beginning. It’s a little bit of a boxing match and we’re going to go back and forth, but I think everyone’s heart is in it and I ask for the community’s support.”

Cassandra Rosevelt is a reporter for WuftNews and can be reached at 856-25-7056 or caseyerin1994@ufl.edu.
@@CassandraErin94
Previous Mar. 24, 2017: Afternoon News In 90
Next Citrus County Expanding Central Landfill To Accommodate Closures