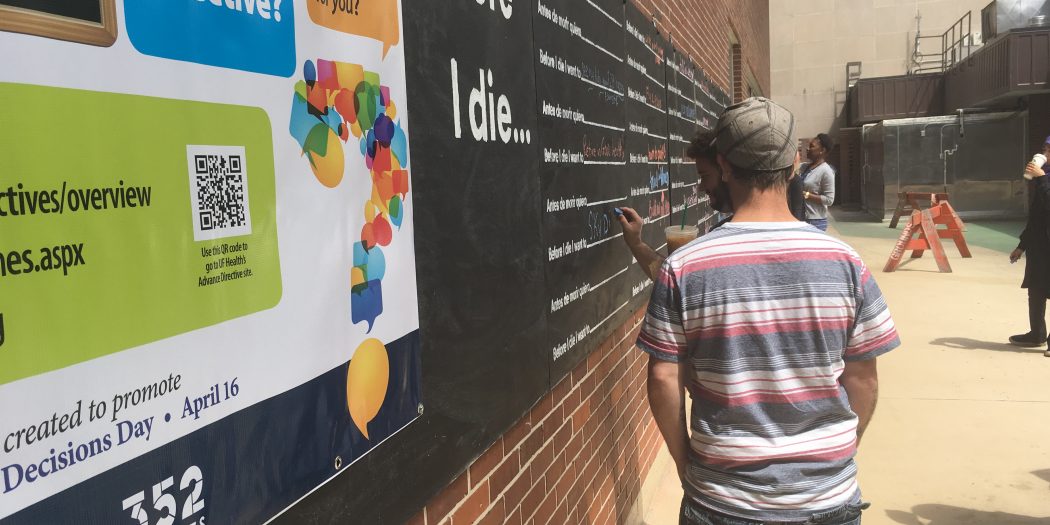 “Before I Die” Walls In Gainesville Promote Importance Of Advance Directives

The installation of “Before I Die” walls throughout the Gainesville community by UF Health encourages people to start a conversation about death.

Wendy Resnick, senior director of finance at UF Health Shands Financial Services, said the goal of the project is to motivate participants to fill out advance directives. Advance directives include plans like a living will or health care surrogate forms and can make the process of death easier for not only the individual but also the family.

“The goal of the project is to encourage people to have those very difficult conversations about death and dying and their personal wishes,” Resnick said.

“Even as they were putting the wall up, people were writing on it,” she said of the wall at Sun Terrace.

“It’s no news to any of us that there’s 100 percent mortality in this world,” Clement said. “If something were to happen to any of us, regardless of age, it’s important to have advance directives in place.”

Clement said in addition to advance directives, the project helps people consider what they want to do or accomplish in their lives. He said his time planning and preparing for the project also left him considering what he would write.

Chad Petty, an equipment tech at UF Health Shands Hospital, wrote his goal on the wall at Sun Terrace the afternoon it was installed.

“I’ve always wanted to go skydiving,” Petty said. “It’s something I’d want to do before I die.”

Petty said the walls encourage people to look into the importance of advance directives and that while uncomfortable, talking about death is a helpful experience for people and their families.

“It’s scary, but I think it’s healthy because it relates to another person how you feel about it,” he said. “In a weird way, it’s healthy.”

Resnick said the chalk writing on the walls will be erased daily to allow other people to write on them. She said while the walls will only be up for a short period of time, the project will possibly take place next year as well.

Clement said he hopes the project will inspire people to be unafraid when talking about death.