Some backers of a renewable-energy tax break that voters approved in August contend a House proposal to carry out the constitutional amendment could slow the growth of solar energy in Florida.

Also, several members of the House Energy & Utilities Subcommittee, which unanimously supported the proposal this week, expressed reservations that regulations outlined in the bill (HB 1351) may be too “overwhelming” for some in the solar installation industry.

But House Majority Leader Ray Rodrigues, an Estero Republican who is sponsoring the bill and was a co-sponsor of the constitutional amendment, defended the legislation. He said solar-industry proponents knew he was working to enact rules based on laws recently established in Arizona that include financial disclosure requirements and penalties to protect consumers.

“I made no apologies for putting in language in the bill to protect Florida consumers,” Rodrigues said. “I want to see solar grow in Florida. But the last thing we need, the last thing we need, are headlines ’emerging solar industry’ and tales of woe in the wake as bad actors come to this state and take advantage of this emerging field and enrich themselves and harm our consumers.”

But other supporters of the constitutional amendment told lawmakers that the proposal may discourage people from engaging in the business of rooftop solar.

“We think that some of the issues that, in good faith Rep. Rodrigues found in the Arizona legislation, go way too far and really at the end of the day are going to be confusing to customers and potentially provide obstacles for consumers,” said Jeff Sharkey, a lobbyist for Tesla, Solar City and the Energy Freedom Coalition of America.

In August, nearly 73 percent of voters supported the ballot proposal, known as Amendment 4, that in part extended a residential renewable-energy tax break to commercial and industrial properties.

Under the proposal, the tax exemptions in Amendment 4 would begin in 2018 and last for 20 years. Voters approved a similar exemption for residential property owners in 2008, with the measure taking effect in 2014.

Amendment 4 also has an element to help residential property owners, as it would exempt all renewable-energy equipment from state tangible personal property taxes.

Others expressed confusion with the language of the bill that is not included a Senate version (SB 90), which has cleared two of its four assigned committee appearances.

Barry Jacobson, president of Gainesville-based Solar Impact Inc., said the House proposal appears to establish a “new tax.” Patrick Altier, president of the Florida Solar Energy Industries Association, said items in the bill are “requiring us to be fortune tellers or bankers.”

“It really looks like they’re really looking for us to put on a lot of different hats and to become experts at things that we’re not licensed or experts at,” Altier said.

Rep. Eric Eisnaugle. R-Orlando, said critics of the proposal may be misinterpreting the bill’s language. Still, he hopes to see some “comfort language” added as the bill advances to clarify the financial provisions and responsibilities, which may be “overwhelming” to small business owners.

“If we’re dealing with the large utilities, they have the resources, right, to go through and have their CPAs and lawyers figure all this out, but the small business (owner) just doesn’t,” Eisnaugle said. “Barring some evidence in Florida of a rampant problem with our solar installers committing fraud and things, I just think that probably by the time this hits the floor that this will be drastically streamlined.”

Jim Turner is a reporter for the News Service of Florida, a wire service to which WUFT News subscribes.
Previous Florida Lawmakers Ponder Direction On School Testing
Next ‘Liquor Wall’ Closer To Getting Torn Down 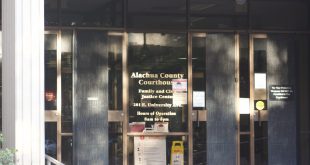 Board members will determine in their Thursday hearing whether to take the judge’s recommendation to terminate Hickman.