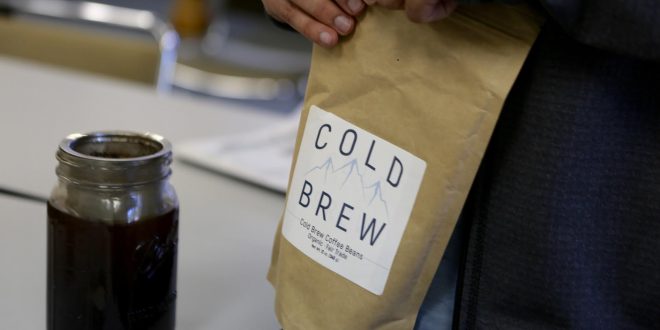 On a recent trip to Colombia, University of Florida marketing student Adam Rioux met with coffee farmers growing beans for his new company, Cold Mountain Brew, to figure out best practices. Cold Mountain has had 50-plus orders since its first on Feb. 6. (Photo courtesy Adam Rioux)

From Colombia To Florida: Cold-Brew Coffee Company Launches In Gainesville

On Dec. 19, Adam Rioux and his brother John came up with the idea for a cold-brew coffee company.

Just under two months later, they were ready with a website, a supplier and packaging — and thus, Cold Mountain Brew was born.

Adam Rioux, a 21-year-old University of Florida marketing student, traveled in late December to Colombia to meet the farmers who’d be making his coffee.

What Rioux found were natives “living a very secluded life” in the mountains, he said. The indigenous farmers — who live near Cali, Colombia, close to the country’s west coast — are part of a coffee cooperative called Fondo Paez, which sets its wages so they do not fluctuate with the market.

It takes about two years for the coffee beans to mature as they turn from green to red to purple. For the best-tasting coffee, farmers pick the beans as soon as they turn a deep red. They then remove the shells and de-pulp the beans before transporting them to a processing plant to check for defects.

To get to the farmers and experience the bean-growing process, Rioux hiked about an hour along serpentine roads not traversable by car to a secluded farm.

One of the reasons Rioux decided to meet the farmers was to see what the biggest issues were to try to help with them.

The farmers’ cooperative determines how they can use their pay in an attempt to prevent them from buying drugs, but Rioux said he wants them to have more freedom in choosing.

“We want to start bringing back money to farmers,” he said.

Cold Mountain Brew receives its beans from Sweetwater Organic Coffee, a liaison between Rioux’s company and the cooperative. So it will likely be difficult for Rioux’s start-up to gain traction or have a say with bigger companies running the show, he said.

When he gets the beans from Sweetwater, Rioux packages it in a bag with a label he made.

Cold Mountain is selling only through its website and has had 50-plus orders since its first on Feb. 6. Often, Rioux hand-delivers the boxes, which include two bags of beans and, with the first order, a Mason jar, wooden lid and filter to steep the beans — a process that can take 12 to 24 hours.

The personal deliveries save on shipping — which is offered for free by Cold Mountain with a subscription to the monthly bags — and provides a personal touch, he said.

One customer, chiropractor Dr. Jude Alcide, said he wasn’t a coffee drinker before, but a bag of Cold Mountain Brew and a Mason jar now sit on display in his suite for Alcide Chriopractic in the Seagle Building in downtown Gainesville. In a mini fridge in the office, the chiropractor keeps a second batch of even colder brew that has already been steeped for his patients to try.

“Hot-brewed coffee left a bad taste in my mouth, and I hated it. So this cold brew kind of just fell into my lap,” he said, noting how he met Rioux through his marketing intern.

Besides liking the taste, Alcide said there are health benefits, too, to drinking cold-brew coffee. For one, it is less acidic than hot-brewed.

According to a 2005 paper in the Journal of Agricultural and Food Chemistry, “longer periods of roasting resulted in a loss of total” chlorogenic acids, which irritates the stomach lining and could cause heartburn, acid reflux and eventually ulcers and diabetes.

Because cold brew is roasted for a longer period and even up to a day, the chlorogenic acids dissipate. There are also lower levels of the acid in Arabica coffee, the kind that Rioux’s company sells, the researchers concluded.

Cold Mountain’s business is growing slowly by word of mouth, Rioux said, but he aims to increase it through marketing campaigns on social media and within fraternities and sororities at UF.

To do so, Rioux recently visited sorority houses at the university. He said sorority members often drink coffee from Starbucks, but that is more expensive per cup than his product.

Sammie DeMaria, a health science student at the university, was at her sorority’s house when Rioux came to give members a presentation and samples.

The coffee drinker was intrigued by Rioux’s story of using fair-trade practices and visiting the farmers in Colombia.

“I’m into health … so I definitely gravitate towards more organic and natural products,” she said. “That’s one of the reasons I was attracted to the brand.”

Such features are what Rioux said he uses to sell his product.

“My focus right now is pushing out the organic message and pushing out the farmer message,” he said, “because to me, it’s showing people where the coffee really comes from.”

Emma Green is a reporter for WUFT News and can be reached at 305-965-0447 or greenemma@ufl.edu.
@twitter.com/emmaginable_
Previous After Dogs Kill Ponies, Fundraiser Launched For Columbia County Ranch
Next March 22, 2017: Morning News in 90