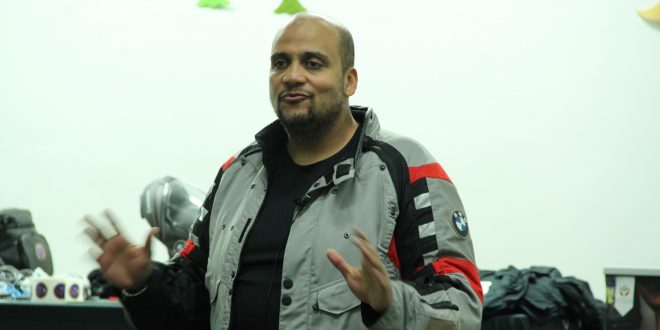 Ahmed Elkhaldy, who plans to ride his motorcycle to 48 states in support of Syrian orphans, speaks to members of the Hoda Center in Gainesville Monday night. (Photo courtesy Emily Mavrakis)

Ahmed Elkhaldy is riding across the country to raise money for Syrian orphans and spread awareness of Islam.

The motorcyclist made a stop at the Hoda Center on Southwest 13th Street in Gainesville on Monday to discuss his campaign and show the critically acclaimed film “The White Helmets,” a documentary about volunteers in war-torn Syria.

Although Elkhaldy began his motorcycle trip in Iowa, where he lives with his family, his “Ride for Orphans” fundraiser officially began in Dallas on Jan. 30. Elkhaldy said he originally planned on traveling to 48 states in 48 days, but he realized he could raise more money if he went to as many mosques, churches, synagogues, community centers, YMCAs, Boy Scouts of America meetings and motorcycle clubs as possible for all of 2017.

During the visits, Elkhaldy discusses his religion, something he said many Americans misunderstand.

“If you meet with 20 or 30 members of a motorcycle club, you’re meeting with the American fabric, you are meeting with your nextdoor neighbors,” Elkhaldy said. “Many of them have never heard anything about Islam, so the first object of my Ride for Orphans is to change the narrative and let America really get close to what Islam is all about.”

This time, he plans on reaching every state besides Hawaii and Alaska. So far, he has been to Texas, Louisiana, Mississippi, Alabama and Florida and has raised about $250,000 for Mercy Without Limits, a Kansas-based nonprofit that provides Syrian orphans with education, food and clothing.

Syria has about 800,000 orphans in need of help and financial sponsorship, Elkhaldy said.

“We feel that each of these orphans has the potential to be a world leader,” he said. “They are so full of life.”

Elkhaldy said he was brought to tears earlier this month by a photo of some Syrian orphans staying in Gaziantep, Turkey. They held up messages reading “Ride for Orphans” and “Thank you Ahmed Elkhaldy.”

“I would feel wrong not to help them,” he said.

Tanweer Syed, vice president of Students Organize For Syria at the University of Florida, said that although he wasn’t able to visit the Hoda Center Monday night, he heard about Elkhaldy’s motorcycle trip through Facebook and friends on campus.

The 17-year-old freshman said his group’s primary mission is to spread awareness of the Syrian people’s struggle for human rights and freedom, but it’s sometimes difficult to raise money on a college campus with hundreds of other competing organizations.

“As college students, we aren’t in the best position to raise money and don’t necessarily have the means to give,” Syed said.

But in recent months, Students Organize For Syria has raised about $7,000 through various events and fundraisers, Syed said. Just last week, for example, the group held its own showing of “The White Helmets,” which won an Academy Award for best short-subject documentary.

“The film was obviously great,” Syed said. “I shed a few tears. I looked around and almost everyone had cried a little bit.”

Syed said he thinks the motorcycle trip is a perfect way to fundraise and wouldn’t be surprised if Elkhaldy has collected more than $1 million by his 48th state.

“Pardon my language, but it’s kind of badass,” Syed said. “Him being on a motorcycle alone traveling across the country brings so much attention to his cause.”