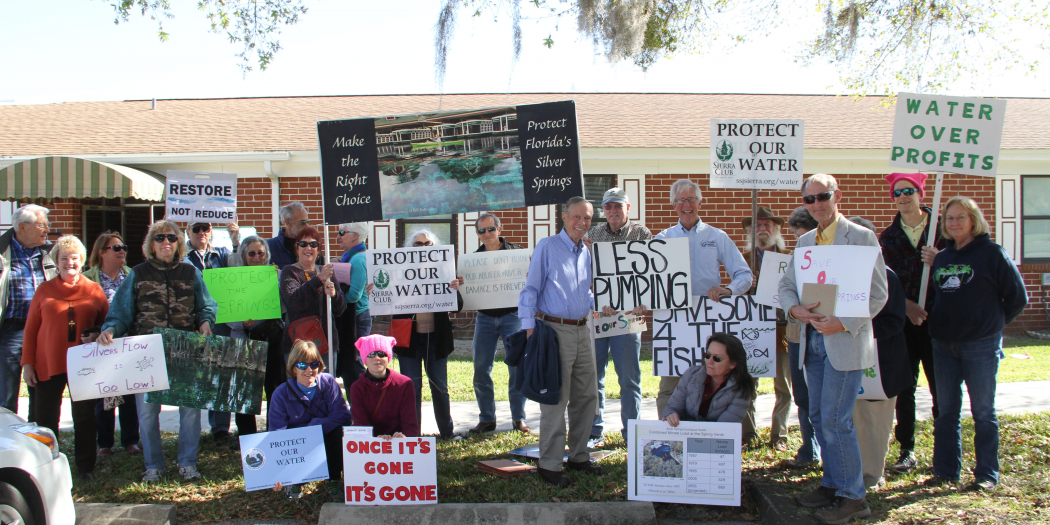 Residents of Marion County are unhappy with the St. John’s River Water Management District, and they’re not being quiet about it.

The Marion County Commission hosted a public workshop last week to introduce a proposed set of regulations for Silver Springs. During the workshop, attendees lashed out at members of the district, calling the seminar “embarrassing” and “an absolute joke.”

The new regulations, which commissioners hope to have approved by April 11, will allow for an additional 10 million gallons of water to be withdrawn from the springs daily, a measure that protesters said would significantly harm an already struggling ecosystem.

Silver Springs, the largest artesian spring in the world and one of Florida’s popular tourist attractions, currently has 185 million gallons of water extracted on a daily basis, resulting in reduced wildlife populations, diminished water clarity and an increase in toxic algae, according to the Florida Springs Institute.

The institute has also determined that average water flow in Silver Springs has declined by 36 percent since the 1970s. Anything higher than a flow reduction of six percent is considered “significantly harmful,” according to the institute.

“It’s ludicrous,” said the Florida Springs Institute founder Robert Knight. “We’re so far beyond harm that it’s not even funny.”

Knight, who has more than 30 years of experience as an aquatic ecologist in Florida, said that increasing the amount of water extracted from the springs would make the situation drastically worse. He instead called for the water management district to reevaluate its proposed regulations and implement a “recovery plan” for the springs’ declining flow.

“Nobody wants Silver Springs to be harmed,” Knight said. “And yet, we are harming it on our watch with this water management district, with this state government, and it needs to stop.”

Officials from the water management district said they are open to reforming their proposal and are taking the community’s concerns seriously.

Mike Register, director of St. John’s Division of Water Supply Planning and Assessment, said the district still plans to pass the regulations, but they can be adjusted after their enactment if needed.

“We certainly are listening with open minds to all of the points that they’re making,” Register said, regarding community members’ opposition to the proposal. “We will look into those questions that they’re raising to make sure that we have accounted for all of that.”

Register said the current decline of flow levels at Silver Springs is due to a decrease in rainfall over the past 30 years, and it’s natural for the springs’ water levels to fluctuate due to numerous environmental factors.

Part of the district’s suggested regulations include implementing a minimum flow level that the springs would be required to stay above at all times. This would minimize consumptive use permitting of the springs’ water in order keep its flow levels from declining significantly, according to Register.

However, many citizens in Marion County agree with Knight that Silver Springs flow levels have already declined to a dangerously low point and are trying to raise awareness of this issue.

An hour before the water management district presented its proposal on Thursday, about 30 protesters gathered outside the Marion County Commission Auditorium and held up signs pleading for Silver Springs to be protected from further damage.

MacKay emphasized the importance of Silver Springs and its impact on the state economy, stating it was a major destination for tourists during his time in office.

“This is one of the premiere locations in Florida, and the problems we’ve got here are symptomatic of the whole state,” he said. “If we can’t save this, I think we’re really in trouble.”

Dylan is a reporter who can be contacted by calling 954-895-2738 or emailing ddixon@ufl.edu.
@@dylanrdixon
Previous Archer Road Motorcycle Crash Leaves Rider In Critical Condition
Next Grammy Winner Michael Lewin Plays Tonight At UF School Of Music