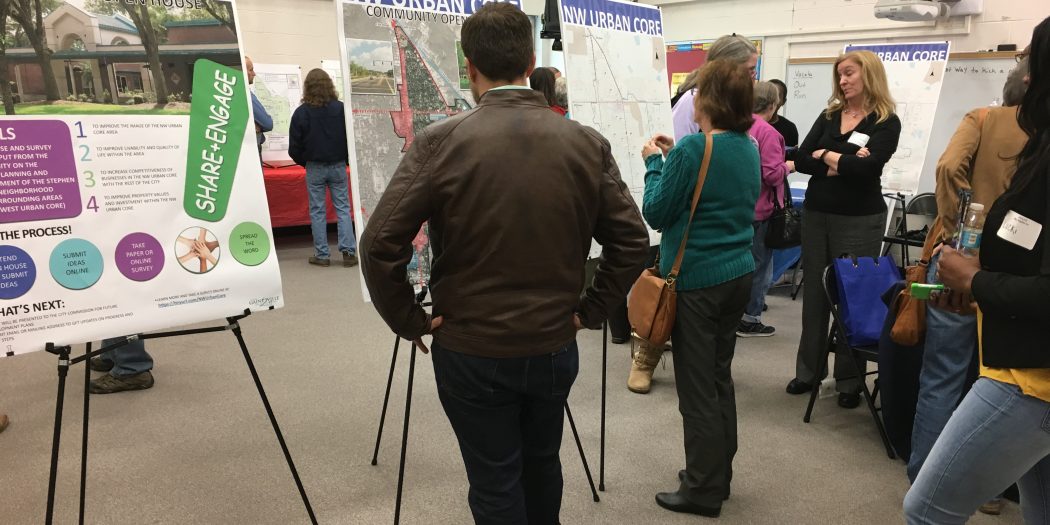 Residents were presented with future plans for the the Northwest Urban Core neighborhood. (Karla Arboleda/WUFT News)

Residents voiced their opinions for future plans in the Northwest Urban Core neighborhood in an open forum Wednesday at Stephen Foster Elementary.

In recent years, the Stephen Foster neighborhood has been under scrutiny for the dioxins in the soil, inciting an ongoing and extensive remediation process. However, residents have concerns that span the decades they have lived there.

At Wednesday’s open forum, representatives from Gainesville Regional Utilities, Parks and Recreation and more spoke with attendants about the possibilities for the future of the neighborhood. Surveys were available in-person and online.

Rick Hutton, supervising engineer for GRU water department, said that while the remediation process for the Cabot-Koppers Superfund Site has taken a long time, it will still be a few more years until the cleanup of hazardous materials is complete.

“We’re not under some critical threat, but it is very important that both sites get remediated so it doesn’t become a potential impact to our water supply,” Hutton said. “We want to make sure we can say that 10, 20 and 50 years down the line.”

The online survey has received 33 responses as of Wednesday, which answer some of the city’s questions including “What community amenities do you think need the most attention right now?” to which 66.7 percent of people responded “redevelopment/addressing blight.”

The Northwest Urban Core, which stretches from Gainesville High School up to the northernmost part of 13th Street and to the Cabot-Koppers Superfund Site, also has issues voiced by residents regarding speeding and lack of bike lanes in high traffic areas.

Sharon Woodruff, a resident of the Stephen Foster neighborhood since 1979, loves her neighborhood; she just wants it to continue to feel like home.

Raising a family who would bike everywhere, Woodruff knows the area would benefit from the addition of bike lanes. Years ago, she used to ride her bike to University of Florida while her kids would head to P.K. Yonge Developmental Research School.

“We need both bike paths because we have loads of cyclists in the neighborhood,” Woodruff said. “I’d like to see the city make a 100 percent commitment to family-owned homes in this neighborhood.”