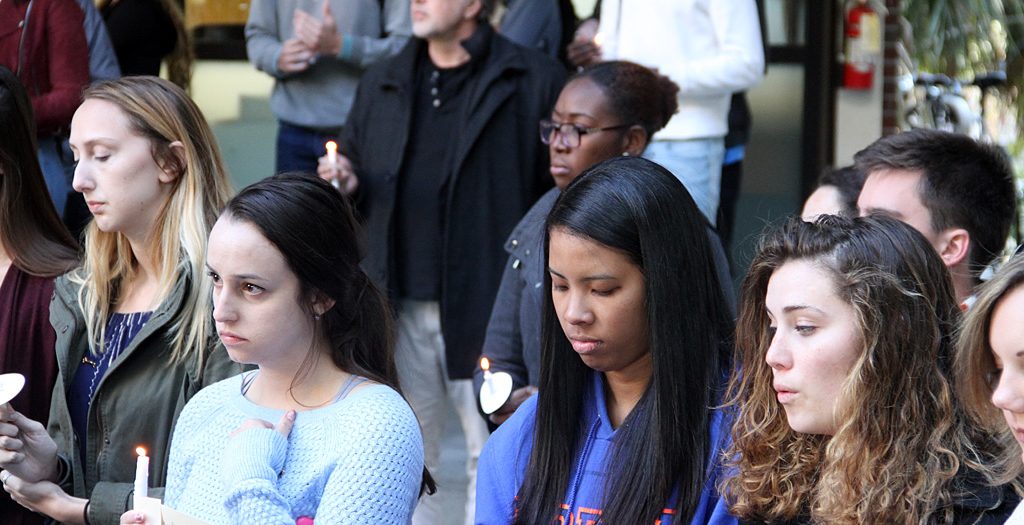 On Thursday the UF community honored the memory of two fallen students who died in a traffic accident over spring break.

Under the warm glow of a setting sun, the University of Florida’s architecture lawn served as the location for the university community to gather and honor two fallen UF students with a candlelight vigil.

A crowd of about 200 arrived on the lawn for the memorial service.

Alfano and Scherten were attending the Okeechobee music festival and left early. Alfano wanted to return to Boca Raton to introduce her new friend to her parents.

While waiting at a stop sign on State Road 710 near Southeast 128th Avenue, the students were struck from behind by driver Joseph David Lagrego, 22, of Englewood, according to the police report. Scherten died on the scene, and Alfano was transported to Lawnwood Regional Medical Center in Fort Pierce where she died seven hours later.

Though a somber mood fell upon the service on Thursday, the students’ friendship and the positive impact they had left while attending UF served as a source of relief and love for grieving friends, faculty and students.

UF President Kent Fuchs stepped up to the lectern, which stood adorned with roses and a pink ribbon.

“At UF, students like Nicole and Caroline are our spirit, they’re our soul,” Fuchs said. “When we lose one, much less two, we all share that loss.”

Alfano met Scherten through UF NaviGators International, a club that works to welcome international students. Scherten became good friends with Alfano, who helped her feel comfortable and eased her homesickness as she settled at the university.

Laura Wiedenhöver, architecture student at the University of Florida and friend of Alfano, recalled how one day, Scherten seemed stressed about an assigned paper because she didn’t know what an annotated bibliography or abstract was — documents she had not learned about in Germany. Alfano reassured Scherten by telling her both works were not difficult to write.

The two students especially bonded over their shared love of music. Alfano dreamed of designing concert halls in the future and switched from interior design to architecture because of her passion for music.

“Her smile and positivity was contagious,” Wiedenhöver said. “She was steadfast and became invested in every project assigned to her.”

Aside from her work in the architecture studio, Alfano also made time for many extracurricular activities, her social life and serving the community. She was a life guard at student recreation, an active board member of UF NaviGators, a sister of the Kappa Kappa Gamma sorority, fostered kittens from the Alachua Humane Society and took part in redesigning the inside of the Operation Catnip of Gainesville.

Meghan Mapes, 21, Alfano’s roommate and Kappa Kappa Gamma sorority sister, remembered the morning before the accident when they were still at the music festival.

Normally, Alfano styled her hair and wore her signature winged eyeliner, but on this day, she decided not to wear makeup and let her hair dry naturally. The two then walked out of their tent to go look at the art created for the festival.

Mapes recalled that Alfano did not even want to wear shoes, so they both walked barefoot. One moment with Alfano struck Mapes as the one she would remember most:

“She looked at me and said how free she was feeling that day with her natural beauty, and barefoot flowy tie-dye dress, no makeup, no hair done,” Mapes said. “I take great comfort in knowing that’s how she was feeling the morning of her last few hours here on this Earth with us.” 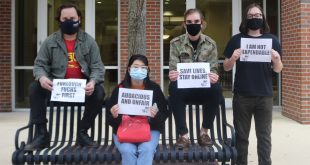 UF Faculty, Student Organizations Protest Against Spring Reopening During Board of Trustees Meeting

‘The Rigor Gap’ Study Suggests Florida Students May Be Falling Behind

The program aims to give more opportunities to low-income families that are participating in virtual learning by giving them access to educational technology and support.