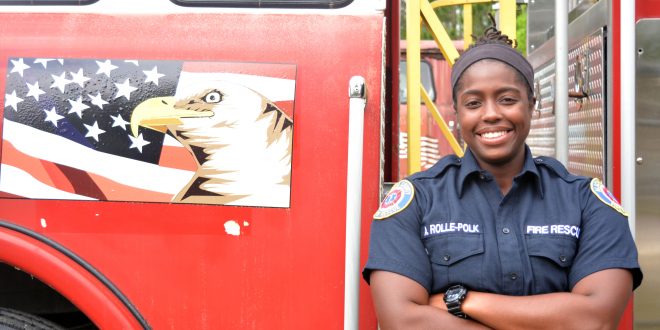 Alexandria Rolle-Polk, Alachua County's first black female firefighter. "If I can be that person that saves their lives or gives them a chance of hope," the 28-year-old said, "then that’s what I look forward to." (Savanna Kearney/WUFT News)

In a video call with WUFT News, Rolle-Polk talked about how she came into the job and what it’s like to be the only woman in a training class of 19.

WUFT: What made you want to become a firefighter?

Rolle-Polk: [I] always wanted to help people. I’m very pro-making someone happy, making someone feel like they deserve another chance at life.

So if I can be that person that saves their lives or gives them a chance of hope, then that’s what I look forward to.

Can you tell me a little bit about your journey to becoming a firefighter?

I sat down and talked with one of my friends who I work out with, and she was a firefighter in Tallahassee. And she just kind of was like, “You should [become a firefighter]. It’s a great career.”

You work 24 hours on, 48 off. That’s a great career. So I just decided to take a leap of faith and went with it.

I found an article online about your CrossFit accomplishments back in Tallahassee. Do you still do CrossFit?

Not as much as I want to, just because of all the training that we’re doing. Once orientation and everything settles down, I definitely plan on getting back into it because I love it. It’s a hard workout, but very, how do I say it — it feels good after.

Do you think that doing CrossFit helped you in your fire-rescue career?

Oh, for sure. It made me a lot stronger, a lot mentally stronger, as well, because sometimes I would walk into a CrossFit workout and be like, “I can’t do this.” And the coach would be like, “Yes, you can.” And I might have moved as slow as a snail, but I made it happen and got through it.

So that definitely helped me. I would say definitely mentally more than physically.

I also read that you’re 5 feet 1 inch. Do you think that has hindered you on the job at all?

In some aspects, like pulling a hose off of a truck. I definitely find myself having to crawl up and put my whole body into it trying to get it down.

Have you ever experienced discrimination in the workplace due to your gender and/or race?

Not really, not here at least. They’re all sweet guys at [Alachua County Fire Rescue], treat me just like one of the guys.

Sometimes when I’m struggling, they won’t help me. They’re like, “You’re going to have to do this in real life, and you’ve got to figure out how to do it.” And then in some aspects, they will help me. This will be a team thing, so someone will usually be here to help you. So they’ll help me out.

They don’t treat me any different. So I wouldn’t say there’s been any discrimination.

Where do you draw inspiration to accomplish your goals?

I would probably say my grandfather. He’s no longer with us, but he would always have a smile on his face. Even if it was something terrible, he would be like, “It could be worse.”

So I draw my inspiration a lot from him. I have things that remind me of him that I wear, like a necklace. I have a tattoo on me. It just kind of keeps me grounded.

It’s funny because my sister will get pissed, and I’m like, “Dude, it’s no biggie.” Watching some of the comments on Facebook about my article, and she’s like, “Oh, I’m about to go off.”

And it’s like, don’t let that man bother you. It’s not worth it. He’s not worth your time whatsoever. I think he’s my inspiration for most of it.

Have you experienced any backlash online from any articles about your recent hire?

There’s been a couple, but like I said, I don’t let it bother me. I let it fuel me more than anything. There’s always going to be people that don’t like what you do, and that’s life.

Why do you think it’s important to have diversity at Alachua County Fire Rescue?

It’s huge, I think. In this community, you see a lot of different faces. And you need to see diversity.

As hard as it may seem, someone walks in, looks like you, they kind of feel a little bit more at ease. Like OK, they know what I’m going through or know how to treat someone.

I think it’s more important for the little kids than anything: to see a black female being a firefighter. And hopefully one day, they’ll think about me and say, “Oh, maybe I do want to do firefighting. I saw that one girl how many years ago and maybe I can do this.”

… Growing up, I didn’t see one of me. Being a firefighter, you don’t see many African-American females.

Do you have any advice for girls who want to become firefighters?

It’s going to be a tough road. School is not easy. You have to overcome some obstacles that are extremely tough, physically and mentally.

And you just have to dig down and know that you can do it. I think it’s possible. You just have to find the right person who’s mentally and physically ready for that.

Savanna Kearney is a reporter for WUFT News. She can be reached on Twitter @savannakearney.
Previous March 1, 2017: Afternoon News in 90
Next Alachua County Farmers, Homeless Preparing For Late-Season Freeze

Can Turn Lanes Help Limit The Hundreds Of Traffic Crashes On State Road 121 In Gainesville?

One 4-mile stretch of State Road 121 through Gainesville has had nearly 900 reported car crashes in the past three years.