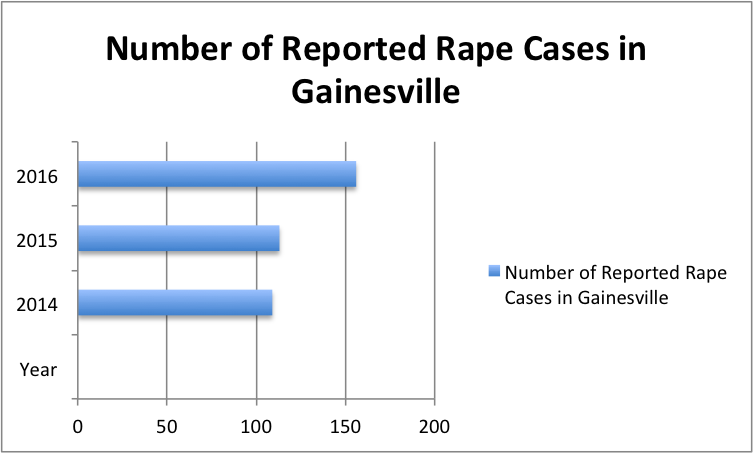 Rape In Gainesville And The Fight Against It

Isabella Jones wanted to go dancing last summer, like she had done so many times before.  She and her friends danced late into the night before leaving for an after party.

Jones never made it to the party.

“You Don’t Think It’ll Happen To You”

Jones was 25-years-old when she was raped.

She wants people to know it could happen to anyone, no matter who they are.

Jones went dancing at The Atlantic Nightspot in Gainesville, and met a group of people who invited her and her friends to a party.  After the club closed, they all talked about who should drive and who should ride with whom.

As they stood outside, Jones met a guy who offered her a ride. She thought everyone knew him.

They left together for the after party, but he took her to his house. She began feeling weird about him once some time passed and no one showed up at the house for the party.

When she asked him where everyone was, he said they were coming. He began to initiate things with her. She kept telling him no. She knew she had to put up a fight.

“He continued and I eventually was able to get out from under him, and I remember laying there thinking like this is really happening to me … something that everyone says can happen to anyone, is happening to me,” Jones said.

She broke free from the room and banged on his roommate’s door, who helped her out of the house and drove her to her car.  While in the car, Jones turned to social media to share her story. In doing so, she created evidence of what occurred that night — a decision that would ultimately help her start a legal case.

“I posted to Facebook that I was just raped because I wanted the time stamp, and I wanted the location,” Jones said. 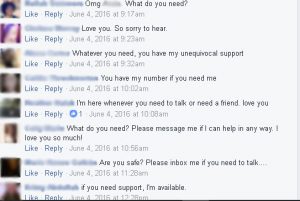 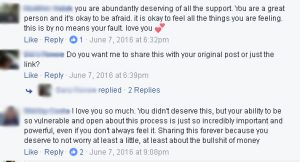 After the attack, Jones got to see a side of sexual assault cases most people don’t know. Her healing process wasn’t just mental or emotional, but also physical. She was given shots to prevent sexually transmitted diseases, which made her sick for weeks from the side effects.

Throughout her recovery, Jones wanted to remain vocal. After posting on social media multiple times, she received supportive responses from family, friends and past victims who had remained silent. They helped her heal.  She knew she wasn’t alone, and she wanted to make sure they knew they weren’t alone either.

“It was sad, very, very sad. How many people it had happened to because we have statistics and we have numbers, but I think it’s much higher,” Jones said.

Jones’ outlet of social media is still a tool for her recovery. As soon as the mugshot of her rapist was released, she shared it on as many social media platforms as possible.

Jones wanted to let others know about him and what he did to her, and she wanted to prevent anyone else from being in her position. She doesn’t feel she did anything wrong that night, and she strongly believes a woman shouldn’t have to change her habits just to prevent a sexual assault or sexual battery.

“If we put more effort into educating people and making sure people are held accountable for their actions, rather than continually creating safe groups to go out in, maybe it wouldn’t happen so much,” Jones said.

She also believes educational programs should be started to teach adults not to rape. She wants these programs to be started at a young age, while students are in elementary school. Jones believes if members of society were educated while young, sexual assaults or sexual batteries would occur less often.

Regardless, Jones wants others to know a survivor needs to do what is best for herself throughout the healing process, no matter what medium is used to make that happen. 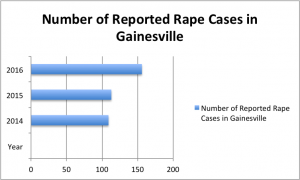 “We don’t think that there’s any increase of the number of actual incidents,” Tobias said. “But we’re happy that we’re actually getting more and more people to come forward and tell us their story.”

Tobias noted that number could be larger if more male victims reported their rape.

“Male or female, no matter what your sexual orientation is as well, it’s okay to come forward and tell when you are a victim,” Tobias said.

Tobias said while there is a misconception that the majority of rapes happen by strangers, that isn’t the case for Gainesville.

“A majority of our rape cases, as with any college campus city, are going to be acquaintance rapes, and a lot of times, it’s going to be alcohol-induced rapes,” Tobias said.

According to the Rape, Abuse and Incest National Network (RAINN), seven out of every 10 rapes are committed by someone the victim knows. This number includes acquaintances and current or former spouses, boyfriends or girlfriends. 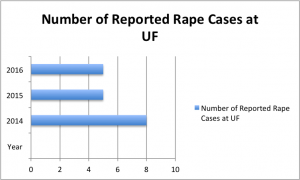 The University of Florida Police Department investigated 18 reported rape cases from 2014 to 2016. The highest number of cases were reported from 1515 S.W. Archer Rd., or UF Health Shands Hospital, according to UFPD reports. Out of the 18 reported cases, four involved a male victim.

Tobias also said unreported rapes are a problem in college towns like Gainesville.

“For every report of rape we get, there’s probably two that go unreported,” he said.

UFPD sends out alerts when threats occur in real time or if threats pertain to students in any way, including alerts regarding sexual battery or sexual assault. A full list of UF Alerts and Timely Warnings from 2014-2016 can be found here.

What You Can Do: Information For Victims

“We offer support groups. We offer advocacy through the criminal justice system,” Coleman said. “We can also go to court with people, help them get the things they need, in terms of housing or if they need referrals for food or things like that. We can help plug them into the community in whatever way they need.”

Victims who would like to speak with an advocate can do so by going to the Gainesville Police Department or the Alachua County Health Department during normal business hours. An appointment is not required to see an advocate. Victims can also choose to meet an advocate at a location in which they may feel most comfortable.

If a sexual battery or sexual assault victim does not want to speak to a victim advocate, he or she can to go to reportrapegainesville.org to learn more about what they can do. If someone would like to report an incident, they can do so anonymously through the website.

Tobias was clear on what the best way to prevent rape is.

“When you talk about rape prevention, a lot of time the prevention tips get sent to the women,” he said. “Let’s face it … 99 percent of date rape incidents involve a female victim, and you rarely hear anything going to the guys. So, guys, it’s easy: Don’t rape women.”

Both GPD and UFPD do offer various self-defense programs for protection and prevention against rape. One such program is Rape Aggression Defense (RAD) classes for women.

Besides the RAD program and a victims’ advocate program, GPD and UFPD also offer a variety of self-defense courses for both men and women and programs on relationship violence. For more information on the programs or for tips on how to stay safe, visit GPD’s website or UFPD’s website.

Isabella Jones was among rape victims, who received help through the victim advocate service.

“One of my advocates was wonderful and made me feel very safe throughout the process,” she said.

Jones also sought counseling through a private therapist, and talking about it openly in public was a large factor in helping her cope.

One of the most helpful coping methods was surrounding herself with positive people. And for those going through what she did, she recommends “remembering that you’re not alone, and to just be sure you surround yourself with people that have no problem echoing the sentiment that it isn’t your fault.”

She believes being reminded that her assault was not her fault was really important for her recovery.

“The guilt gets under your skin,” she said. “It’s toxic.”

*Isabella Jones is a pseudonym given to the victim to protect her identity.

Darling is a reporter for WUFT News and can be contacted by calling 352-392-6397 or emailing news@wuft.org.
Previous Shall or May? Florida’s Public Record Law Hangs On By One Word
Next Arreola Upsets Incumbent Carter In District 3 City Commission Race, Warren And Ward Also Win