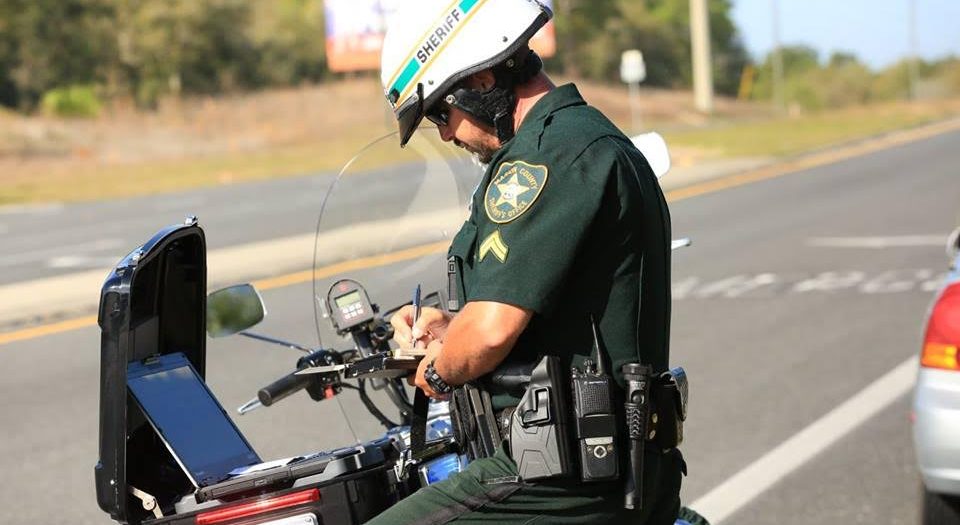 The first S.T.E.E.R. operation happened on Thursday, March 9 on State Road 200 in Ocala. A total of 129 traffic stops were conducted, 93 citations were written and 33 warnings were issued among all the agencies involved according to MCSO. (Photo Courtesy of Marion County Sheriff's Office)

The Marion County Sheriff’s Office have put into action again a safety program that was disbanded in 2013.

The Safety Through Engineering, Education and Responsibility, S.T.E.E.R, program was reinstated in February of this year in hopes of minimizing traffic accidents.

“Your car is probably one of the most dangerous weapons you could ever possess and I think people need to be very careful when driving on the road,” said Marion County Sheriff’s Office spokeswoman Lauren Lettelier. “They need to take driving very seriously [and] that’s what we’re trying to emphasize here…it’s literally a flying missile going down the road at whatever mile per hour you’re doing”

S.T.E.E.R’s purpose is to conduct monthly patrols in areas of Marion County that have experienced an increase in accidents, fatalities, reckless driving complaints and other traffic related activities.

“I know that sometimes it’s not looked at as the best way to do it but if it saves somebody’s life, that’s the way we’re going to do it,” Lettelier said. “If we have to write a ticket then we will do that to save someone’s life.”

“We had a new sheriff come into office and he disbanded the traffic unit which then put a pause to the S.T.E.E.R program,” Lettelier said. “Because the traffic unit was really the one that focused on that program”

Since the programs disbandment the number of traffic accidents in Marion County have increased 33 percent, according to the Florida Department of Transportation.

Current Sheriff Bob Woods reinstated the traffic unit and S.T.E.E.R because he believed it was important.

“He was in the traffic unit when he was at the Ocala Police Department for quite some time and that is one of his great passions,” Lettelier said. “He believes that this should be one of our top priorities and that’s what he’s made it.”

S.T.E.E.R is a multi-agency program partnered between MCSO, Florida Highway Patrol and the Ocala, Belleview, and Dunnellon Police Departments.

“It’s an excellent opportunity for us to partner with the Marion County Sherriff’s Office as well as several other police departments,” said FHP spokesman Patrick Riordan. “Anything we do collectively with other law enforcement agencies with the mission to make the community a safer place, I think it’s a good thing”

The agencies will work together to conduct a proactive patrol once a month.

“I think it’s good that the public sees that the multiple agencies are coming out [and] working together for their benefit,” said Brennan Grady, officer at the Ocala Police Department. “I think it’s needed, we’ve had an uptick in crashes and more specifically in fatal crashes over the last year and I think the proactive and traffic enforcement is needed on some of the roadways here in Marion County.”

“Put down your phone, focus on your driving, focus on making sure you’re getting to point A and point B safely,” Lettelier said.

Daniela is a reporter for WUFT News and can be contacted by calling 352-392-6397 or emailing news@wuft.org.
Previous Florida Leads Nation In Job Growth, But Unemployment Rate Goes Up
Next UF Students Call For Student Body President-Elect’s Resignation After Spring Break Arrest

At 3:15 a.m. the morning after Thanksgiving Day, ArchAngel Gunsmithing and Outfitters was broken into. …