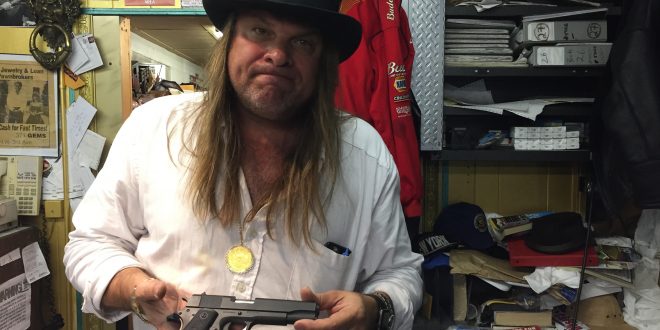 Richard Selwach, owner of Gainesville Guns, in his shop on Thursday. He says a bill from state Sen. Daphne Campbell that would require a mental-health evaluation for a concealed-carry application "would be a redundant and a feel-good policy." (Monica Humphries/WUFT News)

Every morning, Richard Selwach takes his titanium .38 revolver off his nightstand and puts it in his pocket.

He grabs the newspaper, walks his dog and then heads to work.

Selwach, owner of Gainesville Guns as well as the Best Jewelry & Loan Pawn Broker, said he has been an owner and seller of guns for 32 years. The current laws on firearms, he said, are plenty.

“To put any more restrictions would now be interfering with my rights as a citizen,” Selwach said Thursday.

But state Sen. Daphne Campbell, D-Miami, disagrees — specially on when it comes to the mental health of the gun buyer.

She recently filed Senate Bill 956, which would require the Department of Agriculture and Consumer Services to require a mental-health evaluation for those wanting an application for a license to carry a concealed weapon or firearm.

“Too many times, we’ve seen the tragic consequences of the mentally unstable wielding a gun and the innocent victims who have paid the price for the madness,” Campbell said in a news release. “This is a basic measure to determine the mental stability of those seeking to carry a weapon.”

The bill, which still has a long legislative road before making it to Gov. Rick Scott’s desk, is aimed to protect potential victims of gun violence.

But Andy Pelosi, executive director of the Campaign To Keep Guns Off Campus and co-chair of the Florida Coalition To Prevent Gun Violence, has hesitations about it.

“On the one hand, it’s supposed to be well-meaning,” he said, “but what can also happen is stigmatizing a community based on a diagnosis.”

Yet Pelosi said he does see how laws and gun deaths go hand in hand. Florida has about 2,400 gun deaths a year, he said, and is one of the leaders in such deaths across the nation.

Meanwhile, Selwach maintains that there are already enough laws in place and that the government should focus on enforcing existing laws.

Senate Bill 956 “would be a redundant and a feel-good policy,” he said. “When I sell someone a gun, I’m the one doing the evaluation, and I can tell if you’re cuckoo.”

Selwach said he has sold more than 10,000 guns but does consider himself a strict gun seller. For example, he keeps the guns locked in the back of his shop and only “shows a gun to someone who’s going to buy a gun.”

A mental-health evaluation, he said, would infringe on his Second Amendment rights while not stopping people from buying guns.

Marion Hammer, executive director of Unified Sportsmen of Florida, a nonprofit whose purpose is protecting firearms rights, said that if gun owners have to go through mental evaluations, others should have to, too.

“There are a number of people in other positions that have great impact on people,” she said, noting reporters, teachers and legislators. “A bill like this is just a harassment by people who hate guns.”

Monica Humphries is a reporter for WUFT News and can be reached at 407-256-6899 or monicamh@ufl.edu.
@https://twitter.com/MonHumphries
Previous Witnessing Violence? Involve Yourself In The Situation, Gainesville Org Says
Next March 3, 2017: Morning News In 90