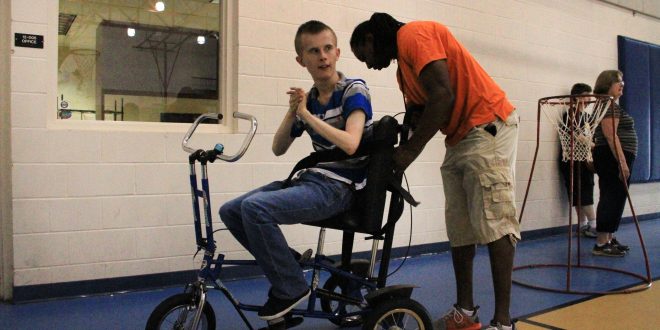 Sidney Lanier Center physical education coach Winston Church helps strap 18-year-old Brandon Laforce into an adaptive bicycle on Wednesday. Laforce's family is participating in the Great Bike Giveaway, which could provide him with his own custom-made bike. (Kayla Ziadie/WUFT News)

The 18-year-old has Dandy-Walker syndrome (which causes malformation of the brain), cerebral palsy and autism. And other than words like “hi” and “bye,” he’s unable to speak.

Laforce attends the Sidney Lanier Center, a special-needs school in Gainesville. Though he’s unable to ride most bicycles, he can pedal along on the adaptive ones provided by the school.

But Laforce’s mom, Kriscilla, wants him to be able to ride outside of school, too.

“He’ll feel normal for once,” she said. “[He would] just be able to do what normal kids do.”

So Kriscilla Laforce registered her son for the nonprofit Friendship Circle’s national campaign the Great Bike Giveaway. Since 2011, the campaign has provided 900-plus custom-made bikes to those with special needs under 30 years old.

This year, the program aims to give out between 250 and 300 bikes, according to Friendship Circle family coordinator Tzvi Schectman.

“To go riding with friends or family members is something that we all grow up doing,” Schectman said. “It’s an opportunity to feel included and be part of what everybody else is doing. … If they don’t have an adaptive bike, they are left out.”

To receive a bike, participants attempt to raise the cost of it, which usually ends up being several thousand dollars — though the exact amount varies depending on the needs of the person.

Friendship Circle then uses this money to make the bike.

Participants have one month to fundraise. This year’s Great Bike Giveaway launched on Feb. 15, meaning the deadline to donate is March 15.

“He doesn’t know how to pedal [a normal bicycle] because of his” cerebral palsy, Kriscilla Laforce said. “He would enjoy the bicycle and tell everyone he has a bicycle now.”

Adaptive bikes typically have three wheels and larger pedals with straps to keep the rider’s feet in place, according to Winston Church, Sidney Lanier’s physical education coach. Many also have handles to be pushed from behind or pulled in front.

“It’s just another opportunity to get exercise, which is so important because a lot of them aren’t as mobile as we are, and they can’t just get up and run and do something,” Church said. “I feel like if they had an adaptive bike, they could definitely join their friends and be a part of their peer group and just be more active.”

Specifically for Laforce, an adaptive bike would allow him to go on rides with family members and spend more time with them, his mom said.

“He would love to have a bicycle. That way, we can go as a family, too,” Kriscilla Laforce said. “It would just feel like a good, normal life for once in our lifetime.”

This story has been updated to reflect the latest figures on the linked fundraising page.

Kayla Ziadie is a reporter for WUFT News. Follow her on Twitter, @KaylaZiadie.
@KaylaZiadie
Previous After Sold-Out London Shows, Cuban Artist Returns To Gainesville Roots
Next Mar. 2, 2017: Morning News In 90