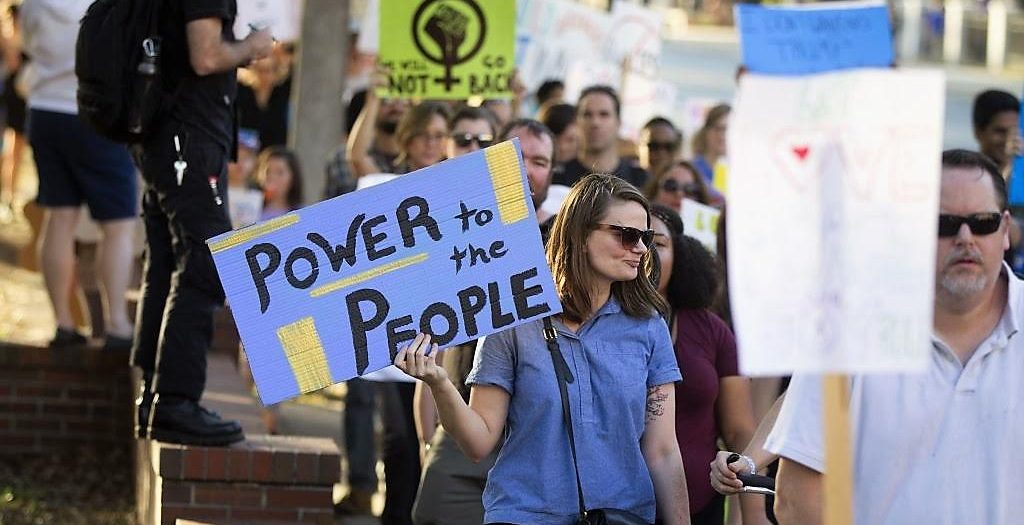 A woman holds a sign reading “Power to the people” as protestors march along University Avenue during the Freedom from Fear March in November. (Michael Stone/WUFT News)

An anti-Trump protest Freedom from Fear March, which was held in November, was called one of the largest moving protests in Gainesville by the Gainesville Police Department.

The event was peaceful except for two incidents between protesters and motorists.

“One was where a car lurched out into a group of us,” said Paul Ortiz, a UF history professor and longtime community organizer who was participating in the march.

The other, which was caught on camera by a protester, showed a motorcyclist who was blocked at an intersection by protesters crossing the street. He then knocked a man down with his motorcycle after beginning to move forward.

“He was very visibly angry and was yelling at people and was actually threatening people,” Ortiz said.

Republican State Senator George Gainer has filed a bill that would make drivers, like the motorcyclist, immune to civil liability if they injure or kill protesters who block public roadways, as long as it was unintentional.

Senate Bill 1096 would make protesting in public roadways without a permit a second degree misdemeanor, which is punishable by up to 60 days in jail and a $500 fine. More importantly, it would immune drivers from a civil lawsuit unless the injured person could prove the driver intentionally inflicted harm.

“The intent is to make sure that protesters and their right to speak doesn’t infringe on safety or the safety of anyone else around them,” Gainer said.

Republican legislators in 17 other states across the country have filed similar legislation.

Gainer said that protests in Miami and Tampa, as well as at the Dakota Access Pipeline and anti-Trump protests across the country, are the reasons for the bill.

“They should have every right in the world to protest the things they disagree with,” Gainer said. “But they don’t have the right to randomly go out into the interstates and attack the cars, beat on the windshields, jump up on the hoods and act like they’ve been hit. In some cases, they set themselves up to be hit.”

Clay Calvert, a UF professor and director of the Marion B. Brechner First Amendment Project, said the bill raises huge First Amendment concerns that need to be addressed.

“Clearly this bill is designed to go after people who are anti-Trump in protesting,” Calvert said. “If you look at the underlying purpose of this bill and the intent behind it, it’s designed to stop anti-Trump protesters.”

While Gainer admitted that anti-Trump protests across the country helped inspire the bill, he said there’s a way to protest that doesn’t include disrupting traffic and potentially endangering lives.

He urged those who want to protest to organize it first and request a permit from the city.

Gregory Payne, a founder of the Sacred Water Camp, often protests the Sabal Trail Pipeline by blocking roads to prevent work trucks from accessing construction sites. He said this bill won’t change what he does.

“I just pray that we don’t run across some crazy looney tune who just wants to run down a couple of people and get away with it,” Payne said. “But no, it will not change the way I do things.”

Calvert said the second part of the bill was what was “even more disturbing.”

“So now if I’m doing it illegally, part two gives somebody the ability to unintentionally injure somebody,” Calvert said. “It’s an example of legislative overkill in reaction to anti-Trump protests.”

Gainer said drivers who hit protesters can still be criminally charged, but protesters would have to prove the driver did it intentionally in order to hold them liable in civil court.

Ortiz, who’s picketed for labor rights and marched for civil rights for decades, said he was glad to hear a similarly proposed bill in Arizona was recently shot down.

“Driving is a privilege. Speech is a right,” Ortiz said. “Your right as a driver is not protected by the U.S. constitution. Your First Amendment right to speech is.”

Ramsey is a reporter for WUFT who can be reached by calling 352-392-6397 or emailing news@wuft.org.
Previous As Suicide Rate Climbs, Officials Encourage Mental Health Care
Next Witnessing Violence? Involve Yourself In The Situation, Gainesville Org Says