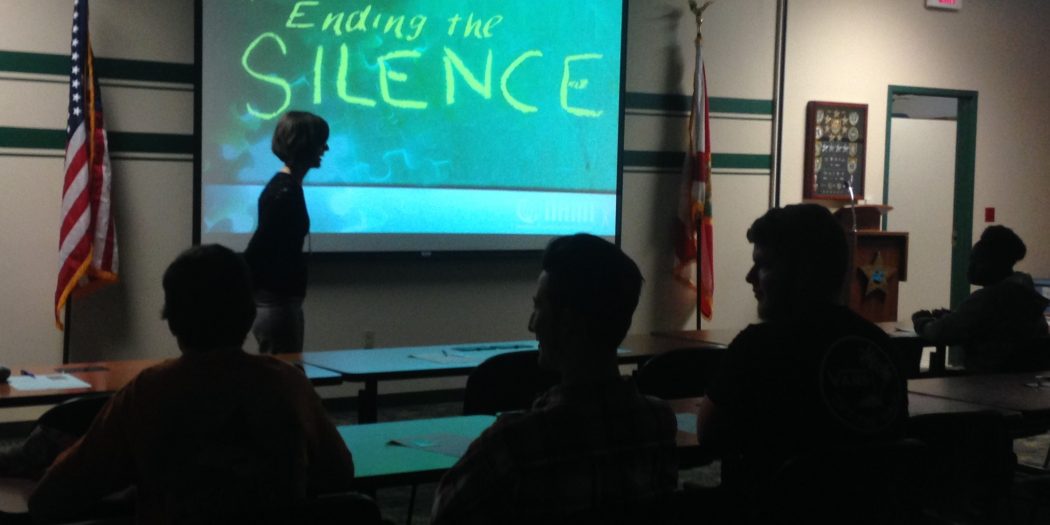 Terrie Mullin, a representative of the National Alliance on Mental Illness' Gainesville chapter, discusses the importance of mental health awareness at a forum Monday. As suicide and other rates related to mental health climb in Alachua County, Mullin and others in the county are hoping to host more events that promote mental well-being. (Abby Stafford/WUFT News)

Issues related to mental health have been increasing among teens in North Central Florida over the last several years, officials say.

They often lead to self-harm, such as ceasing eating, cutting and sometimes even suicide.

Robert Dentmond, a 16-year-old Gainesville High School student, was killed by police after threatening to take his own life with a replica assault rifle in March 2016.

Sixteen-year-old Christie Bassett, a Buchholz High School junior, died in the hospital from injuries related to a self-inflicted car accident on Jan. 2.

And Diamond Ward, another 16-year-old Buchholz student, was found hanged in her bedroom on Jan. 3.

“They’re common,” Terrie Mullin, a representative of the National Alliance on Mental Illness’ Gainesville chapter, said of mental illnesses at the forum, “but what I want you to know is that they’re treatable.”

NAMI and the Alachua County Sheriff’s Office say they’re working to combat the growing trends of mental-health issues by considering other courses and forums like Monday’s. But no future ones related directly to teens have been scheduled yet, and the last time one was held before Monday was in May 2016, Alachua County Teen Court case manager DeAndre Fields said.

Ideally, he said, NAMI would host a bimonthly forum at the sheriff’s office, and the organization did hold presentations at Buchholz and Eastside after the suicides there.

“We want to let people know that it’s OK to talk about mental health and suicide issues with professionals,” Fields said before the forum, which was attended by roughly 20 people, including six teens.

“Juveniles many times don’t feel comfortable addressing [mental health],” he added. So events like Monday’s forum are “giving them an opportunity to speak out.”

The event comes at a time when suicides, self-harm and eating disorders are on the rise in Alachua County.

Teen suicides in the county have been climbing since 2011 and are now higher than the average for the state, according to Florida Department of Health data.

Teen visits to the hospital from self-inflicted injuries in the county have been twice the average in the state for the last four years.

And the rate of Alachua County teens visiting the hospital because of eating disorders is only slightly above the state average, but the rate is on the rise after significant declines between 2007 and 2012.

Yet such problems aren’t just Alachua County ones.

Depressive symptoms and episodes, suicidal thoughts, suicide attempts, and injuries in high school students have increased nationwide by 4 percent since 2013, according to U.S. Department of Health and Human Services data. (Yet for those categories, Florida is similar to or lower than the national percentages.)

One in five teens deal with mental illness, Mullin said, and over half of those do not get the help they need. She attributed this to the negative stigmas surrounding mental illnesses.

These issues are ones that Sheriff Sadie Darnell would like to improve upon.

In attendance Monday, Darnell shared with the group that her mother attempted suicide three times, but after seeking help, she lived to be 92 years old.

“It can be helped. You can be helped if you’re in that place,” the sheriff said. “We want you all to be able to live as long as my mom.”

A presentation during the forum emphasized the warning signs of mental illnesses.

Those signs include the person saying she or he won’t be around, or her or him giving away possessions.

“The most important thing is that you talk to someone,” Mullin said of teens struggling mentally. “It’s not a sign of weakness to ask for help.”

Abby is a reporter for WUFT News. She can be contacted at wuftnews@gmail.com
Previous Justices Uphold Ban On Openly Carrying Guns
Next Proposed Florida Bill Would Protect Drivers Who Unintentionally Hit, Kill Protesters