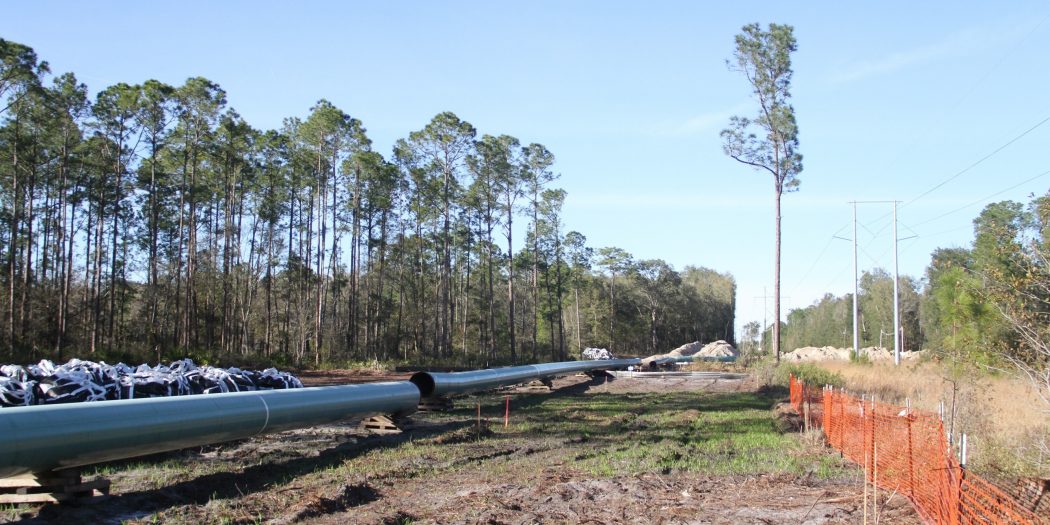 The expanse to the construction site for the Sabal Trail Pipeline that borders Robin Koon’s property. (Brett Keeler/WUFT News)

A North Florida Seminole community is dealing with the loss of their loved ones for a second time as their remains were disturbed to build the Sabal Trail Pipeline. One tribal Elder’s body has been sitting in a morgue waiting for a contingency plan for his funeral to be developed.

Tina Elmore-Wright watched her father, Sandy “Wanders on Water” Elmore, suffer in poor health for years. On February 2, he died at the age of 73. Nearly a month later, Elmore-Wright still has no idea what she is going to do with his remains.

Elmore was an Elder of the Seminole Tribe of North Florida. After his passing, his family was planning to place his remains with those of friends and fellow tribe members near Station Pond in Bronson. As an Elder of the tribe, Elmore is supposed to be laid to rest during a traditional ceremony.

“Station Pond was chosen because, when not in drought, it connects to the Gulf of Mexico,” Elmore-Wright said. She said the location is also where her mother’s ashes were scattered five years ago.

Another member of the tribe, Robin Koon, owns land near the pond and has been maintaining ceremonial grounds containing the ashes of numerous relatives and tribe members since 2001.

Koon said his property was included in the path for the 515-mile Sabal Trail Pipeline.

The Sabal Trail Transmission LLC used the Natural Gas Act of 1938 to establish eminent domain — the right of the government to take private land for public use in exchange for compensation — and force hundreds of landowners to sell property along the pipeline’s path through Alabama, Georgia and Florida. The pipeline company, in conjunction with the Federal Energy Regulatory Commission (FERC), determined that a cleared stretch of forest containing power lines was the best spot for the pipeline to pass through, near Koon’s property.

When Koon was first contacted by the Sabal Trail Transmission to purchase part of his property for $1,400, he said he ignored them. Koon, a bit offended with the offer, had no desire to sell the land that he purchased from his father, whose ashes were the first scattered on the property. After growing tired of fighting the pipeline company, Koon gave up, and the land was claimed by Sabal Trail Transmission LLC.

“I feel like I failed my family and my tribe,” Koon said.

“How can I honor my father by putting him out in that destruction?” Elmore-Wright said. “He wouldn’t stand for that.”

Andrea Grover, the director of stakeholder outreach for the Sabal Trail Transmission said, “Unfortunately, the gentleman you noted [Koon] refused to communicate any of his concerns to Sabal Trail until construction was started.”

“Even at this juncture, Sabal Trail has attempted to work with [Koon] and redirect construction work in conjunction with the FERC representative to reduce the workspace impacts in particular areas near where he noted particular concerns not related to his claims today,” Grover said in an email.

She said the Sabal Trail Transmission was “led to believe he was satisfied with these late modifications made in an effort to help him.”

Koon admitted that his refusal to communicate probably played a factor in his powerlessness by the end of the ordeal. Koon said that he was offered to have the top couple inches of dirt saved from his cemetery so he could keep it. Wanting to leave his family where they lie, he refused.

“You used to be able to hear them in the way the wind would whistle as it blows through the trees,” Koon said as he looked past the construction. “That’s all gone now.”

Correction: The original version of this story indicated Koon accepted a monetary offer for his land from Sabal Trail Transmission LLC, but he in fact didn’t.