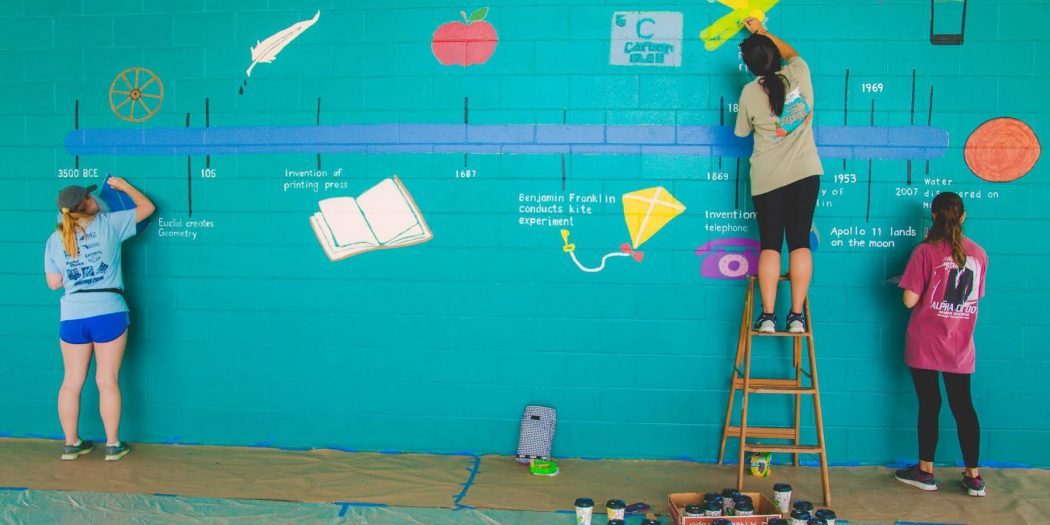 On Friday, as notification emails for acceptance into Stephen Foster Elementary School’s STEM magnet program were sent out, UF students made their way in, preparing for a weekend-long beautification project at the school.

Project Makeover is a UF student-run organization that annually selects and decorates an Alachua County elementary school. More than 1,000 student volunteers spend one weekend in the spring giving the school a makeover, including painting murals, planting gardens and creating alternative workspaces such as outdoor classrooms.

Founded in 2008, Project Makeover chose Stephen Foster Elementary to be their tenth makeover. According to Lisa Peterson, principal of Stephen Foster, they approached their district representative for Project Makeover, submitted a request to be selected in May and were notified in early fall that they had been chosen.

“Our school has the STEM magnet program for public school students, so we’re highly focused on project-based learning. It was basically a science theme,” Peterson said.

In waves of 200 to 300 at a time, students donated their time decorating, painting moon phases and famous scientists on walls and creating a “maker space” where students can collaborate and problem solve.

“[Monday morning], there was a wide-eyed sense of awe and excitement and joy over the maker space. [Students] were so excited. There was a real look of interest and enthusiasm,” Peterson said.

There's a lot of energy at Stephen Foster today. You can feel how excited students are. @WUFTNews pic.twitter.com/Uj5VlPoOhi

These makeovers impact more than just the aesthetic of the school, according to Lisa Scott, an associate professor of psychology and director of UF’s Brain, Cognition and Development Lab.

“There are ways of designing environments to support learning,” Scott said. “Visual stimuli would be particularly important in drawing students’ attention.”

There is a time when clutter can be more distracting than helpful, but that can be remedied by ensuring that each piece serves an educational purpose.

“Design work station or specific topics that have visuals that are not just extraneous visual information,” Scott said.

“As far as student academic achievements, our overall school grade improved one letter grade,” Burney said. “We don’t attribute that to one thing, but I’m sure things like Project Makeover helped improve the level of engagement and awareness.”

Burney said that the murals and landscaping put in place by the Project Makeover team look the same as they did when they were first created and that a smaller group of volunteers will be visiting in the next few months to touch things up.

“[Project Makeover] gets better and better every year,” Burney said. “There was more of a focus on sustainability this time around. The things that were done would look good even in years to come.”

When a school is matched with Project Makeover, the team works with administrators to craft a plan and a theme. Selection and preparations start in May and continue into February or March when the makeover occurs.

There has not be any formal data collection conducted by the Project Makeover team, although current director Lucy Toman said she plans to look into launching research. She said the majority of feedback comes from teachers who claim their students are more engaged and site visits to past schools.

“If we can go in and make a positive impact to maybe help a child be more excited about learning and more enthusiastic about staying in school, that’s the best impact we can have,” Toman said.

Project Makeover has worked with 10 of 22 Alachua County public elementary schools. Toman said that while there are still many local schools that can be selected, she would like to see the organization expand.

“I think it would be really cool if we could extend Project Makeover to other counties or expand to other universities,” Toman said.

Lena is a reporter who can be contacted by calling 727-534-6278 or emailing l.schwallenberg@ufl.edu.
@@l_schwallenberg
Previous Sabal Trail Pipeline Shooter Identified
Next Meet The 2017 Gainesville City Commission District 3 Candidates