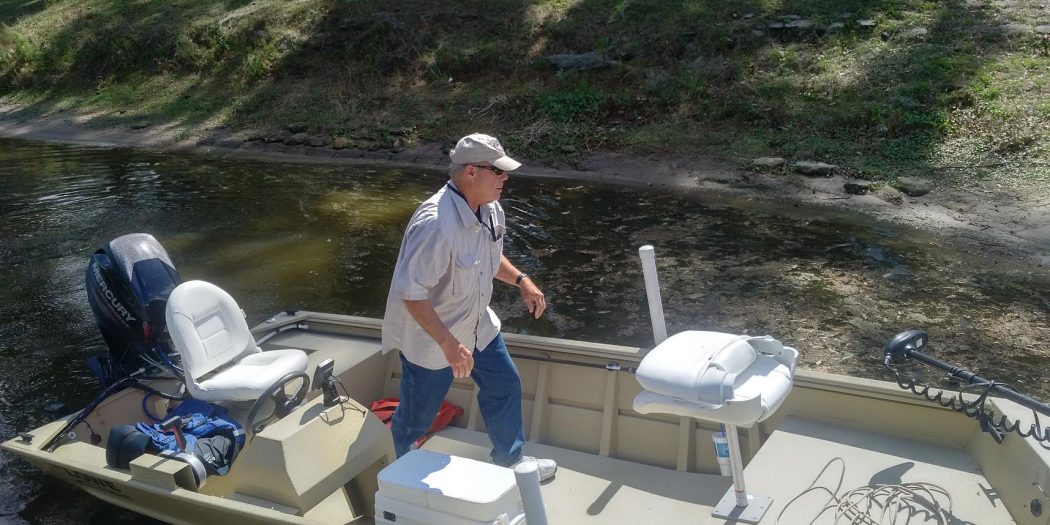 Hal Wilson, 69, visits Newnans Lake for the first time in 20 years Monday. He said he remembers the water level being higher. Due to algae, parts of the lake, once 10 feet deep, are now just one -to-two feet deep. (Caitlin Ostroff/WUFT News)

County officials and a local representative are asking the state for almost half a million dollars to save Newnans Lake.

House Bill 3069, proposed by Rep. Clovis Watson Jr. (D-FL), is the second bill in recent years to ask for money to stop an onslaught of algae that has grown in the lake. The first $456,000, granted during the last legislative session, went to research how to stop the growth.

For the second phase, Watson is asking for $470,000 to construct a permeable bio-filter, or a reactive weir, to catch harmful runoff coming into the lake from Little Hatchet Creek, according to the appropriations project request. The bill is currently in the Agriculture and Natural Resources Appropriations Subcommittee.

Much of the runoff, which includes phosphorus and nitrogen, comes from the area near the Gainesville Regional Airport, said Chris Bird, the director of the Alachua County Department of Environmental Protection.

When ditches were dug to drain the area in order to build the airport, they were dug too deep, reaching clay in the soil, he said. In turn, phosphorus from the clay ran off from Little Hatchet Creek southwest to Newnans Lake, located about two miles east of Gainesville on Highway 20. Urban development has also increased nitrogen runoff.

Because of this, the nitrogen and phosphorus act as a fertilizer for the chlorophyll in the water, increasing the amount of algae, he said. Over the last few decades, the chlorophyll level has risen, making it one of the lakes with the highest content in the state.

Water filled with chlorophyll won’t support the fish in the lake, Bird said. This would create a chain-reaction, potentially harming the birds that eat the fish and taking away from fishing opportunities at the lake’s pier.

On Monday, Hal Wilson, a Gainesville resident since 1986, returned to Newnan’s Lake to test out a new fishing boat. It was his first time coming back in nearly 20 years.

But his test run didn’t last long. Wilson said the water level was two- to-three feet shallower than he remembered it.

“It was nice, but there was hardly any water,” the 69-year-old said.

The lake, once 10 feet deep, has some areas now only one or two feet deep because algae has settled and sunk, creating a layer of muck, Bird said. While some of the algae could be removed by dredging the lake, or scrapping or sucking the materials from the bottom, this can’t be done at Newnan’s Lake due to about 100 5,000-year-old Native American canoes buried at the bottom.

“We haven’t figured out a way of (dredging the lake) without destroying these ancient canoes,” he said. “There’s a conflict between trying to preserve that heritage and cleaning the lake up.”

But until someone figures out a way to do that, Bird and Watson want to keep more nutrients and phosphorus from entering the lake and adding to the problem, Bird said. To do this, they’re asking the state legislature for the $470,000 to build the bio-filter, which will use good bacteria to filter out the nitrogen and phosphorus.

“Unfortunately, Newnans Lake, it really needs improvement,” he said. “The lake didn’t get in the condition it got over night. It took decades. It probably took the last 50 years. Realistically, we’re not going to turn it around over night.”

Avoiding A Florida On Fire: The Importance Of Prescribed Burns

When you visit Gainesville’s creeks, it’s easy to hear the chorus of rushing water running …