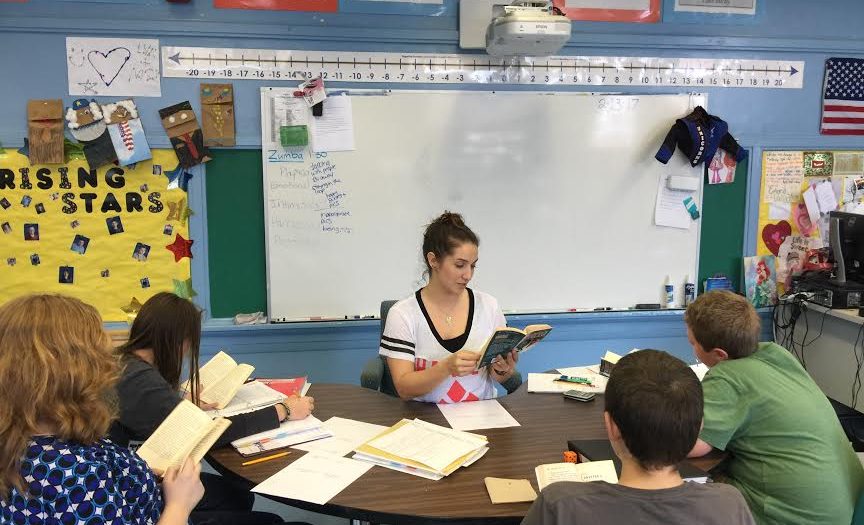 Gloria Valladares was next in line to order at Starbucks when she overheard a conversation between two employees.

“It was a 10-minute break and you’re 45 minutes late,” the girl said to her coworker.

The late employee brushed her off and turned his attention to Valladares. Before taking her order, he commented on his coworker’s criticism.

“You’ll have to excuse her,” he said, calling his coworker “psychotic”.

“Actually, I teach psychotic, schizophrenic kids, so I’m pretty sure you owe her an apology,” she said. “And I can tell you firsthand you’re just a rude person.”

She tells her kids she’s not mean, she’s just “real.” And her reasoning is solid. Why do “normal” adults have trouble meeting the standard she sets for her 6th, 7th and 8th grade special needs students?

“I have to stop comparing people to my kids,” she said, a goal that might be hard to accomplish considering her students have become like family to her.

Every morning her five students walk into their classroom at Sidney Lanier Center and are greeted by “Ms. V’s” singing and walls full of artwork – their own creations. The window is painted with the words “Our House” and the rainbow poster right inside the back door reads “Our Family, A Promise is a Promise, We Are the Future.”

Valladares believes her students can always promise to be better, in and out of the classroom.

“I’m not asking you to be perfect,” she explains. “Just to do a little better.”

Another poster on the opposite side of the room features a picture of a football player decked out in orange and blue riding a gator, along with all the students’ names. They made it for the 2015 homecoming parade, which they all walked in. She insisted on a 5-foot long poster because she wanted her kids to feel special.

The man riding the gator is Keanu Neal, who now plays for the Atlanta Falcons. The fact that he was willing to give an interview a few days before playing in the Super Bowl as a favor to Valladares reflects how most people seem to feel about her.

He met Valladares while volunteering at Westwood Middle School, where she worked before coming to Sidney Lanier, and continued to volunteer in her classroom when she moved schools.

“She’s changing lives,” Neal said. “She’s building great relationships with kids that may not have great relationships at home. Her building relationships the way she is, it builds like a family. And she definitely sees every kid that she works with as family, and you can tell that she really loves them, you know, and that’s the true definition of a hero in my opinion.”

Valladares has been at Gainesville’s Sidney Lanier Center for two and a half years now. Despite the confidence she radiates in the classroom now, transitioning to a new school was scary for her.

She didn’t know any of their names, but she knew all her students on paper before she started.

One child had a history of peeing on computers or throwing them out windows when he was upset. No computers have been broken in Valladares’s classroom so far, but his mother is still paying bills from his destructive habits as an elementary student.

“I think the biggest thing is her passion to help kids,” Principal Royce Kamman said. “She is probably one of the best people I know – and I’ve known her for over 12 years – who is a great advocate for kids.”

The public school is catering to 170 physically and mentally disabled students, from kindergarten to age 22, through Sidney Lanier’s transition program, and the teachers are key to making things run as smoothly as they can.

“Especially for new teachers, I’m not looking for this kind of extensive background and experience,” he said. “What I really look for is how you relate to kids. Can you be a bridge builder and can you relate to kids and help them navigate the tough times of going to school, especially in a school where sometimes their physical needs outweigh their academic needs from time to time? And so, if I can find someone who can relate to that and has a passion for wanting to work with kids that are challenging, then this is definitely the place for them.”

Valladares always knew she wanted to be a teacher, but her passion for special education was sparked her freshman year of high school. After Living Faith Fellowship, the private Christian school she attended from kindergarten to 8th grade shut down, she transferred to public Buchholz High School.

“Going to BHS was the first time I was ever exposed to kids with disabilities,” she said. “I lived a very sheltered life.”

She noticed one student in particular at her new high school, a boy with severe autism who was constantly bullied and received no help from the school’s faculty. When one of the bullies hit him with a ball in gym class, he picked up his own ball to hit back, but was stopped by the coach, then written up and suspended.

Valladares went to the coach then the principal trying to get the real story across and was brushed off both times. That’s when she knew she had to advocate for special needs children.

And it doesn’t end at Sidney Lanier. Last year she went on a mission trip to Haiti with the music teacher at Sidney Lanier and her good friend, Donald DeVito, to help develop a special needs education program there.

“I think when you give teachers like Valladares the opportunity to engage their students in curriculum in ways they know will work for the student, not just in scripted, formatted ways that are standardized, they have the ability to reach all learners. And she can reach all learners,” DeVito said. “You can put anybody in her room and they’re going to show progress.”

Whatever Valladares is doing seems to be working because all her students passed their end-of-course exams last year, a rarity for most kids taking standardized tests despite disabilities.

“It’s crazy how much these kids go through, and we’re like, ‘No, take the end-of-course exam,’” she said.

Valladares’ ultimate goal is to reopen Living Faith Fellowship Church as a private school for students with disabilities.

“Then I can teach the kids in the way that their educational needs need to be met individually,”she said, “instead of what’s being dictated from someone who’s sitting in Tallahassee and has no idea what’s going on in these kids’ lives.”

Teal Garth is a reporter for WUFT News and can be reached at tealgarth@gmail.com or 850-380-1366.
Previous UF Senior Pitcher Frank Rubio’s Four-Year Journey
Next Seahorse Key Opened For Visitors Before Nesting Season