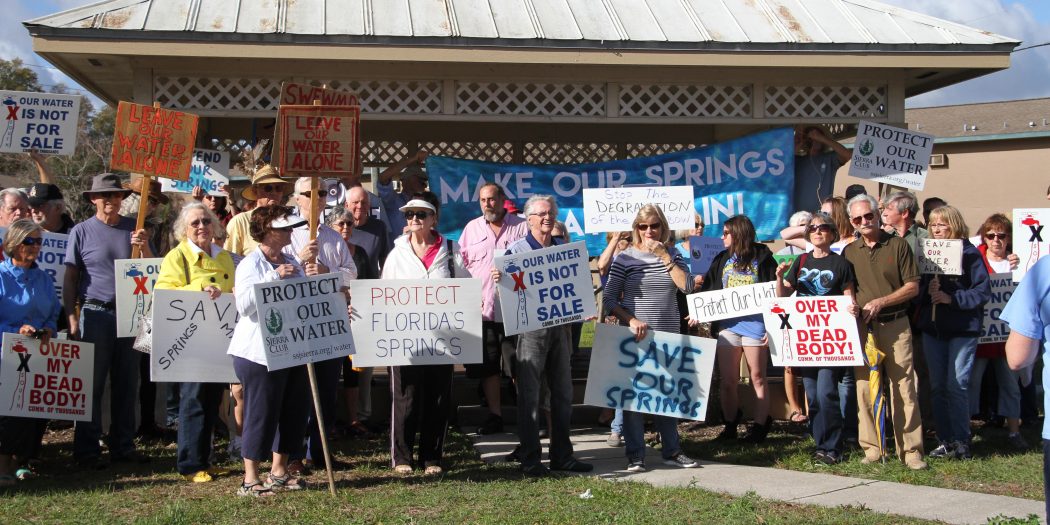 Many protesters outside the Dunnellon City Hall for the Southwest Florida Water Management District workshop. Some sat inside and outside, after the city hall reached maximum capacity. (Eric Heubusch/WUFT)

The Southwest Florida Water Management District held a public workshop at Dunnellon City Hall to discuss reducing the minimum flows, or MFL, of the Rainbow River Thursday. Those who attended wanted more than that.

“No additional impacts to Rainbow Springs are acceptable,” said Dr. Robert Knight. “The SWFWMD must adopt a recovery plan for Rainbow Springs to return up to 15 percent of its historic flow.”

Knight, president of the board of the Florida Springs Institute, brought handouts for those who came to voice their concern for the pumping of water from the Rainbow River. After waving signs along North Florida Avenue in front of the city hall, concerned citizens went inside the city hall and watched a presentation by SWFWMD staff.

“What we’re here to do today is set a MFL on Rainbow Springs,” said Eric DeHaven, assistant director of the Resource Management Division at SWFWMD. “We will protect 95 percent of the natural flow.”

SWFWMD has developed a model to predict the flow of the river and set a limit to the amount of water that’s allowed to be pumped from the river, DeHaven said. Dr. Matt Cohen, a University of Florida professor of hydrology, said the model isn’t perfect.

“There are some lingering questions that the district is well aware of,” Cohen said. “They did a really good job at describing the model, but it’s still missing the mark.”

Cohen, who reviewed the model for the district, said the river is flowing at less than 15 percent under expectation of the model.

“The district is allowed to issue permits up to the set limit of the MFL, if it passes it can cause significant ecological damage,” Cohen said. “I would want to know what is causing the reduction of flow before they set it.”

After the presentation, individuals took turns speaking in front of the audience. After the workshop, SWFWMD staff took questions.

A hearing in March will decide the MFL for the Rainbow River.

Eric Heubusch is a reporter at WUFT News in Gainesville, Florida. He is a senior at the University of Florida majoring in journalism.
@ericheubusch
Previous Feb. 24, 2017: Afternoon News In 90
Next Veterans Facing Difficulties Obtaining Benefits Want Issue Brought Into National Spotlight