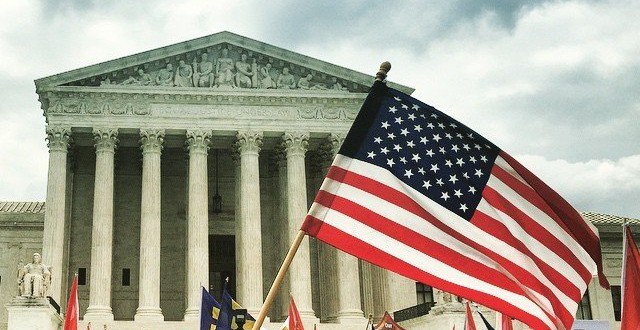 A crowd outside the Supreme Court in 2015 for its ruling legalizating same-sex marriage nationwide. A study published by JAMA Pediatrics this week found a 7-percent decrease in teen suicide attempts because of the legalization in certain states prior to the national ruling. (File/AP)

Teen suicide attempts decline with the legalization of same-sex marriage, according to a study published this week in JAMA Pediatrics.

Attempts among teens dropped by 7 percent in the past decade in states that permitted same-sex marriage before it was made legal nationally, the study found. The decline was nearly twice that among teens of sexual minorities.

“These studies … tell people that times are changing,” said Joe Antonelli, president of the Gainesville Community Alliance. “As people get more and more affirmed, those numbers will continue to fall.”

The study used data from the survey organization Youth Risk Behavior Surveillance System to analyze rates of suicide attempts among public high school students. The data were collected between January 1999 and December 2015 across 47 states, 32 of which permitted same-sex marriage before the 2015 Supreme Court ruling that legalized it nationwide.

Suicide is the second leading cause of death among young adults between the ages of 15 and 24, according to the study. Those of a sexual minority are at a greater risk.

Of the roughly 762,000 students who participated in the study, more than 231,000 identified as gay, lesbian, bisexual or unsure of their sexual orientation. Although these teens made up roughly 12 percent of the population, they comprised 34.1 percent of students who reported one or more suicide attempts in 2015.

In total, 29 percent of gay, lesbian and bisexual students attempted suicide in 2015, according to the Youth Risk Behavior Surveillance System. The attempt rate for heterosexual students was 6 percent the same year.

“We don’t talk about mental health enough,” said Amanda Lawson-Ross, a counselor at the University of Florida’s Counseling and Wellness Center. “To show that there are some things that can make a positive difference for [gay, lesbian and bisexual teens] is really important for people to know about.”

Hannah Willard, public policy director of Equality Florida, said that teens in sexual minorities face discrimination from their peers as well as from their families.

“They often face harassment and bullying in school, and they sometimes face rejection from families,” she said. “So LGTBQ youth are absolutely at risk for mental health issues and suicide.”

Meanwhile, two-thirds of Florida school districts do not have policies that explicitly prohibit bullying and harassment on the basis of sexual orientation and gender identity, according to Willard.

“LGTBQ youth are not receiving the support that they need,” she said. “LGTBQ youth especially need support and affirmation in their home lives and at school in order to prevent increases in suicide.”

The study in JAMA Pediatrics does not claim that the legalization of same-sex marriage has a direct causation to the drop in suicide attempts. The data also do not take into account other factors that may have had an influence, such as socioeconomic status or religious affiliation.

I am a second-year journalism student at the University of Florida focusing on online media and entertainment reporting. I hope to work in social media and magazine writing after graduation.
Previous Mosquito Researcher Barry Alto Turns Focus To Zika Fight
Next Feb. 23, 2017: Morning News In 90