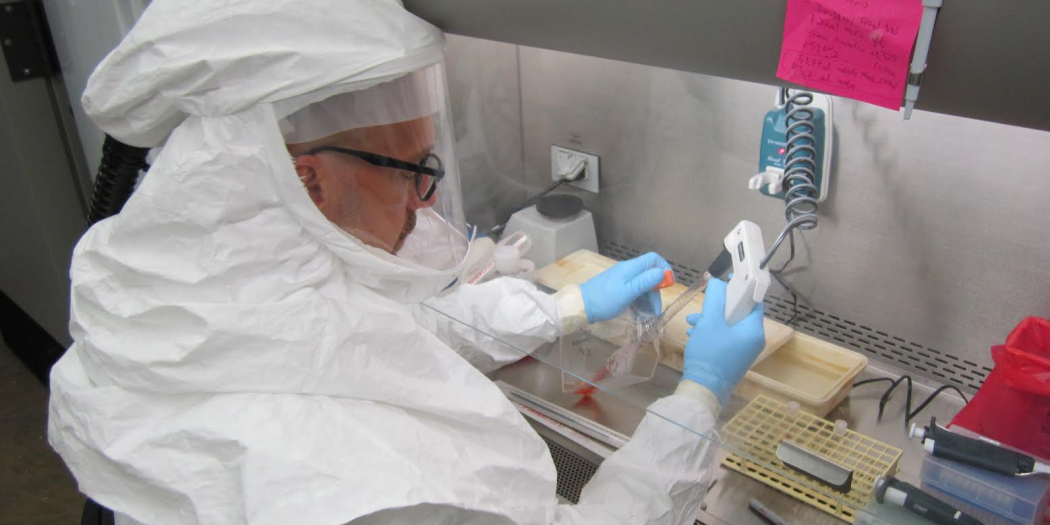 Barry Alto, an assistant professor of medical entomology at the University of Florida, works with a specimen inside a lab. A $200,000 grant will allow him and a team of researchers to improve Zika-virus detection. (Photo courtesy of Barry Alto)

Barry Alto, a University of Florida assistant professor of medical entomology and a mosquito researcher, said he jumped at the chance to apply his knowledge of mosquitoes to the good of public health.

Alto — along with research partner Steven Benner, founder of Gainesville-based Firebird Biomolecular Sciences LLC — has received a $200,000 grant from the Florida Department of Health to create a device that more effectively detects the Zika virus.

In 2016, Florida had about 1,272 confirmed cases of the virus, 256 of which were transmitted within the state, according to the United States Centers for Disease Control and Prevention.

WUFT News recently talked with Alto by phone about his research.

WUFT: Can you give some background on how your research on Zika detection came about?

Alto: We are trying to meet these challenges in public health by developing improved assays, and we’re going to do this for [the] Zika virus. We also want to do tests where you could test more than one of these mosquito-borne viruses. And the ones that are emerging right now [in Florida are the] Zika, chikungunya and dengue virus.

And we’ve seen that over the last 10 years or so … huge numbers of imported cases as well as local transmission. There are a lot of aspects of Florida and other Gulf coasts that make these areas more likely to be at risk for transmission in the future.

You received a $200,000 grant from the Florida Department of Health to improve the tests for the detection of Zika virus. What does that actually mean, to “improve the tests”?

Ideally, you want something that’s user-friendly, cheap and accurate, right? These are things that appeal to intuition, and anyone would say, “Yes, that makes good sense.”

Well, we’ve tried to take that appealing intuition and build a test like that. And I should say, this test that we’re gonna do, it’s not an antibody-depending test that tells whether you’ve been infected in the past. That’s something different.

So it’s a snapshot in time. But it does definitely tell whether there is an infection or not. By some of the conventional techniques, you would need to acquire a sample, you need to do a special preparation of the sample … and then you need to have a specialized lab and expensive, specialized equipment to do it.

So you might have to send the sample to a lab that does it, and you need to have a specialized personnel that knows how to work this. All of this stuff takes time.

At the end, this has the potential to improve public health [and] also to improve strategic deployment of limited resources for mosquito control. We hope that maybe in the future … it might lead to some changes in public-health policies.

Earlier in the conversation, you briefly mentioned that the technology [to detect Zika] will be a hand-held device. Can you elaborate on that?

Right now, it’s being printed on a 3D-image printer. You can hold it in the palm of your hand, and it’s rectangular in shape. And the rectangular shape has four different slots where you can put micro-centrifuge tubes in.

You can drop a sample in it, and in theory, it should do a color change [such as bright yellow for positive].

You mentioned chikungunya and dengue, too.

We really want to move beyond just Zika virus because if a person comes in and they’re feeling lousy, and instead of a physician ordering up 20 different tests each costing $200, wouldn’t it be better to have a single tube test that tests multiple ones that are the big candidates? So we can test multiple types of viruses in a single tube assay. You will get your result in less than an hour.

I can hear the motivation and passion in your voice. What’s the driving force for you?

I’m an ecologist, and I happen to work with mosquitoes. This is a chance for me to work on something that’s of practical importance.

Especially with Zika, what we’re seeing is there is a big need in terms of surveillance. Pregnant women who are infected with Zika virus — they can’t wait four to six weeks to get the results of their tests. They need the results of the test right now.

So there was this big need. I saw it out there, and I saw an opportunity that I could actually do some good for.

Janine Wolf is a reporter with WUFT News. She can be contacted by calling 407-928-6317 or emailing janinewolfj9@gmail.com.
@@janinewolfj9
Previous 2 Florida Congressmen Heckled At Public Meetings
Next With Legal Same-Sex Marriage, Teen Suicide Attempts Drop, Study Finds