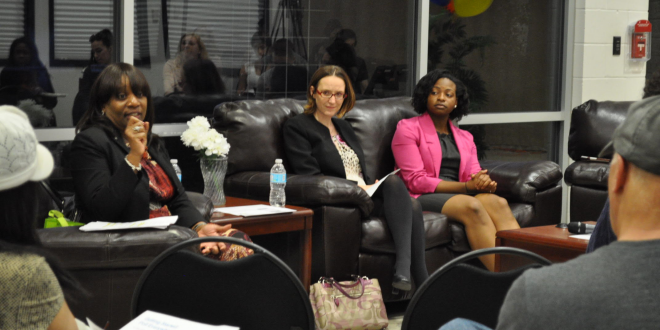 (From left) Versie Johnson-Mallard, Stephanie Staras and Brianna Aldridge discuss the importance of the HPV vaccine at Tuesday's "Our Community, Our Health" event. HPV can cause cancer, the panelists said, so parents and children alike should be aware of the vaccine's benefits. (Ashleigh Braun/WUFT News)

HealthStreet, a community-engagement program at the University of Florida, hosted a “Our Community, Our Health” event Tuesday evening, aimed at discussing how the human papillomavirus vaccine Gardasil can prevent various types of cancer.

Three panelists — two medical researchers and one community member — shared findings with the 15 or so attendees at the organization’s office on Old Archer Road on the safety of Gardasil, explained who should receive the vaccine and described the type of cancers that can be prevented by it.

“About 95 percent of any of our population at any given time that’s sexually active has been infected with HPV,” said panelist Versie Johnson-Mallard, chair of the Department of Family, Community and Health System Science at UF. “I always say that the person if you look to your left and you look to your right, one of those persons has been exposed to HPV and is HPV positive.”

HPV is a sexually transmitted virus that can be low-risk (genital warts) or high-risk (cancer). It usually goes away on its own and may not cause any health issues, but if it stays and is untreated, the virus can lead to the aforementioned problems, according to the Centers for Disease Control and Prevention.

Johnson-Mallard said there are more than 175 different strands of the HPV virus, with Gardasil offering protection from nine of the more prevalent strands.

HPV is an important topic to discuss, Johnson-Mallard said, because it is so widespread in U.S. communities: For example, one in 10 girls is infected with the virus.

The current vaccination rate in the United States is about 30 percent, but the goal of health advocates is to get that number higher and to make sure patients get not only the first shot but the follow-up ones, too, said panelist Stephanie Staras, an assistant professor of health outcomes and policy at the UF Institute for Child Health Policy.

“We knew the problem was: 30 percent of the population will come and get the first shot, but they may not get the second or third,” she said.

To combat this, Gardasil now comes as Gardasil-9, a shot that requires only two injections taken four months apart, as opposed to three injections over a six month span.

Staras said she hopes the change to two injections in four months will lead to a higher rate of people taking the vaccine.

The key to preventing the contraction of HPV is getting vaccinated at a young age, but this can be difficult because it involves opening a stream of communication between parents and children about a topic that may make some people uncomfortable, Johnson-Mallard said.

The recommended age for vaccination is 11 to 12, she said, and for boys and girls under 18, consent is needed from the parents, who often have misconceptions about the HPV vaccine.

“In my research, we recognized that it’s the parents we have to reach,” she said.

Attendee Lauren Munsey, 23, said she thinks the problem is that parents don’t feel comfortable talking to their children about HPV.

“My experience with HPV was that it was talked about when I was very young, like 12 or 13, and the way you get HPV was not on my mind at that time,” she told those gathered. “My school foolishly believed abstinence was the way to teach your children things, so I couldn’t get information from my school. My mother wasn’t really thinking about these things either.”

HealthStreet’s “Our Community, Our Health” events are important because they encourage fluid conversation between health professionals and community members, UF HealthStreet spokesman Erick Edwing said. The organization’s main mission, he said, is to link community members to social services, medical services and opportunities to participate in research relevant to them.

“It takes 17 years, on average, for health research to be put into practice, so really what this town-hall initiative does is share the findings back and discuss it with the community members,” he said.

“There’s a lot of misconceptions and misunderstanding about the HPV vaccine, so we are inviting health experts from UF to really debunk some of the myths or concerns that people might have, especially among parents in the community.”

Ashleigh Braun is a reporter for WUFT News and can be reached at 954 551 5626 or abraun215@ufl.edu.
@@ashleighbraun2
Previous Feb. 23, 2017: Morning News In 90
Next Gainesville Hosting Conference On Improving Florida Art, Culture