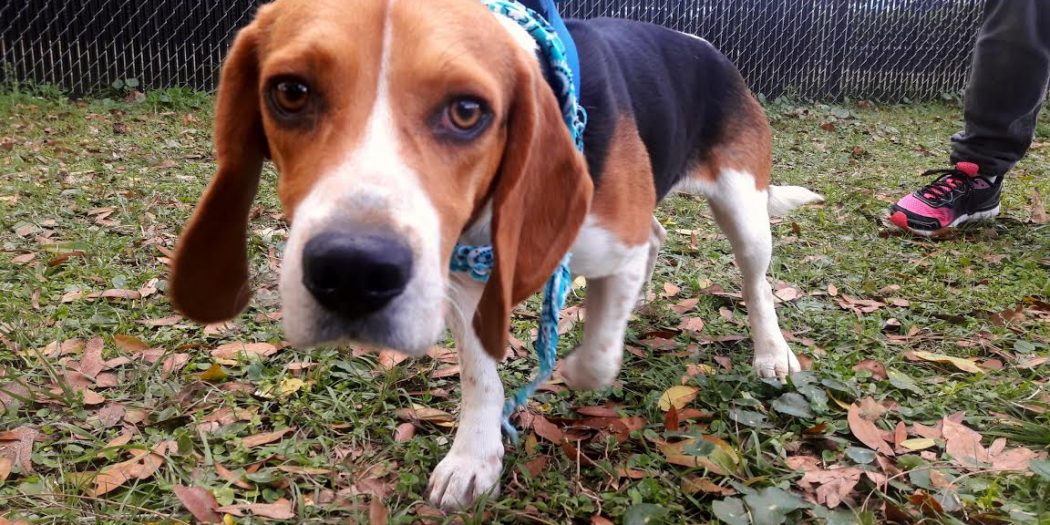 A young beagle named Sherlock goes for a walk at the Alachua County Humane Society where he awaits adoption. Florida lawmakers filed a bill Feb. 17 that would create a statewide registry for animal abusers (Ramsey Touchberry / WUFT News).

When Calypso first arrived to Haile’s Angels Pet Rescue, she had just been saved from a drug deal gone bad.

“She was a Catahoula-Great Dane mix,” said Karen Kneiss, an employee at Haile’s Angels Pet Rescue. “She was beautiful; prettiest dog I’ve ever seen. She had a very big stab wound just underneath her neck, so we took her in and kept her for several weeks before we adopted her out.”

House Bill 871, filed on Friday by Democratic Rep. Jared Moskowitz and Republican Rep. Blaise Ingoglia, would require convicted animal abuse felons to be entered into a public registry. Pet stores, humane societies and other animal shelters would be required to verify that potential purchasers or adopters are not on the registry.

Shelters like Haile’s Angels have an application process and ask the potential adopter questions before approving them. However, stores and shelters have no way of knowing for certain whether that person has been convicted of an animal abuse related crime.

If passed, the Florida Department of Law Enforcement would create and maintain a public registry on its website. Anyone who is convicted of felony animal abuse starting Jan. 1, 2018, will have their name and picture posted on the site for two years. If they have a subsequent conviction, their information will remain for an additional five years.

If a store or shelter sells to someone on the list, they could be charged with a second or first degree misdemeanor and a possible $2,500 fine, depending if they’ve had prior offenses.

As of now, Tennessee is the only state who has a statewide registry. Only two counties in Florida have local county registries: Marion and Hillsborough.

Linda Little Wolf, an animal advocate and founder of the Florida Animal Abuser Registry Movement, started advocating for local registries in 2015. She helped craft the ordinances in Marion and Hillsborough County that are law today.

“The more counties that I could get to pass county-level animal abuser registries in local government, the more it would start a domino effect across the state,” Little Wolf said. “It would wake up our state legislators and make them aware that this is absolutely necessary.”

Although Little Wolf believed it is a good step in the right direction, she said she wants to see animal abusers banned from owning animals. As written, the bill would only prevent animal abusers from buying or adopting new animals, but does not mention anything about owning animals in general.

Both Little Wolf and Moskowitz pointed to evidence that suggests a direct correlation between people who are habitual animal abusers and those who end up becoming a child, spousal or sexual abuser.

Other Florida residents have taken matters into their own hands. Kim Townsend, founder of the National Do Not Adopt Registry, posts information about people who have been accused by their fellow neighbors. As long as they provide Townsend with sufficient evidence – a photo or video of the accused person abusing an animal – she will post their information on her registry.

Little Wolf agreed the bill is a step in the right direction, but said it is not as strong as what she’s helped create in Marion and Hillsborough County. She said she will continue advocating for stricter, harsher punishments.

Ramsey is a reporter for WUFT who can be reached by calling 352-392-6397 or emailing news@wuft.org.
Previous Senate Bill Would Make Recess Mandatory for Florida Elementary Schools
Next Gainesville Set To Host Second Kinetic Derby Saturday