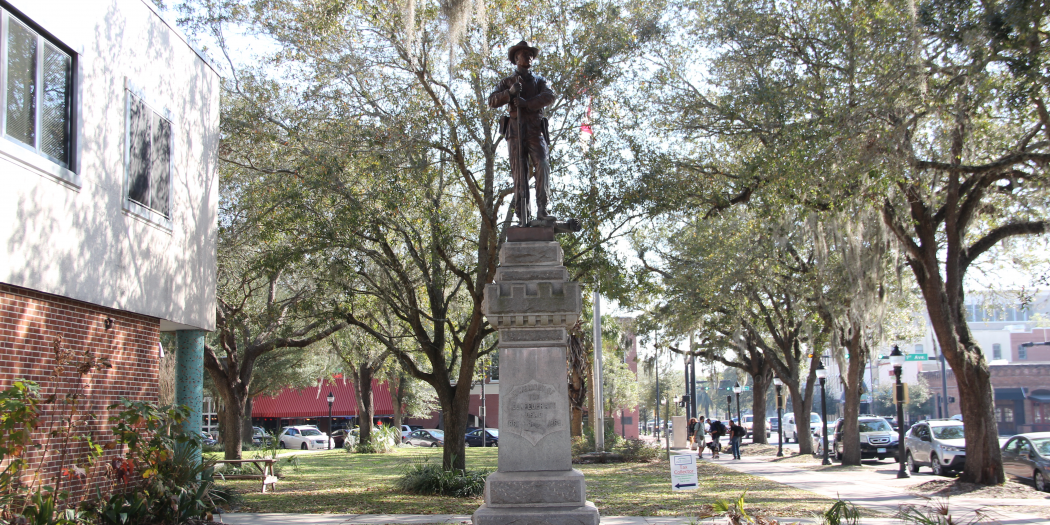 Matheson No Longer An Option For “Old Joe”

After months and months of negotiations, Alachua County is no longer considering moving the confederate statue to the Matheson History Museum.

The county initially began discussions with the Matheson to relocate”Old Joe” in January 2016, but the museum eventually declined in October. The county tried again in January 2017, passing a motion to meet with museum board members to discuss the conditions that would allow the statue to be moved to the Matheson.

The following Monday the county announced, in a policy meeting, the Matheson was no longer a possible destination for Old Joe.

“The only spots that it could go is right in front of the museum, or in the parking lot, or in the retention pond – that’s clearly not a good option, or in front of the 1987 Matheson House, which would alter the historical character of that property,” Macdonald said.

“When we told the commissioners that on Tuesday night, it was just a whole new wrinkle they hadn’t expected, Macdonald said.

Although Old Joe won’t be moved to the Matheson, the commission passed a motion Tuesday to explore other options for the relocation of the statue.

Macdonald said funding for the statue would be a complicated issue.

The United Daughters of the Confederacy, the organization that raised the funds for “Old Joe” to be erected in 1904, recently sued in another state when a Confederate statue they had donated was moved, Macdonald said. It’s important the county finds out what the UDC thinks about the possibility of “Old Joe” being relocated.

Nansea Markham Miller, president of Gainesville’s UDC Kirby Smith Chapter No. 202, said she and her chapter want the statue to remain where it is.

Virginia Fettes, who has been a member of the UDC since 1974, is also opposed to relocating the historic statue.

“We’re honoring veterans with that statue, and we just don’t want to disrespect any veteran,” Fettes said.

The historical commission reached out to University of Florida professors who could provide authoritative input on what would be most appropriate for the plaque to include. One of these professors, Matthew Gallman, agreed to help.

Gallman, professor of history, said the plaque is a good idea as long as it meets some basic standards.

“I think that if you’re going to put up a plaque, it ought to communicate three periods of history, not just the Civil War,” Gallman said.

First, Gallman said, the plaque should explain the Civil War and mention old Gainesville and the status of slavery in Gainesville at that time. Second, it’s important it talks about the history of when the monument went up, which was 1904.

“Why is it that 50 years after the Civil War, Gainesville put up a monument to celebrate Confederate veterans?” Gallman said. “I think we can imagine some reasons.”

Finally, Gallman said, the plaque should convey what’s happening now, so 10 to 20 years from now people can know why the plaque was made and what incited it’s creation, which was a mass shooting in Charleston, South Carolina in 2015 by a man associated with white supremacy and Confederate symbols.